Readers of this column already know I'm a big fan of Adam S. Miller, the author of several thoughtful and groundbreaking books on Mormon belief. Don't be fooled by the books' waifishly thin size: these brief and inviting explorations will always, always make you think more deeply about faith.

Now Deseret Book has gotten into the act, republishing one of my favorite of Adam's books, Letters to a Young Mormon. I loved this when it came out, naming it one of "7 Mormon books that changed the conversation in 2014." And now it's even better, with some expanded material that should continue changing the conversation in 2018. -- JKR

RNS: Letters to a Young Mormon clearly struck a chord with Mormon readers. Were you surprised by the reaction to the first edition?

Miller: Yes, I am surprised. The book does have a practical flavor, but it’s also clearly written by a philosophy professor, and clearly geared around my own sometimes idiosyncratic concerns. I’m not overly-surprised that there’s a subset of educated, middle-aged Mormons who have resonated with it, but I have been really surprised by how broad the audience seems to be, including actual teenagers who have read it and said it meant a lot to them.

RNS: Have you heard from many young people about the book?

Miller: We did an event a few weeks ago at Writ & Vision, and for the panel we found real, live young Mormons to respond. Among others, we had a boy who was 16 and a girl who was 17, and both of them volunteered. They had read the book previously, and marked it up. And when they stood up to talk about it, it was clear that the parts of the book that mattered most to me also mattered to them. And it was clear that they hadn’t had any trouble understanding what I was after.

RNS: What did they say?

Miller: One of them talked about the chapter on faith, especially about how faith involves trusting God with your life instead of trying to force your own stories onto the life that God is trying to give you. And one picked the chapter on hunger, saying that he’d never thought about hunger as central to what it means to be human, and that it really helped him to think differently in general about his body, especially in terms of the way the body factors into his lived experience of religion.

RNS: I like that chapter too. Considering that Mormon theology has this really positive view of the body—even saying that spirit and matter are one and the same—Mormons spend a lot more time on taming or shaming the body than focusing on it as a gift from God.

Miller: It seems like we often default to some puritanical and platonic notions of the body that still have some cultural capital but aren’t especially helpful, and don’t match up very well with some key Mormon doctrines. 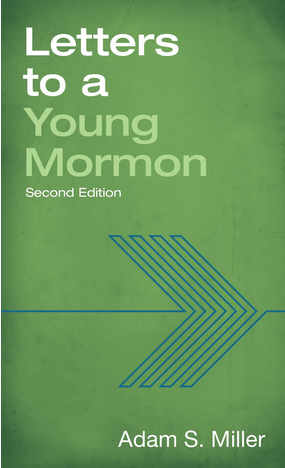 RNS: Why did you want to do a second edition?

Miller: The answer to that is pretty easy: it was a chance to publish with Deseret Book this time, and reach a much bigger audience than we did with the initial edition. We proposed it to them, but they were immediately interested, and they said in fact that they were only willing to do it if it was a two-book deal. That second book is coming in May, and it’s called An Early Resurrection: Life in Christ Before You Die.

I had a really good experience with Deseret and my editors there. We expanded the second edition, and I tweaked some things in the book in response to edits and suggestions. I feel confident that both books are significantly better because of the close and careful feedback I got from my editors at Deseret.

RNS: What new material did you add?

Miller: There’s one new chapter on the Sabbath day, and one on stewardship, especially environmental stewardship.

RNS: Thank you in particular for adding that Sabbath chapter! I have to teach a Relief Society lesson on the Sabbath this Sunday and you can bet I’ll be reading from it.

Miller: I hope that happens a lot in the next few months! But it was just an accident that it was in the new edition of the book and is also now in the curriculum.

But it’s also no surprise that we’ve emphasized the Sabbath as a Church. It seems to me that if there’s one thing that defines what it means to be a Mormon, it’s the fact that you show up on Sunday. Sabbath day worship is a crucial part of our shared religious experience. This chapter on the Sabbath day—on how the Sabbath interrupts the normal flow of time to let a little bit of eternity sneak into time—is also a nutshell preview of the thesis of my other book, An Early Resurrection, that’s coming out in May.

RNS: Let readers get in your head a little bit as a Mormon: What is your own favorite spiritual practice?

Miller: There are two different flavors, I think. On the one hand, prayer. Especially prayer as the practice of listening in silence. That’s been increasingly important to me. But that ends up being a pretty private, lonely kind of thing a lot of the time.

Family Home Evening, though, is also really crucial for me. We don’t have it every week, but we do have it most weeks, and it feels to me like one of the most religiously significant things that I do. I think that has to do with the size of the experience—it’s not me alone in my closet, but it’s not me in a congregation of 200 people either. It’s me in my living room with the people I love most, talking about the things that matter most.

RNS: What is your least favorite? What spiritual practice do you totally suck at doing?

Miller: I’m terrible at missionary work. Partly, I’m just a shy and relatively introverted person, but partly I just don’t know where to start with people. I don’t know how to straightforwardly connect what matters most to me about Mormonism with what the missionaries want to say about Mormonism. It’s not clear to me how to do that, even if I knew people who were obviously interested. Even as a missionary it generally felt to me like I was trying to answer a question that people weren’t asking.

RNS: What’s your calling right now in the Church?

Miller: I am the 17-year-old Sunday School teacher. My daughter is in my class right now. I’ve been doing that for maybe three years.

Miller: So you’re working on the front lines with GenZ Mormons. Any impressions about them, as a whole? I am writing about Millennial Mormons right now, so I’m very much wondering what the generation that follows them will be like.

Miller: My impression is that we need to take seriously the moral core at the center of this generation’s questions and concerns, maybe especially when it comes to the church. It’s always felt to me like the questions and concerns I have about the church have grown directly out of what the church has taught me to be concerned about. It’s the best of Mormonism that has taught me to be worried about the parts of Mormonism that don’t seem to be working; it’s not an external critique.

And I think that’s true for this generation too. Their very moral questions, especially as related to equality, grow directly from the fact that Mormonism has been successful in teaching them to be compassionate and to care about things like justice and equality. Their concerns about our religion feel religious to me. It doesn’t feel to me like they’re simply being seduced by a secular narrative.