PARIS (RNS) — If you’re a Protestant married to a Catholic in Germany, you might be able to receive Communion along with your spouse in the Catholic Church. Then again, you may not be welcome to do so, or you could find yourself simply unsure.

This confusing situation, created by a proposed change to the tradition that the Catholic Eucharist was “for Catholics only,” leaves German Catholicism caught between its majority’s desire for a relaxation of the rules — a view shared by Pope Francis — and the limits to change in the world’s largest church.

In February, the German Catholic bishops approved draft guidelines for priests on when they may distribute Catholic Communion to Protestants attending Mass, signaling a new openness. But the guidelines immediately sparked a tussle between reformers and conservatives and surprising flip-flops from the Vatican.

Since then, some dioceses have reflected the new attitude toward inter-Communion on their official websites. Other churches hardly post even a passing reference to it. Meanwhile, a debate has gripped the country’s Catholic Church, exacerbated by mixed signals from the Vatican.

The question of inter-Communion, which hardly arises in many other countries, is a recurrent one in Germany. The country’s Christians are almost evenly divided between Catholics and Protestants (mostly Lutherans), and many marriages cross denominational boundaries. As a result, many German Protestants already receive Communion with their Catholic spouses, often with the agreement of their parish priest. They do so discreetly, however, because the Vatican seemed opposed to it and because many church leaders fear that officially condoning individual exceptions could be a slippery slope toward full doctrinal change.

“Apparently Catholicism’s ecumenical principles and their inclusive understanding of the church … are still foreign to some people 50 years after the Second Vatican Council,” complained Bishop Gerhard Feige, the bishops conference delegate for ecumenical relations and a co-author of the guidelines.

Pope Francis has taken a more flexible approach to interpreting Catholic canon law than his conservative predecessors and has made better relations with other Christians a priority.

Thinking the time was right to tackle the issue, the German bishops conference — led by Munich Cardinal Reinhard Marx, a senior papal adviser — drew up a 38-page “pastoral guide” meant to help priests lead mixed couples to a solution.

The Protestant spouse must share the Catholic understanding of Jesus Christ’s real presence in the Eucharist — to which Lutheran doctrine is close — and be in “severe spiritual distress” by being excluded from it, it said.

A large majority of the bishops present — 47 out of 60 — voted in February to publish the document, titled “Walking with Christ —  Tracing Unity,” in the near future. A month later, seven dissenting bishops led by Cologne Cardinal Rainer Maria Woelki asked the Vatican to rule whether the guidelines violated Catholic doctrine and the unity of the worldwide church.

In an April 10 letter marked “strictly confidential,” Vatican officials asked the Germans not to release the document, at least not yet. They called Marx, Woelki and four other bishops to Rome for a closed-door meeting with its top officials for doctrinal and ecumenical affairs.

The officials told them on May 3 that the pope thought the document was “not ready for publication” and wanted them to “find as unanimous an agreement as possible.”

In late May, the Vatican reiterated the pope’s doubts about publishing the document in a personal letter to Marx, which was leaked to conservative Catholic media before the cardinal even received it. Rome suddenly seemed to be backing away from the changes.

A heated debate ensued with suggestions of splits within the bishops conference and between Germany and Rome. “Many people are very disappointed and the damage this has done cannot be estimated. Old wounds have been reopened, bitterness and resignation are spreading,” wrote Feige.

Citing “an underground civil war” between church reformists and conservatives, Marco Politi, a veteran Italian-German observer of Vatican affairs, told the Hamburg weekly Die Zeit: “The German bishops conference may have a progressive majority, but the world church doesn’t.”

The world church and the Curia, he said, are “putting on the brakes.”

Pope Francis finally spoke about the issue in public on June 21 on his flight back to Rome after a day highlighting ecumenism at the World Council of Churches in Geneva.

“Maybe this wasn’t the right information at the right time. There was a little bit of confusion,” he admitted to journalists.

Catholic canon law has always allowed inter-Communion in exceptional cases, he said, and bishops have the power to decide if non-Catholics in their diocese can receive it.

The problem was that the Germans wanted to issue the document in the name of the national bishops conference, a procedure the code does not allow. “Why? Because something approved by a bishops conference immediately becomes universal,” Francis said.

With that explanation, the German bishops met again in late June and decided to publish the guidelines as an unofficial text to help individual diocesan bishops decide how to handle the issue. 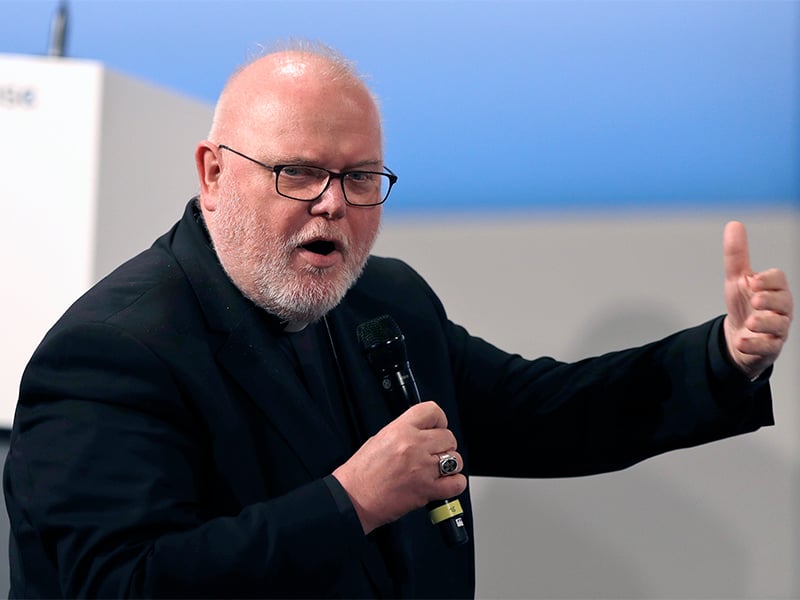 “There’s been a lot of confusion,” Marx said. “It’s not about a general invitation to Communion. This is a help for interdenominational couples to think hard about their faith and lives so they can reach a responsible decision.”

Left to decide how to handle this, some bishops have welcomed the new guidelines warmly. “Interdenominational couples and families are as dear to us as ecumenism,” said Paderborn Archbishop Hans-Josef Becker.

In nearby Münster, the diocese decided to wait until autumn to decide.

Bamberg Archbishop Ludwig Schick, one of the seven bishops who complained to the Vatican, said his diocese would follow the guidelines but hinted it would interpret them strictly.

Meanwhile, Germany’s Protestant churches — which mostly allow Communion for all Christians — have mostly kept a discreet silence about the Catholic dispute, which came as a surprise after ecumenism seemed to reach new levels during events marking the 500th anniversary of Martin Luther’s Reformation last year.

Bishop Heinrich Bedford-Strohm, head of the Evangelical Church in Germany (EKD), stressed that Pope Francis said the German guidelines were “not a brake” to further cooperation among Christians.

“Luckily, the swan song for ecumenical progress that some have started singing has turned out to be premature,” he said.