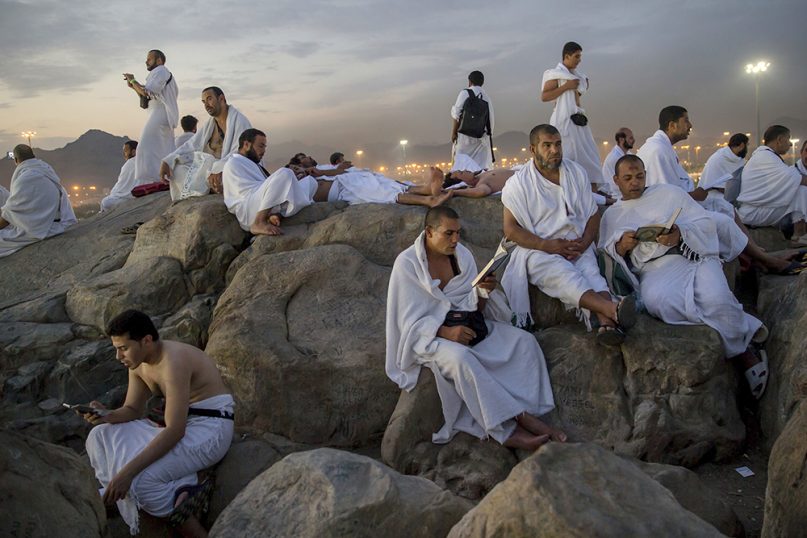 Muslim pilgrims pray on the Jabal al-Rahmah, or the mountain of forgiveness, at Arafat for the annual hajj pilgrimage outside Mecca, Saudi Arabia, on Aug. 20, 2018. More than 2 million Muslims have begun the annual hajj. The five-day pilgrimage represents one of the five pillars of Islam and is required for all able-bodied Muslims once in their lifetime. (AP Photo/Dar Yasin) 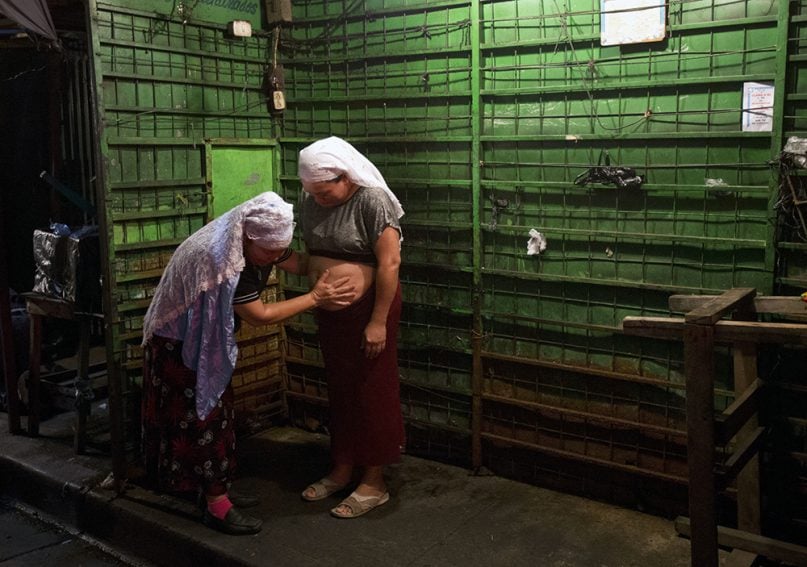 A woman prays over the belly of another woman at a prophetic church service held in a closed street market in San Salvador, El Salvador, just after midnight on Aug. 21, 2018. (AP Photo/Rebecca Blackwell) 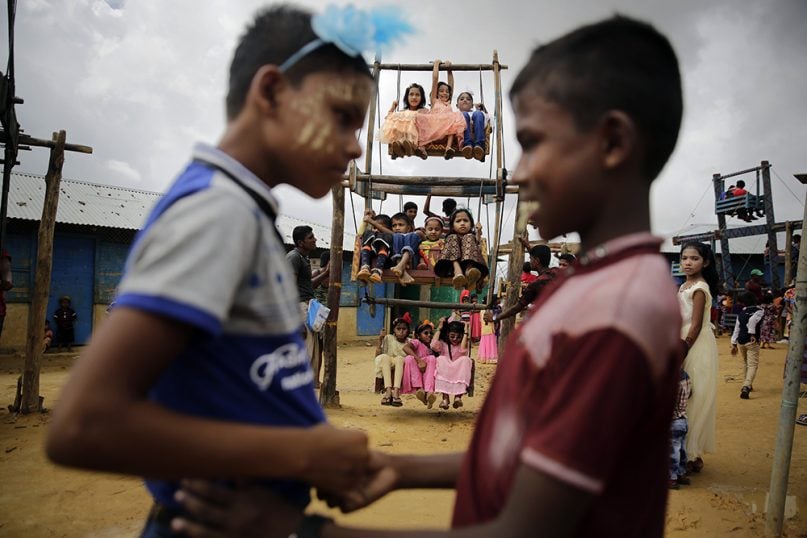 Rohingya boys greet each other as girls enjoy a ride on a ferris wheel, brought to the Kutupalong refugee camp for Eid al-Adha celebrations on Aug. 22, 2018. Hundreds of thousands of Rohingya Muslim refugees are celebrating Eid al-Adha in sprawling Bangladeshi camps where they have been living amid uncertainty after they fled Myanmar to escape violence and a massive crackdown. (AP Photo/Altaf Qadri) 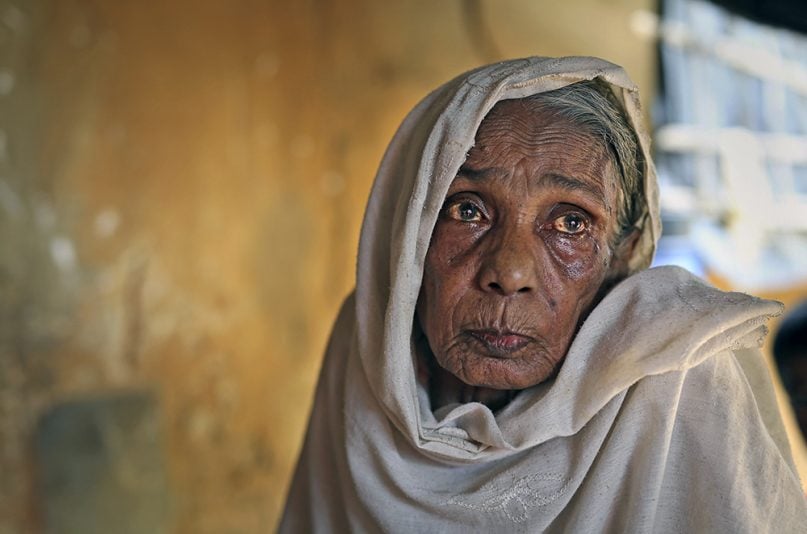 Rohingya refugee Dildar Begum, 71, waits for a call from her son, still in Myanmar, on Eid al-Adha at Kutupalong refugee camp, Bangladesh, on Aug. 23, 2018. One year after she fled amid Myanmar’s brutal military crackdown, she fears for the life of her son, who didn’t call. Despite months of discussion among leaders in Myanmar, Bangladesh, the United Nations and many aid agencies, there are few signs that the Rohingya can return home soon. (AP Photo/Altaf Qadri) 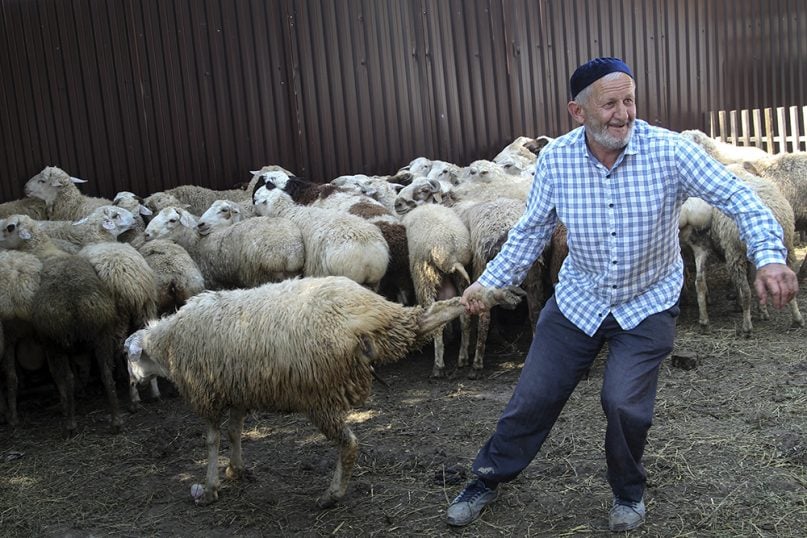 A Chechen Muslim chooses a sheep for sacrifice during Eid al-Adha in the Chechen regional capital of Grozny, Russia, on Aug. 21, 2018. (AP Photo/Musa Sadulayev) 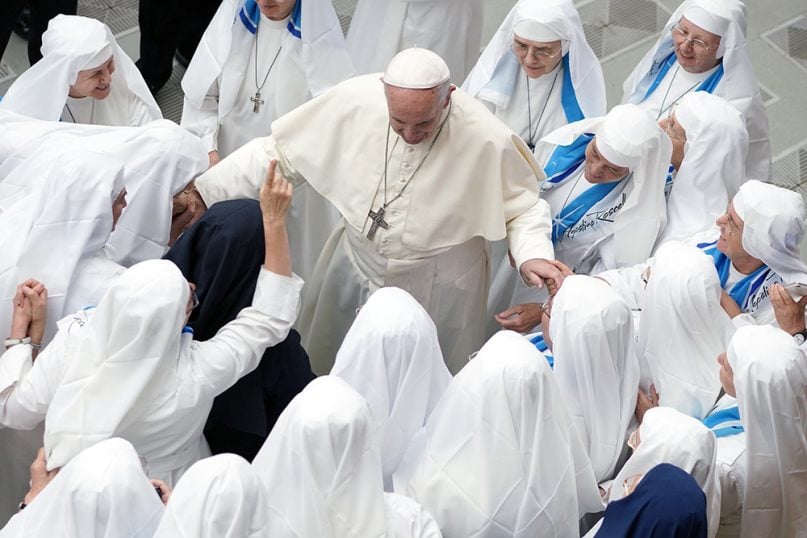 Pope Francis is greeted by a group of nuns during his weekly general audience in the Vatican’s Paul VI Audience Hall on Aug. 22, 2018. (AP Photo/Andrew Medichini) Pigeons fly as Afghans prepare to offer Eid al-Adha prayers outside the Shah-e-Dushamshera mosque in Kabul, Afghanistan, on Aug. 21, 2018. During Eid al-Adha or the Feast of Sacrifice, Muslims slaughter sheep or cattle and distribute portions of the meat to the poor. (AP Photo/Rahmat Gul) 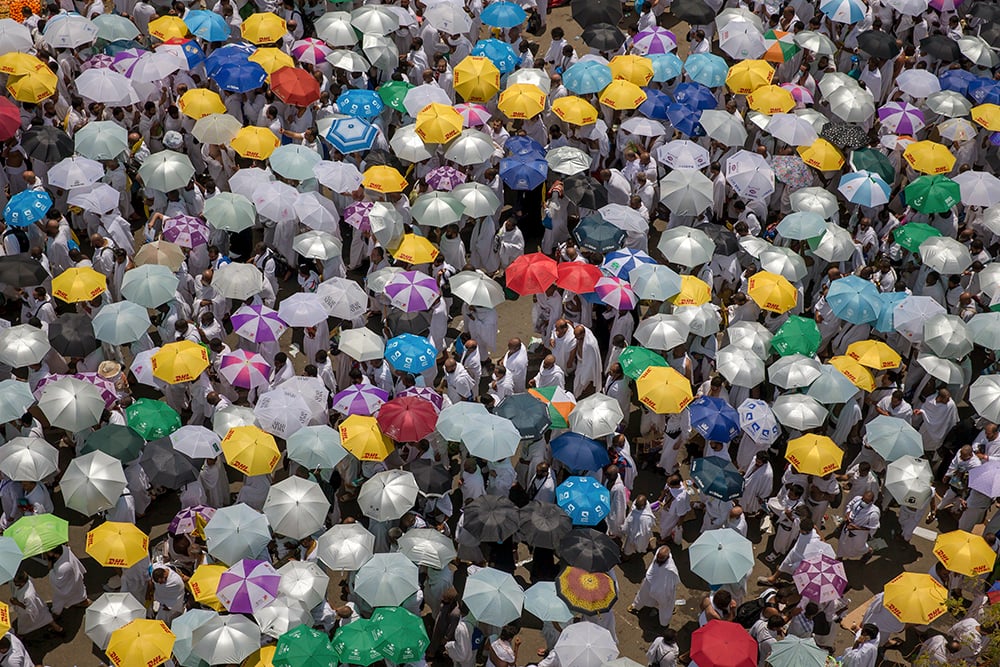 Muslim pilgrims leave after offering noon prayers on the road near the Namirah mosque on Arafat Mountain during the annual hajj pilgrimage outside Mecca, Saudi Arabia, on Aug. 20, 2018. (AP Photo/Dar Yasin) 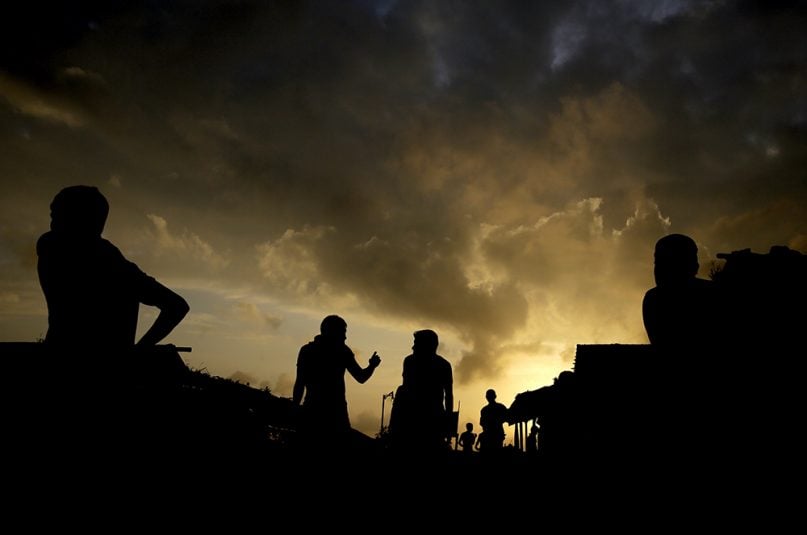 Rohingya are silhouetted against the sky at Kutupalong refugee camp in Bangladesh on Aug. 22, 2018. Built more than 20 years ago by smaller waves of Rohingya refugees, the camps in Cox’s Bazar District exploded in size last year when Myanmar’s army launched attacks around Aug. 25, prompting hundreds of thousands of Rohingya to flood across the border. (AP Photo/Altaf Qadri) 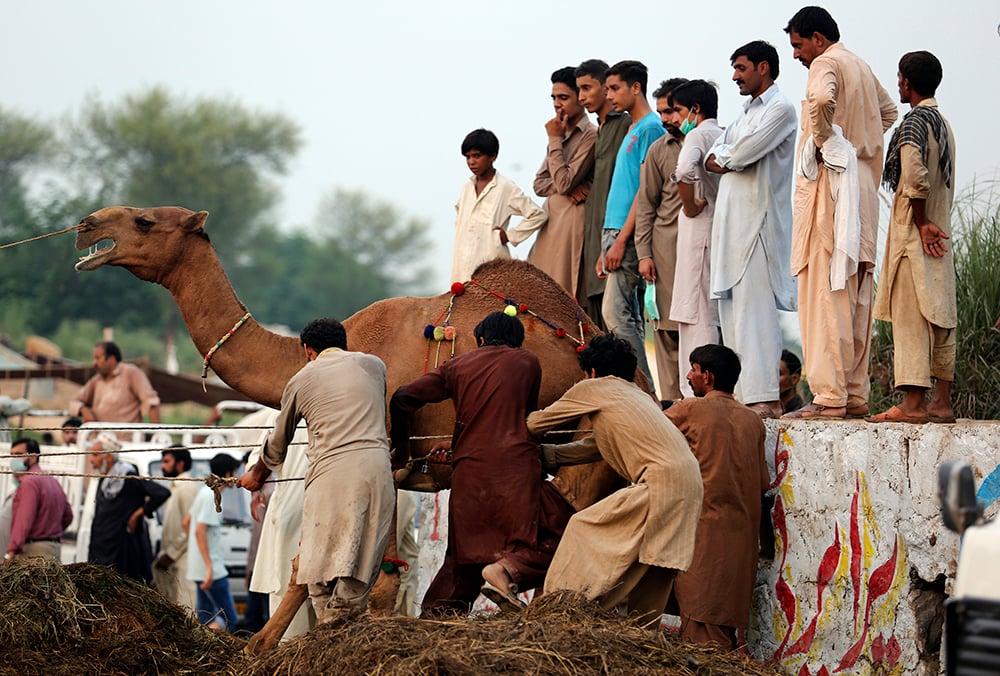 Muslims in Islamabad struggle to load a camel they bought for Eid al-Adha onto a truck on Aug. 20, 2018. Eid al-Adha marks the willingness of the Prophet Ibrahim (Abraham to Christians and Jews) to sacrifice his son. (AP Photo/B.K. Bangash) 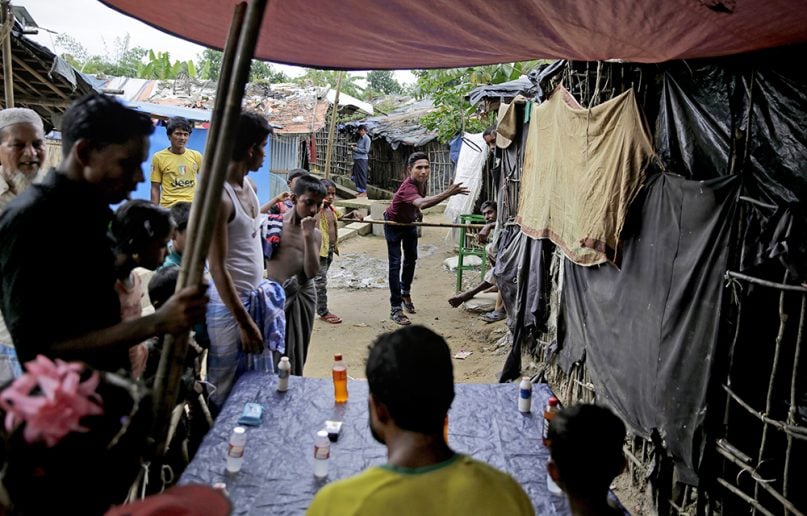 Rohingya refugees play a game at Kutupalong refugee camp in Bangladesh on Aug. 23, 2018. A year after about 700,000 Rohingya Muslims fled attacks by Myanmar security forces and Buddhist mobs, the divided community, some in Bangladesh and some in Myanmar, sees little hope that their lives will improve. (AP Photo/Altaf Qadri) 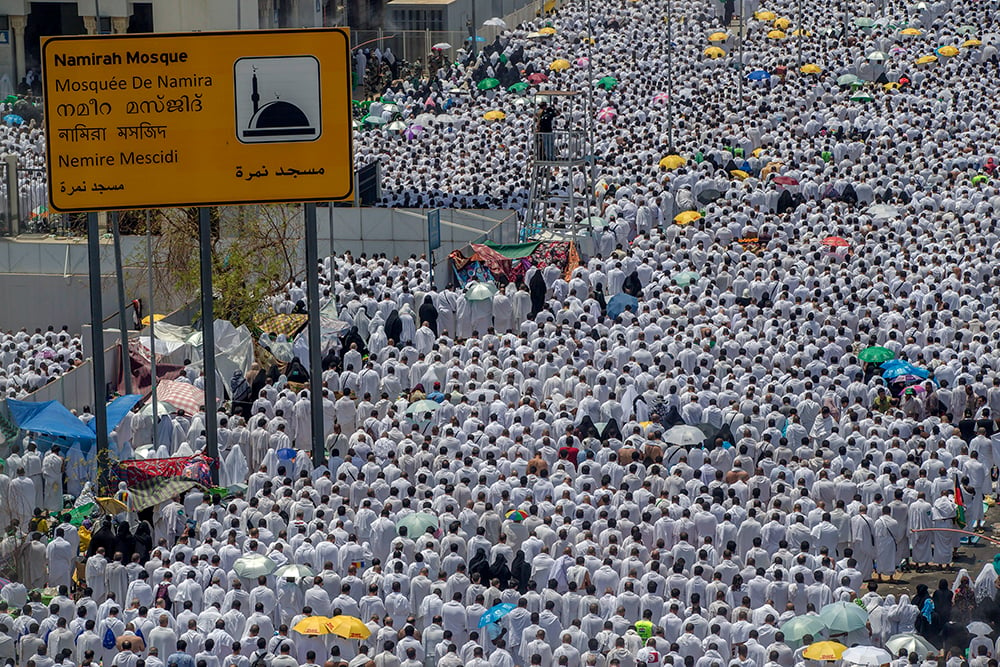 Muslim pilgrims attend noon prayers on the road near the Namirah mosque on Arafat Mountain during the annual hajj pilgrimage outside Mecca, Saudi Arabia, on Aug. 20, 2018. (AP Photo/Dar Yasin) 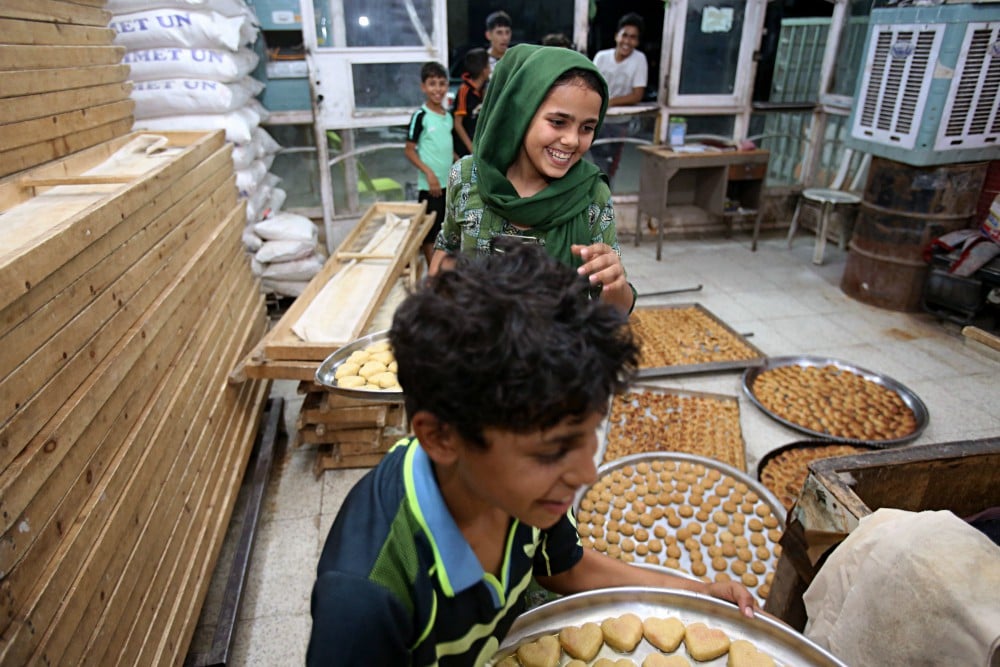 People gather at the bakery to bake Eid cookies in preparation for Eid al-Adha in Baghdad, Iraq, on Aug. 20, 2018. (AP Photo/Karim Kadim) 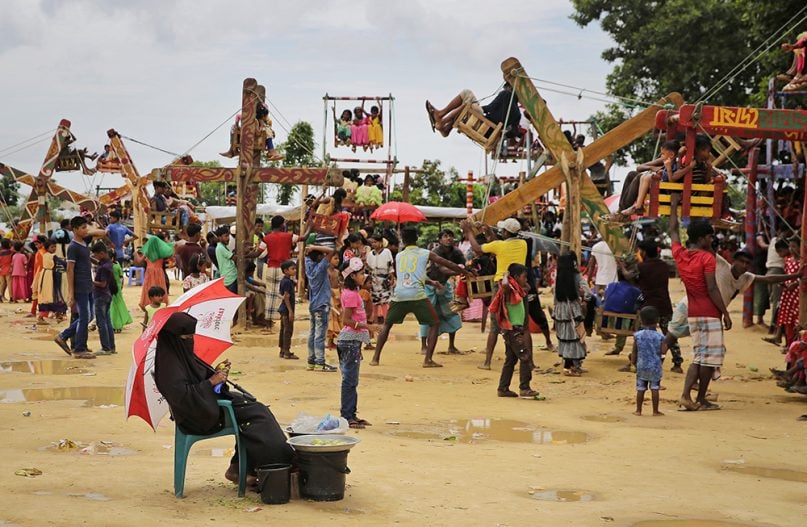 A Rohingya refugee sits under an umbrella as she sells fruit at a playground set up for Eid al-Adha in Kutupalong refugee camp in Bangladesh on Aug. 23, 2018. (AP Photo/Altaf Qadri)