SAMBURU, Kenya (RNS) — As she sat outside her hut making jewelry to sell to tourists, 9-year-old Sajon Lengupayi pleaded with passers-by to rescue her from an early marriage that she said her parents arranged without her consent.

“It pains me a lot,” said Sajon as she broke down in tears. “I want someone to help me move out of this marriage so that I can go back to school.”

Sajon’s husband “beaded” her when he was 20 and she was 7 years old. He placed traditional beads around her neck, declaring his possession of her, and gave her family a dowry of cattle, goats and sheep. 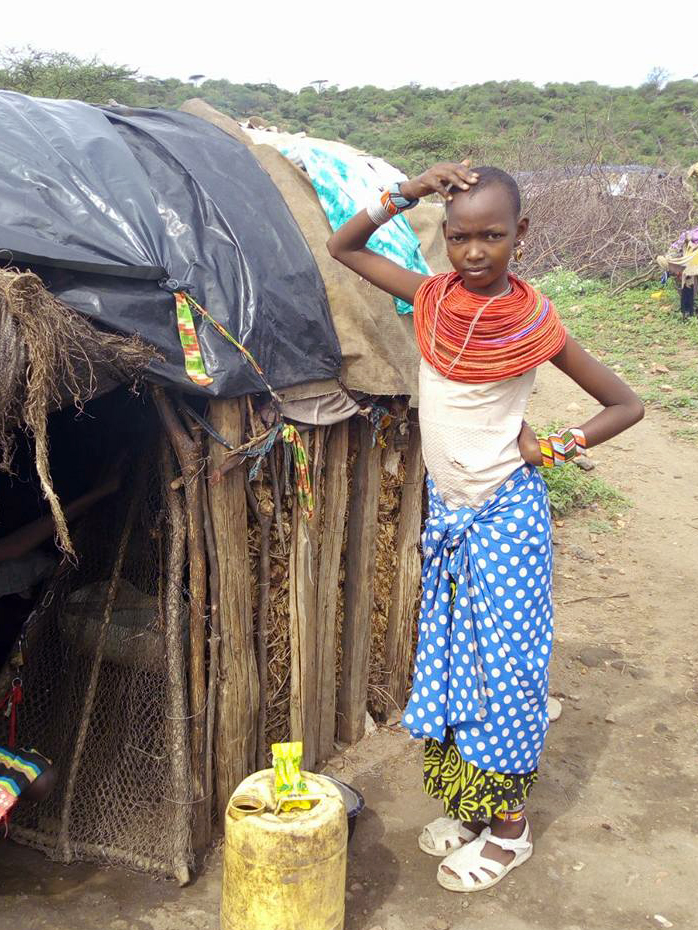 Sajon Lengupayi, 9, stands outside her hut in northern Kenya on July 15, 2018. She was beaded at the age of 7, but she now wants to be rescued from the marriage and go back to school. RNS photo by Tonny Onyulo

They were married against her will in early 2017.

Beading in the Samburu tribe of northern Kenya is a form of sexual enslavement in which girls as young as 6 can be claimed by older men. The ritual lets the men — often warriors — engage in sexual intercourse with young girls even when they do not intend to marry them. In some cases, the men and young girls are related.

“The culture prepares these young girls for marriage in the future,” said John Lengoros, an elder in the community. “But we do not allow these young girls to get pregnant. In case of pregnancy we advise them to abort because we consider the baby as an outcast, being born as a result of people of the same family sleeping together.”

The practice of beading “exposes young girls to physical, mental and sexual violence,” according to the Helsinki-based KIOS Foundation, which is working with a local group that assists girls who have been beaded.

In Sajon’s case, Lengoros said she was lucky. The man who placed red beads on her neck was from a different family. He then married her. Other young girls are often abandoned by the men who beaded them because they come from the same family.

Sajon is one among thousands of Samburu girls living in the dry heartland of northern Kenya around 350 miles from Nairobi. Many are at risk for beading.

A few miles from Lengupayi’s home, Agnes Lempeei, another victim of beading, said a close relative approached her parents in 2016 with red Samburu beads and placed the necklace around her neck.

A few months later, she was pregnant and aborted the baby by taking poisonous herbs. Access to health care and contraception is minimal in the region.

The warrior abandoned her and married a girl from a different family, she said.

“I felt very bad because my parents allowed it to happen,” said Agnes, now 13. “My mother built a hut for us where we used to sleep with the warrior. I was not allowed to go back to school, and later the (warrior) went ahead and got another lady, leaving me alone.”

Child beading is a major cultural practice found in the Samburu community. But religious leaders are battling to end the practice. 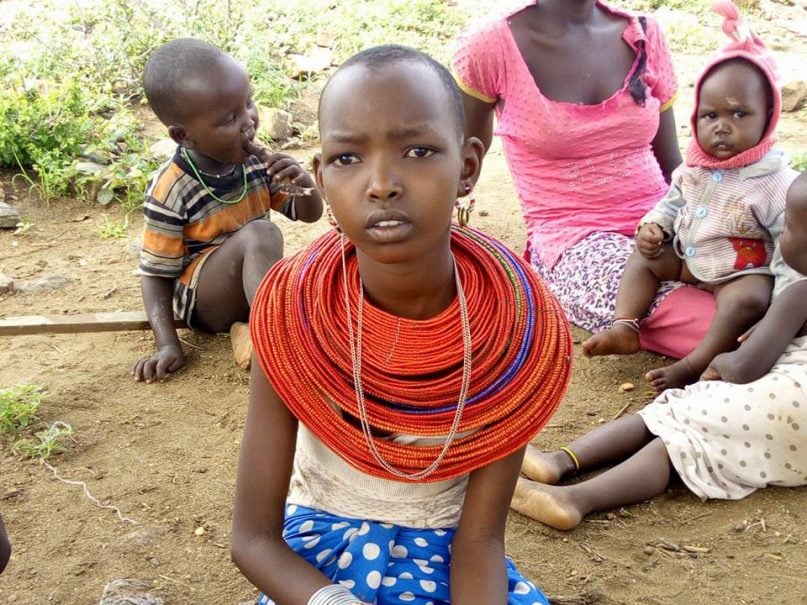 Sajon Lengupayi, 9, with her Samburu community in northern Kenya on July 15, 2018. RNS photo by Tonny Onyulo

Last month, the Rev. Francis Limo Riwa, a priest of the Diocese of Meru in northern Kenya, rescued a Samburu girl from an early marriage after he negotiated with elders to return the dowry the man had given the girl’s parents. The dowry was eight cows and $500.

The girl, Lilian Nabaru, was married in 2015 to a 50-year-old man. She was 12 years old and became his fourth wife. Though this older man allowed Nabaru to continue with her education, the girl had to spend the school holiday with her husband.

“I didn’t know the girl was married,” said the bearded priest, who has founded several schools in northern Kenya to help orphans and poor nomadic children access education. Riwa said he confronted the girl’s husband and demanded she be released.

Lilian’s husband finally agreed to set her free from marriage but demanded his cows and money back. Riwa said the girl would continue with her education. He called on elders to stop the practice of beading and to allow girls to go to school.

“I want to urge the government to sensitize the community on basic rights and elders to allow girls to access education,” said Riwa, who said he has rescued hundreds of other beaded girls in the region. “We’ll continue to save other girls against this brutal act that denies them basic rights.”

Local leaders contacted by Religion News Service had no comment about the plight of Samburu girls. But observers said the politicians in the region are afraid to go against the elders, fearing repercussions at the polls.

“They can’t do more about the issue. It’s our culture and they embrace it,” said Lengoros, the elder. He said local politicians also engaged in beading when they married.

“How can they fight the culture that gave them wives?”

Meanwhile, Sajon is waiting for help. She wants to go back to school and achieve her dream of becoming a teacher. To do that, someone will have to pay back dowry, said elders.

“I can’t help myself. I will be disobeying my parents,” she said. “But I want to go school and still be a small girl.”