SEOUL, South Korea (RNS) — The strong aroma of spices fills the air in the famous Korean restaurant Eid. Three Muslim sisters — Dina, Nana and Nurul Kamarul — sit enjoying bibimbap and kimchi, among other traditional Korean dishes. A round green sticker on the window tells visitors the restaurant is officially certified as halal.

Muslims who eat halal cannot consume any pork or alcohol. In South Korea, a country known for its soju and pork-belly barbecue, those two constraints alone can be more restrictive than they seem. The stickers are meant to help Muslim foreigners, like the Kamarul sisters, who were visiting from Singapore, find suitable food.

The stickers are part of a government-led initiative to attract more Muslim tourists to South Korea. The nation has hosted a Halal Food Festival, which recently ended; added more than 100 Muslim-friendly restaurants; and spent 200 million won — the equivalent of more than $175,000 — to provide prayer rooms at popular tourist destinations.

The Muslim tourism initiative comes after South Korea was hit with a sharp decline in Chinese visitors, who accounted for half of the country’s tourism revenue. When the U.S. deployed an anti-missile system to South Korea last year despite China’s disapproval, the Chinese government retaliated by banning tourism agencies from selling group travel packs to South Korea, slamming the tourism industry with a loss of about $6.8 billion in 2017. 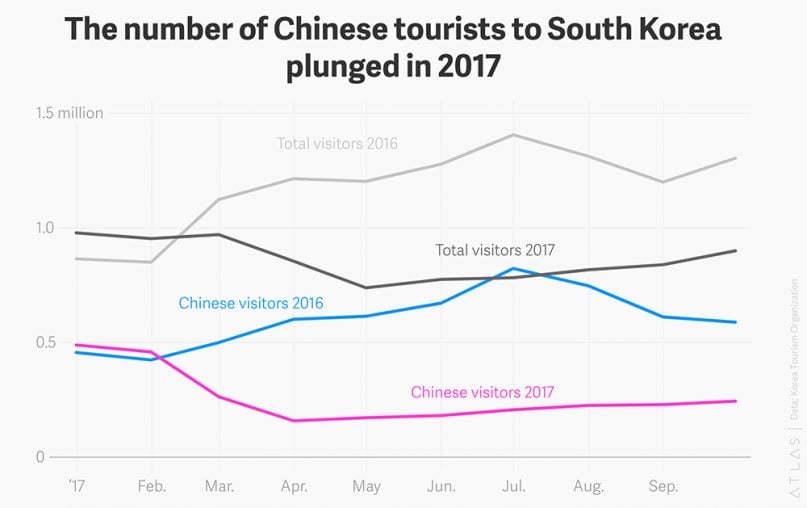 “The number of Chinese tourists to South Korea plunged in 2017.” Graphic courtesy of Atlas/EchoHuang

To fill that revenue gap, the government is making the country more accessible to Muslim tourists. However, some of the efforts have been met with misunderstandings and protests.

During the 2018 Pyeongchang Winter Olympic Games, the Korea Tourism Organization’s plans to offer mobile prayer rooms were thwarted by protests. Former President Park Geun-hye had previously attempted to build a halal slaughterhouse in South Korea to increase access to Islamic food, but it was also halted by protesters.

Song Bo Ra Ola, a teacher of Islam at Seoul Central Mosque, said Christian groups sometimes protest outside the mosque, and the mosque receives angry calls from people who are concerned about the growing number of Muslims in the country.

The protests stem from ignorance and fear, Ola said.

“The government hasn’t done anything in particular to help reduce the fear of the public. Education needs to come first — it’s a big thing,” she said. “It’s kind of hard to change people’s minds (when they’re adults), so we’re looking forward to teaching the next generation.”

In a predominantly Christian country, the Islamic population is only 0.2 percent, making hijabs and halal restaurants uncommon sightings.

However, the Kamarul sisters, who have been taking weeklong trips to South Korea for seven years, said they have not witnessed such protests. They said Koreans tend to be welcoming yet largely uninformed about Islam, prompting Koreans to ask insensitive questions.

“It’s common for them to stare,” said Dina Kamarul, pointing to her black hijab. “I don’t think they are malicious — they’re just ignorant in this religion, so we try to take it positively and explain whenever they ask.” 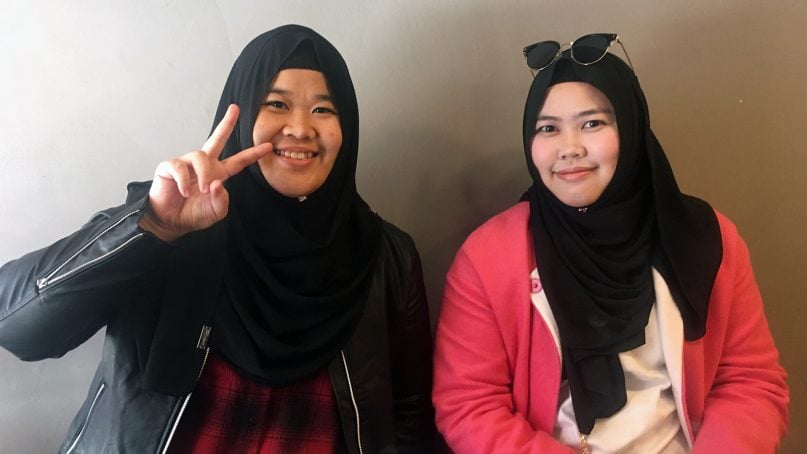 Dina, left, and Nana Kamarul eat in Eid, a halal-certified restaurant, while vacationing from Singapore in Itaewon, Seoul, in March 2018. RNS photo by Miranda Mazariegos

Although the Kamarul sisters simply avoid haram foods — those forbidden by Islam — Muslim travelers who follow strict halal guidelines will sometimes not even enter restaurants that are not halal-certified.

Eid is found in Itaewon, a neighborhood known for its bars, trendy restaurants and large foreign crowd. One of its streets, Usadan-ro 10-gil, is called “Muslim street” by the locals, because it’s swarming with immigrants predominantly from the Middle East. Their shops, markets and restaurants cater to the Islamic population.

Round stickers such as the one on Eid’s window are a common sight throughout Muslim street. They indicate restaurants are either officially certified as halal by the Korea Muslim Federation or self-certified when they’re owned and operated by Muslims. Purple “Muslim-friendly” stickers mean a restaurant has halal options, but the place itself might not be.

To help Muslim tourists navigate the country, many travel agencies have tailored their travel packs.

YallaKOREA was started by Khalid Park, a native Korean who, although Catholic himself, wanted to help his Arab friends navigate his home country. Though his clients often speak English, many Koreans do not, creating yet another barrier to finding food and prayer rooms in Seoul.

Park provides his customers a notecard they can show to waiters when ordering food. It delineates halal restrictions both in English and in Korean. However, he recalls a time when one of his clients was served pork despite having shown his notecard. 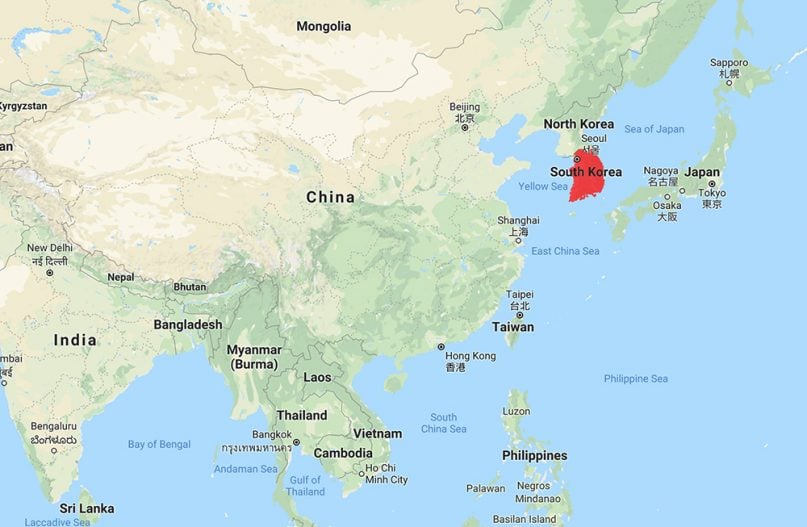 When he told the waiter he had ordered food without pork, the waiter brought out a spoon and scooped the meat off the customer’s plate, thinking that would be enough to make the food suitable.

“Korean people think that if someone doesn’t eat pork, they can just remove the pork from the plate, and they can eat it like that,” Park said. “But for Muslim people, the cooking itself has to be done without pork from the start for it to be halal.”

Park said many of his clients come to Korea excited to visit the natural parks and mountains, so he plans several trips outside Seoul. However, leaving the capital means leaving behind most of the Muslim-friendly restaurants.

“Sometimes we have to visit Itaewon to pick up some food before starting (the tour). We keep it in the car and then eat it at lunchtime,” Park said.

In addition to finding food, Muslim travel requires that tourists find adequate spaces to pray. Islam requires followers to pray five times a day, and although many practicing Muslims can pray anywhere that is quiet and clean, many strict practitioners require access to designated musallas, or prayer rooms.

Although Seoul has increased the number of prayer rooms, availability is limited to about 100 facilities, many of which are in hospitals and universities, not in tourist destinations.

Because of a lack of prayer rooms, she asks restaurant owners to let her clients pray after eating. Although many agree at first, she said, some rescind their offer after local customers voice concern.

Acknowledging that she had to do a lot of research before she started her job, Nina Park said the government should provide educational material in addition to the halal restaurants and prayer rooms.

“Before the government does anything more for Muslim tourism, they have to let Korean people learn how different that culture is, because people don’t understand it,” she said. 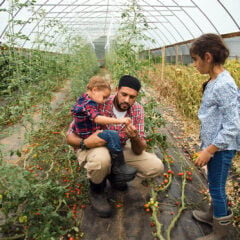