BALTIMORE (RNS) — There was a lot of talk but not a lot of action.

When American clerics at the U.S. Conference of Catholic Bishops began their annual fall gathering in Baltimore on Monday, they were eager to take bold, decisive steps to address what many see as the biggest issue facing the church in years: the resurgence of the child sex abuse crisis.

But when public sessions finally wound down Wednesday afternoon (Nov. 14), those hoping to tackle the issue came away largely empty-handed, their efforts stymied by a last-minute request from the Vatican to wait until after a global meeting on the subject in February to vote on prepared measures designed to hold bishops accountable if they protect abusers or commit abuse themselves.

“I opened the meeting expressing some disappointment. I end it with hope,” said USCCB president Cardinal Daniel DiNardo of Galveston-Houston, although it wasn’t clear whether all of his fellow bishops felt the same.

Reports have since emerged from Italian newspapers that Vatican officials felt they were not given enough time to review the pending USCCB resolutions and quibbled with some of the language. But bishops in Baltimore noted another possible reason for the pushback: an emerging tension between American and international bishops, with U.S.-based clerics desperate to address the abuse crisis and a global church wary about the implications of their actions.

"This is not completely the reason it's happening, but it's part of why this is happening," said Christopher J. Coyne, bishop of Burlington, Vt. 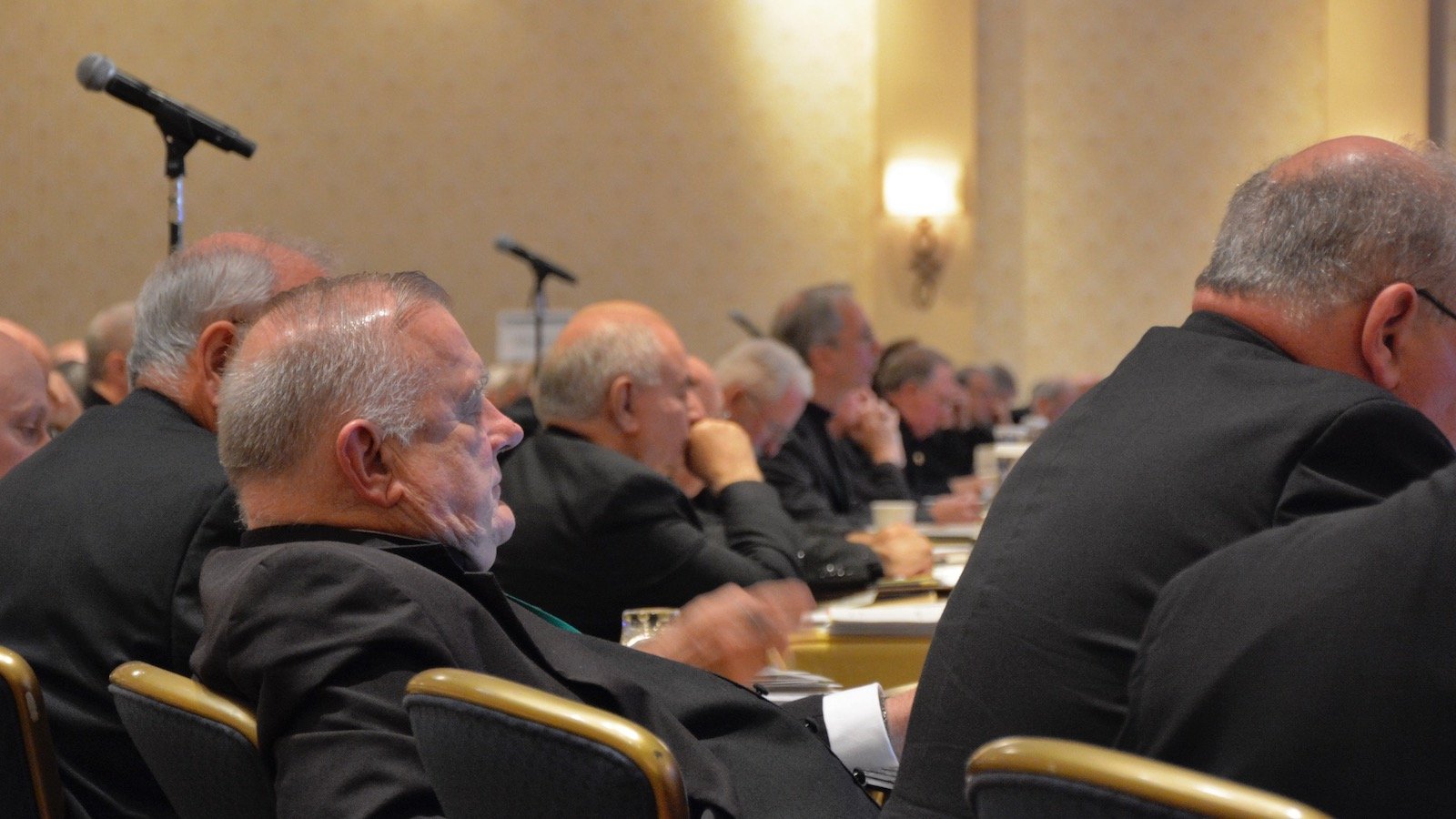 Bishops sit at the U.S. Conference of Catholic Bishops meeting in Baltimore on Nov. 13, 2018. RNS photo by Jack Jenkins

Over the course of the three-day meeting, bishop after bishop gave voice to the anger, frustration and confusion they have heard from Catholics since the Pennsylvania attorney general unveiled a report documenting decades of alleged abuse by the church, and especially since revelations concerning Washington Cardinal Theodore McCarrick’s alleged history of abuse emerged earlier this year.

“Some of my pastors have been taken aback by the rage they’ve faced” about the abuse crisis, said Cardinal Joseph Tobin of Newark, N.J., who stressed that clerics should “keep victims central.”

Tobin and others were hoping the USCCB's leadership in answering this anger would set an example for the rest of the church, as it had largely done in 2002 in the aftermath of the Boston Globe’s famous Spotlight report. Bishop Robert Deeley of the Diocese of Portland, Maine, pointed to the “Charter for the Protection of Children and Young People,” a landmark series of church reforms about sex abuse crafted in that year.

“It is, in fact, the American church which brought about those kinds of changes which make it possible for the rest of (the world),” said Deeley, who was working at the Vatican’s Congregation for the Doctrine of the Faith when American bishops petitioned Vatican officials to approve the charter.

“There’s a history of the American church setting a pattern,” said Deeley.

Bishop Andrew Cozzens, an auxiliary bishop of St. Paul and Minneapolis, suggested American bishops have a responsibility to model a response for the rest of the church.

“I think, as Christians, we’re always trying to look for how is God going to bring good out of evil,” he said. “And I think one of the goods that can come out of the evil that we’ve experienced in the United States can be that we can help people in other parts of the world where the culture of transparency and accountability that we understand is not at all present — that culturally is just not there.”

But offering models for the world’s more than a billion Catholics is a tricky thing. Bishops pointed out that Catholic communities in some countries have difficult or even actively hostile relationships with governments and law enforcement, which makes reporting abuse allegations a difficult task.

“It’s also political within the various regions and countries in which the church finds itself,” said Coyne, chairman of the USCCB's Committee on Communication. “It’s one thing for the United States to say that we will report all allegations to the particular authorities in the country. But if you’re a Catholic community in a church where you’re under fire, under another group that does not like the Catholic Church at all, is someone who has an allegation made against them going to get justice?” Politics within the church were also a concern. Tobin noted that even during the immediate aftermath of the 2002 Spotlight report, the American bishops, concerned about how far they could push reforms before the Vatican pushed back, failed to include specific provisions to hold themselves accountable for mishandling of sex abuse. It was that failure that this year’s measures were supposed to address.

But now the credibility of American bishops, Tobin said, was on the line here in Baltimore, suggesting that it had never truly recovered from the Spotlight era. On Tuesday, he declared to the assembly, “If the events of the summer … can do such devastating damage to our moral credibility … what was our credibility built on that it can be so sucked away?”

He was echoed by Bishop Robert Christian, auxiliary bishop for the archdiocese of San Francisco, who called the vote delay “frustrating” during a session Wednesday, saying, “Much as we do respect the Holy See, we also know how long it takes the Holy See to get things done.”

With their open expressions of disappointment at the Vatican's stay, and their repeated calls for action, the American prelates appear to be headed for a collision course come February.

“I think, whether it was intended or not, this whole gambit has raised the expectation for the February meeting,” Tobin said. “So if the February meeting doesn’t produce, or at least doesn’t open some doors for Americans to do what we have to do, that’s gonna be really …trouble.”