The series of arson attacks, which investigators believe are related, began in March when fire was set to Kingdom Halls in Olympia and the close-in suburb of Tumwater on the same day. Four months later the Olympia Kingdom Hall was set ablaze again, destroying the building this time.

In August, a Kingdom Hall in Yelm, about a half-hour drive from Olympia, was burned. Earlier this year that same building was peppered with nearly three dozen rifle rounds, causing $10,000 damage.

Jason Chudy, public information officer for the Seattle office of the federal Bureau of Alcohol, Tobacco, Firearms and Explosives, said no one has been charged in the crimes, though surveillance video has captured footage of a suspect.

“At this point, until we’re able talk to a suspect to determine what the motivation was, it’s hard to determine if these are hate crimes,” said Chudy.

There are approximately 33,000 Jehovah’s Witnesses in Washington state and 163 Kingdom Halls, the denomination’s name for its worship centers. A March 2018 fire at a Kingdom Hall in Olympia, Wash. Photo courtesy of Olympia Fire Department

Though saddened, local Witnesses say they’re grateful no one has been hurt and agree that buildings can be replaced. All of the attacks have occurred before dawn.

Bill Warner of the West Lacey Congregation of Jehovah’s Witnesses said that since the attacks began, congregations have stepped up security, particularly when buildings are occupied. Doors remain locked and guests are being screened via video.

“Obviously, we try to do all we can to protect the safety of our members while we meet together to worship,” he said. “As far as providing security while the building is unoccupied or during the night, we do have surveillance cameras but we will not jeopardize the lives or safety of our brothers by providing 24-hour security simply to save a building.”

Last year the Supreme Court in Russia declared Jehovah’s Witnesses an extremist group, a move that was condemned by the nonprofit Human Rights Watch.

“The Jehovah’s Witnesses are simply peacefully exercising their right to freedom of religion,” Rachel Denber, deputy Europe and Central Asia director at Human Rights Watch, said in an August statement. “The Jehovah’s Witness faith is not an extremist organization, and authorities should stop this religious persecution of its worshipers now.”

“The freedom to worship is a right that should be protected for every person in our country,” he wrote.

In a statement to Religion News Service, the governor added, “As a society we should not let any forms of discrimination or hatred stand.”

Thurston County Sheriff John Snaza couldn’t be reached for comment, but earlier he told KOMO-TV that he couldn’t wrap his mind around the attacks.

In a news conference over the weekend, Snaza said the Sheriff’s Department and ATF are working together to solve the serial arsonist case, and he called on the community for help. Authorities are offering up to $36,000 in rewards for information leading to an arrest and conviction. 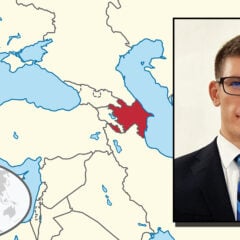