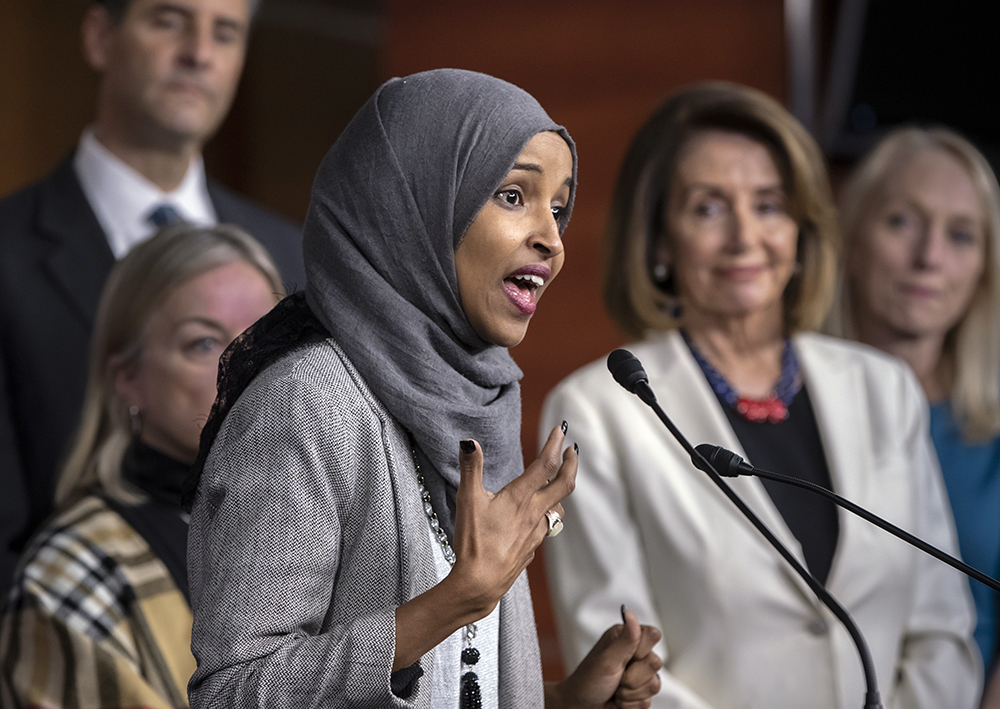 Rep.-elect Ilhan Omar, with House Democratic leader Nancy Pelosi of California, right, speaks about the party's legislative priorities when Democrats assume the majority in the 116th Congress in January, during a news conference at the Capitol in Washington, on Nov. 30, 2018. (AP Photo/J. Scott Applewhite)
March 7, 2019
Jeffrey Salkin

(RNS) — This week, I have been sitting shiva for my father, George Salkin.

Several people approached me and asked: "Was your father 'religious'?"

No — certainly not in any ritual sense.

My father's Judaism was all about memory — historical memory.

Back in the late 1960s and early 1970s, when I marched against the Viet Nam war, my father would caution me. True — he was also anti-war, even as much as he disliked the aesthetics of the movement.

But, on several occasions, he would say to me: "Be careful. Your radical friends might turn against Israel, and against the Jews."

I laughed him off.

You are right, because, well, Rep. Ilhan Omar.

Several weeks ago, Rep. Omar criticized Israel and AIPAC. She said that the American Israel Public Affairs Committee has paid politicians to be pro-Israel.

“It’s all about the Benjamins baby,” she tweeted. As in hundred dollar bills.

Omar accused the Jews of buying support for Israel — and worse, of controlling Congress with their money.

It wasn't the first time that she expressed her concerns about Israel in problematic tones. In 2012, she commented that “Israel has hypnotized the world.”

Now, most recently, she has said that pro-Israel activists were pushing “for allegiance to a foreign country” — a reprise of the ancient antisemitic trope of “dual loyalty.”

My father, of blessed memory, had a simple and even simplistic world view.

"Fool me once," he would say, "shame on you. Fool me twice — shame on me." Rep. Omar has apologized for her earlier remarks. But, she keeps making them. Apology not accepted.

You would say to my father: "There has been far too much attention to Rep. Omar's statements. It is coming off as racist and Islamophobic."

My father would have responded: "Hatred is hatred, and it doesn't matter who says it."

You would say to my father: "Well, what about all the Islamophobia that has targeted her?"

My father would have responded: "That anti-Muslim stuff is a pile of crap. Two wrongs don't make a right."

My father would have understood that you have to criticize Omar's antisemitic themes, and you have to simultaneously criticize the anti-Muslim themes that have come to the fore.

You would say to my father: "Well, you see, implying that Jews have dual loyalty isn't really antisemitic. You have to understand the perspective, and the context, and the nuances, and maybe there is some truth in it anyway. After all, AIPAC..."

There are many things that my father understood very well.

But, there are several things my father would never have understood

And, please -- this has nothing to do with criticizing Israel, or its policies.

In fact, it could mean that you are Jewish. There are many aspects of contemporary Israeli life and policy -- the lived reality of the Jewish state -- that make me uncomfortable, and even crazy.

Yes, you are probably anti-Israel. At the very least, you are trafficking in antisemitic ideas and themes.

Have the decency, the moral elegance, and frankly, the good taste not to tell the Jews what is or isn't antisemitic.

As with others who suffer from dementia, towards the end, my father's short term memory was shot.

But, his long-term memory -- a memory that stretched back into history, even long before he was born -- was intact.

Those who defend Rep. Omar are like a ten-year-old Macbook.