(RNS) — In the 2016 presidential election, exit polling tells us, about 8 out of 10 white evangelicals who voted pulled the lever for Donald Trump. This information came as a disappointment to many and, to some, as further indication of the moral hypocrisy of white evangelicals.

Those who promote “family values,” espouse equality for all people and stand for biblical ethics chose to embrace a man whose words and actions often place him as the antithesis of all that evangelicalism supposedly represents.

The enthusiasm of white evangelical voters did not dissipate after the election, either. Throughout an administration rife with scams, grift and bigotry, this voting bloc has remained the most loyal to the president. But Trump’s white evangelical base shows signs of weakening.

A recently released report from the Pew Research Center shows that white evangelical support for the president has slipped but it remains strong.

In February 2017, just after Trump took office, white evangelicals approved of how he handled the job of president at a rate of 78 percent. Two years later, according to Pew, that number has dipped to 69 percent. 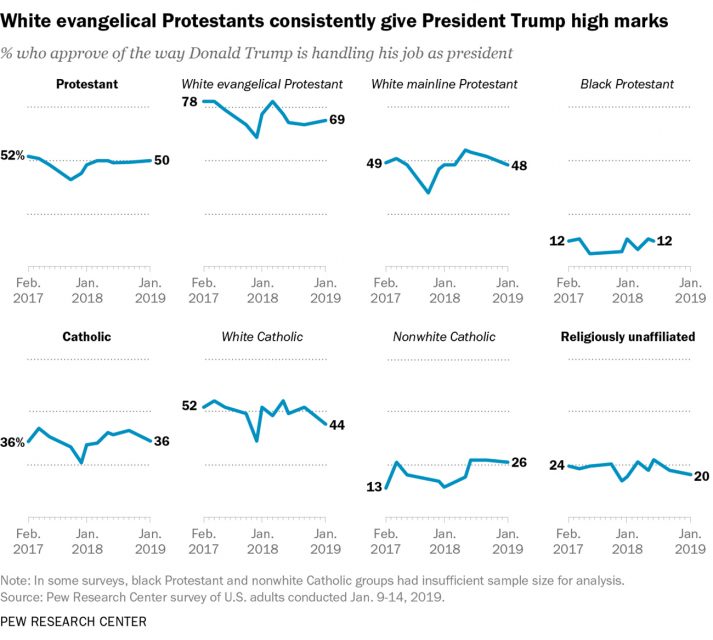 That 9 percentage point decline is the largest drop among the groups polled, but white evangelicals have also consistently approved the president at the highest levels, so they had further to fall. The closest groups to white evangelicals in their support for Trump are white mainline Protestants (48 percent) and white Catholics (44 percent).

The groups that least approve of the president’s job performance are black Protestants and the religiously unaffiliated. For black Protestants, their rating has held steady at 12 percent approval from January 2017 to January 2019. The religiously unaffiliated logged a 20 percent approval rating. Non-white Catholics registered at 26 percent — a 13 percentage point increase in the last two years.

Of course, many white evangelicals have their reservations about Trump. As the Pew report states, leaders such as Rick Warren expressed “ambivalence” about supporting this president, and others such as Beth Moore “openly oppose” him.

A common rebuttal to statistics about Trump’s overwhelming support from white evangelicals is that these are what may be called EINOs (Evangelicals in Name Only). The white evangelicals who support Trump, so the tale goes, don’t take their faith seriously. They hardly attend church, read the Bible or exhibit other conspicuous displays of religiosity.

According to the numbers, more frequent church attendance does not translate into less support for Trump. While the Pew report does not speculate on why white evangelicals have a lower approval rating for the president, a few factors may offer some context. Even though it’s hard to keep up with all the news emanating from the Oval Office and Trump’s Twitter feed, a number of actions the president has taken have proved unpopular with voters. The stoking of fears of an immigrant “invasion” at the U.S. border with Mexico (especially leading up to the November 2018 midterms), the increasing slew of indictments of people connected to the Trump administration, and a scathing testimony on national television by Trump’s former personal lawyer, Michael Cohen, may all be leading white evangelicals to lower their approval rating of the president.

Internal pressure, however, should not be overlooked. Christians, both white and black, have decried the president’s rhetoric and actions for years. Copious conferences, panels and articles have been produced to remind evangelicals of their “first love” (Revelation 2:4).

In addition, an increasing awareness of how Christianity compels action for the common good may be a factor. A document called “The Statement on Social Justice and the Gospel” proved contentious among white evangelicals who see justice efforts in the public sphere as a distraction from the “true” gospel and those who see such actions as a demonstration of it.

In the political realm, some white evangelicals may be growing in their awareness and conviction that how they vote sends a message to a watching, and often non-Christian, world.

Yet overall, white evangelicals approve of Trump’s job performance at higher rates than any other religious group surveyed. Amid all the debates about who is a “real” evangelical and what that term actually means, these data present an opportunity for churches to probe the way they teach their members to think about political participation in a representative democracy. Such discussions are crucial for any group that purports to offer “good news.”