(RNS) — Just across the U.S. border in South Texas, a few steps into Mexico, a young couple from Nicaragua holds their 2-year-old son, who is, and will forever be, unable to make a sound from his mouth. He was recently shot in the neck while inside his home, another victim of the pervasive violence in his home country.

His parents left their other children with family to bring him here, to our country, in search of refuge and a chance to give him a new kind of life — one worthy of his human potential.

That’s where their tragic Nicaraguan story ends, and their tragic American story begins. They live outside now, 24 hours a day, seven days week, as they inhabit a newly formed ad hoc tent town for  people waiting for legal entry into the United States. Today is their 67th day in the camp, wearing the same clothes, using sanitary wipes to wash and walking in the same shoes worn throughout the long journey. 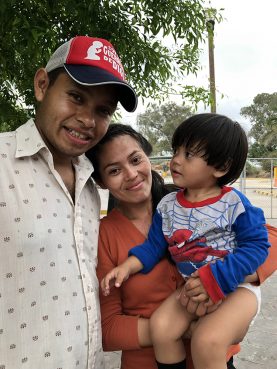 The Gonzalez family, from Nicaragua, waits south of the U.S. border while seeking asylum. Their son was shot in the neck during violence in Nicaragua. Photo courtesy of Aaron Alexander

We know this because we spoke with them just a couple of days ago — looked into their eyes, felt their fears, embraced their dirt-stained and weary figures.

Our simplest pleasures — warm food, a shower, clean clothes — are for others the stuff of a royal moment. Rabbis in Washington, D.C., we live in the talk capital of the world; we constantly hear the stats, the stories, the fears and the injustices. But it is something else entirely to stand in proximity to this particular, man-made brand of human suffering.

You may wonder why two D.C. rabbis, with seven of their congregants, chose to board a plane for the Rio Grande Valley and walk into Mexico to serve those awaiting entry into our borders.

Quite simply: It is precisely because we are leaders driven by faith, and God, that we see ourselves as obligated to interact directly with the stories of desperate humans seeking refuge, just as the Jewish people did less than 70 years ago, here in America, and throughout most of our history across the world.

“For the majority of Americans, most of what happens on the border continues to remain out sight and out of mind,” writes Francisco Cantú in “The Line Becomes a River.”

So we traveled to McAllen and Brownsville, Texas, to force on ourselves, upon our hearts, a vision of the border that would cut through the endless debates that distract from basic human dignity.

It was in Brownsville, home of Texas Southmost College (aptly named) and an official U.S. port of entry, that we met the young family from Nicaragua, alongside a few dozen others also living outside a few feet from the walking bridge to America.

Not so long ago these refugees and asylum-seekers would present themselves at our borders and declare their intent for asylum, and then enter what was already a dysfunctional system, a veritable web of “we don’t really want you here” communicated through policy and procedure.

But even that degree of welcome has recently changed.

At the midway point of the walking bridge stand two Border Patrol agents. They stop each person who presents, letting through only those who already possess papers. Others, primarily would-be asylum-seekers, are sent back to Mexico. For those who don’t make it across, the next trial in their journey immediately begins, because in order to declare asylum at the border one must be chosen by Mexican Border authorities to enter. 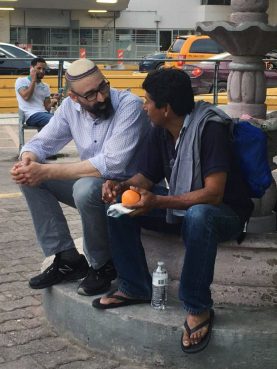 Rabbi Aaron Alexander visits with a man while visiting asylym-seekers on the U.S.-Mexico border near Brownsville, Texas. Photo courtesy of Aaron Alexander

So they wait. Outside. 24 hours a day.  If they leave they may not hear their name called and could lose their chance to cross the bridge. Which means, essentially, our government is knowingly creating the need for people to live in further degradation, doubly homeless.

As we walked back over the bridge from Mexico to Brownsville, we had a nearly palpable feeling of an unearned privilege, an accident of birth, and a deepened awareness of the uniquely special promise of what this country holds for those who seek to dwell in its borders.

In a two-hour meeting with young lawyers from the McAllen office of the Texas Civil Rights Project, we were provided with facts that mirrored what we had observed: Child separation continues, even after a presidential executive order purportedly stopped it.

Ports of entry are arbitrarily closed for days, increasing illegal border crossings. Expedited removal is becoming normalized. Border Patrol agents can now turn over for deportation those crossing into our country, without their going before a judge, without any due process.

There’s a widespread system of criminalization, commodification and dehumanization that pervades every corner of our immigration and border apparatus. It’s been this way for a long time, but in the last two years the worst parts of it have been exacerbated.

We aren’t immigration experts, nor are we naive. We know all doors can’t remain endlessly open. We understand why borders matter. But the act of adding more and more locks to an already locked door is to quite simply deny humans the chance to feel their humanity.

The Talmud teaches: “Pity the one with no courtyard but who still builds a fence.”

In other words, extra barriers with a dearth of internally consistent values are morally specious. And they inevitably lead — intentionally or not — to more violence, and more human suffering.

Our obligation is to make this American problem less distant. Please, head to the border. Most of us are separated only by an airplane flight.

Your witness matters. Your presence matters.

(Rabbis Lauren Holtzblatt and Aaron Alexander lead Adas Israel Congregation, a Conservative movement synagogue in Washington, D.C. The views expressed in this commentary do not necessarily represent those of Religion News Service.)