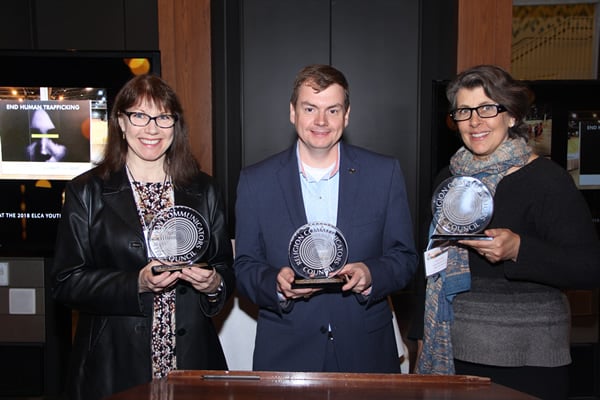 CHICAGO — In 2019 the Religion Communicators Council (RCC) presented more than 90 total winners of the DeRose-Hinkhouse Memorial Awards recognizing quality and achievement in about 60 categories of communication and public relations on Wednesday, April 10 at the annual convention.

Active RCC members, who demonstrate excellence in religious communications and public relations, compete for the honors every year. These peer awards are named in honor of the late Victor DeRose and the late Paul M. Hinkhouse who were leading lithographers in New York City and longtime supporters of RCC. A strong interest in and a concern for excellence in communication were shared by the friends and business partners.

This year’s judges included professionals from educational institutions, religious organizations, and private advertising and marketing teams. News, feature, promotional and other materials in all forms of media – print, electronic and digital – with either local, regional or national reach, were recognized.

RCC received more than 200 entries in the competition this year. Each entry was judged on overall quality, including concept, writing, design, creativity, style, use of color, appropriateness of material for intended audience, creative use of resources, and effectiveness in achieving its purpose. Three award categories are given: Awards of Excellence, Awards of Merit, and in each of the nine classes, a Best of Class.

The 2019 DeRose-Hinkhouse Award Best of Class winners are:

The complete lists of award winners are published on the Religion Communicators Council DeRose-Hinkhouse Awards page.

The Religion Communicators Council, founded in 1929, is a professional association whose mission is to provide opportunities for networking and professional development for people working in communications for a wide variety of faith-based organizations. RCC recognizes and cultivates excellence in communications of religious faith and values, as well as advances the public’s religious literacy.