(RNS) – For most Muslims, Ramadan is a month filled with community and fellowship: waking up together to eat before dawn, sharing communal iftar meals to break the fast in the evening, praying together in the mosque long into the night.

But for others, the holiest month of the Islamic calendar is also the loneliest.

Whether they’re recent converts, new immigrants, LGBTQ Muslims, married to a non-Muslim, living in a rural or isolated area, living alone or simply living in a new area without a Muslim network, many Muslims may not have a mosque or Muslim community to bond with.

Instead, they turn to social media to help bridge the distance between friends, family and religious leaders. 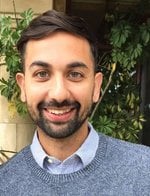 “I really want to connect to the Muslim community physically, but I need social media to help me do that, to help me see lectures from scholars and find out about community iftars,” said Omar Aziz, an Afghan American community organizer studying higher education at George Mason University.  “We have to rely a lot on these digital spaces because we’re not always connected and we might be far away from communities and family and places that we find that sense of belonging.”

Social media and technology are critical to helping fill that gap, Omar said.

“Connecting through social media is a really big part of building community and having friendships,” Aziz said. “Because we don’t always have a lot of spaces to do that ourselves.”

Five years ago, writer Shannon Abulnasr created the Ramadan Iftar Project, a Facebook group with more than 2,100 members, to help Muslim converts connect with community online. Group members in the same time zone connect via video chat to break their fasts together and share photos of their iftar. 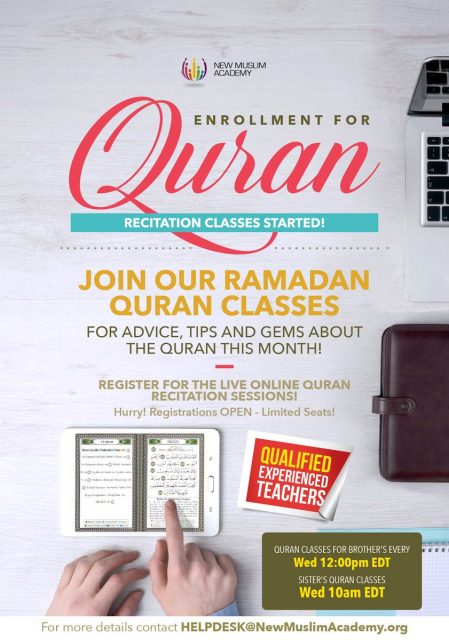 Since then, other digital initiatives have launched to help guide and connect new Muslims. The New Muslim Academy offers online videos, courses and books to help converts engage in the rituals of Ramadan.

Through podcasts and online videos, Muslims of all stripes can be transported to the campus of New York University, where the popular Imam Khalid Latif offers a sermon on becoming one’s best self during Ramadan.

They can take classes from renowned scholars on understanding the Quran and find advice on how to get back on track with their goal of finishing the Quran this Ramadan. They can hear sermons from the Women’s Mosque of America, or from their hometown mosque, or from the mosque that their family across the world attends every night. They can tune in to livestreams of the intense taraweeh prayers held at mosques across the country during Ramadan.

Muslims breaking their fast alone in their living rooms can also watch Muslim YouTube stars turn their own iftars into mukbangs, a popular genre of videos in which hosts broadcast themselves eating food while chatting with their audience. They can laugh with blogger Dina Torkia’s daily Ramadan videos, now an annual tradition online, showing her and her husband wrangling their two young children while fasting.

When Muslims feel ostracized from traditional mosques or have no biological family to spend time with during Ramadan, getting a positive Instagram comment on a photo of last night’s iftar can be life-changing.

Keeping that community connection alive is challenging during Ramadan, when many Muslims take a step back from social media during Ramadan to avoid distractions from worship.

Bilal Askaryar, who works for Church World Service in Washington, D.C., had been informally fasting from social media during Ramadan since he made his first online account.

But since he began leaning into his identity as a gay Muslim a few years ago, that changed.

Even in Washington, finding spaces that are affirming of queer Muslims is not easy, he said. While many mosques are welcoming, a few “unfortunate incidents” he and other queer friends have faced make entering a new mosque stressful.

“That’s why I still actively look out for those spaces online where I can interact with like my queer Muslim siblings and see how they’re observing Ramadan and making a digital place for themselves,” he said. “So often, we’re left out. The visibility itself is revolutionary.”

Askaryar, 33, may not be able to travel to Chicago to pray and break his fast alongside queer Muslims at Chicago’s Masjid al-Rabia.

But simply knowing that there are some people who are praying – and, sometimes, being able to watch them do so on Instagram Live – makes him feel less alone, he said.

Recently, I found the hashtag #MyDisabledRamadan and felt instantly at home with other disabled muslims♡I decided to write a blog post about my own experience as a disabled muslimah and the struggle of being unable to fast and the guilt that comes with it https://t.co/gw1wF5vzVk

This has included a community iftar at the mosque in Chicago this week that was broadcast online. The mosque’s programs – Friday prayers, Quran study circles and livestreamed “digital hangouts” around iftar time — are also online.

The conversation around #MyDisabledRamadan mirrors that the dialogue created by #BlackMuslimRamadan, launched on Twitter by anthropologist Donna Auston in 2015. Auston was looking for ways that underrepresented Muslims could share their experience with others across the world through photos, poems, recipes and reflections.

“In a world where blackness is very often attacked as the very antithesis of all that is beautiful, this newly formed digital community affirmed and uplifted an unapologetically black aesthetic as its own yardstick,” Auston wrote for Religion News Service soon after launching the conversation.

Black Muslims have also created a virtual space for themselves with Sapelo Square, a blog that seeks to be “a gathering space that builds on the long tradition of Islam in Black America and reflects the vitality of Black Muslim Life.”

Every Ramadan since 2016, they have invited contributors to offer reflections on passages of the Quran through a black Muslim lens. One emotional reflection compares the plight of Moses’ mother, as recounted in the Quran’s 20th chapter, to the way that enslaved black women’s children were taken from them and “sold down the (Mississippi) river”; another finds hope for those behind bars in the Quranic story of the prophet Joseph.

These online conversations have helped lead to in-person connections, too. Last year, Chicago-based organizer Samira Abderahman launched Black Iftar, a series of potluck iftar events aimed at gathering “black Muslims and their friends” in nine cities around the country.

“I knew a lot of Muslims who were black … belonging to various different communities who I know didn’t necessarily know each other or didn’t spend time with each other,” Abderahman explained last week on the Identity Politics Podcast, which features stories about race, gender and Muslim American life. “The intention of it was literally just to get a lot of these people … putting them all in a room with the intention of breaking our fast together and building community.”