(RNS) — Quebec’s provincial assembly will vote Friday (June 14) on Bill 21, a controversial measure that would ban public-sector workers in positions of authority from wearing any sort of religious symbolism while at their job. If passed, the law would bar Muslim women who wear the hijab, Sikhs wearing turbans and Jewish men wearing kippas, among others, from being able to work as teachers, police officers and judges. Christians would also have to remove their crosses.

More drastically, however, Bill 21 would also prohibit anyone from wearing religious symbols while receiving services from government bodies, including transit, doctors and dentists, school boards or subsidized day cares. If it passes, women wearing religious covering — including the niqab — would not be able to use a bus without revealing their faces.

The governing Coalition Avenir Quebec hopes to pass the law before heading on summer break.

An overview of Bill 21

The measure, which CAQ promised to pass in last fall’s electoral campaign, aims to protect the secularity of the province. According to the text of the law, it also “attaches importance to the equality of women and men.”

The proposed bill immediately drew criticism from Canadian Prime Minister Justin Trudeau, who called it “unthinkable” that “in a free society we would legitimize discrimination against citizens based on their religion,” while legal scholars maintain that the bill clearly violates Canada’s Charter of Rights and Freedoms. 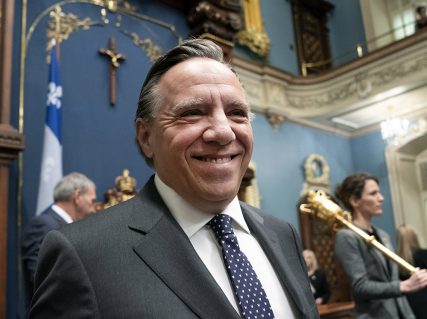 Quebec Premier François Legault on March 28, 2019, as his government voted on Bill 21. The crucifix behind him would likely disappear if the legislation is passed. (The Canadian Press/Jacques Boissinot)

The U.N. has also weighed in on the legislation, warning that the bill could lead to the violation of rights, including rights to health or education.

Quebec Premier François Legault insists that the bill is not discriminatory and that what voters want is to settle the issue of religious symbols in the public sphere once and for all.

What impact will it have?

Groups representing religious minorities are largely unsupportive of the bill and say it is discriminatory.

“What it does is disadvantage the women who want to practice their faith from participating in the labor market,” said Nuzhat Jafri, who is executive director of the Canadian Council of Muslim Women.

“We’re not talking about large numbers of people foisting their religion on anyone,” Jafri said. “Women are practicing their faith and at the same time they want to be full participants in Quebec society.”

During public hearings on the bill in May, Amrit Kaur, the World Sikh Organization’s vice president for Quebec, said the bill was “offensive to neutrality or secularism in the public sector and does nothing to advance the cause of gender equality.” According to the WSO, passing the bill would set a dangerous precedent that would undermine the rights of women and minority religious groups in the province.

But those in support of the bill insist such measures are necessary to preserve Quebec’s religious neutrality.

“For us, democracy is inseparable from secularism,” said Diane Guilbault, president of Pour les droits des Femmes (For the Rights of Women).

“We are not asking for the end of religions. We are asking for the state to disassociate itself completely from them in its relations with citizens,” she said, pointing to how people use religious pretexts to deny rights to women.

“The majority of Quebecers — of all backgrounds — support a secular state,” she said.

CAQ’s bill is the fourth attempt in the legislature to ban religious symbols in the public sector. In 2010, Premier Jean Charest presented a bill requiring individuals to show their face when receiving government services. In 2013, Premier Pauline Marois, with the nationalist Parti Quebecois, tried to pass the Charter of Values, which would have affirmed “state secularism and religious neutrality” while also ensuring the equality of men and women.

Like Bill 21, the charter would have banned all public workers, including teachers and those working in the health professions, from wearing conspicuous religious symbols, though smaller pieces of jewelry with religious markings would be permitted.

The controversial bill never passed, as Marois lost an April 2014 election she had called to gain an outright majority. Her loss was attributed in part to deep-seated opposition to the charter.

The Liberal government that replaced Marois’, however, passed its own religious neutrality bill in October 2017, which banned all public workers and those receiving government services from covering their faces. That law is undergoing legal challenges.

CAQ came to power promising to take action on the issue, emphasizing that people were growing tired of the debate.

There are differences between the bills, said Daniel Béland, the director of the McGill Institute for the Study of Canada.

“CAQ is going farther than the Liberals,” he said. “The Liberals supported a much more restrictive approach to secularism, while CAQ is closer to the Parti Quebecois in some areas. In the case of the CAQ, it’s a blanket approach, and it’s easier to implement.”

How could this happen in Canada?

Canada, unlike the U.S., does not have a bill of rights explicitly endorsing freedom of religion.

The Charter of Rights and Freedoms, which has existed since 1982, guarantees a number of freedoms, including the freedom of religion and the freedom of assembly. However, it also includes a “notwithstanding clause” that allows provinces to override the charter for five years.

Canada is “a very decentralized country, far more than the U.S.,” Béland said. “What the notwithstanding clause does is it allows the parliament, or a provincial legislature, to temporarily override certain aspects of the charter, so it’s something you can do for a limited time and then renew it.”

CAQ has included a notwithstanding clause in the bill, which legal experts warn will invite a flurry of legal action.

“It’s a controversial move,” Béland said. “It’s the first time that Quebec has used the clause since 1988, when they used it for the Charter of the French Language, to defend legislation to force immigrants in Quebec to go to French schools.” 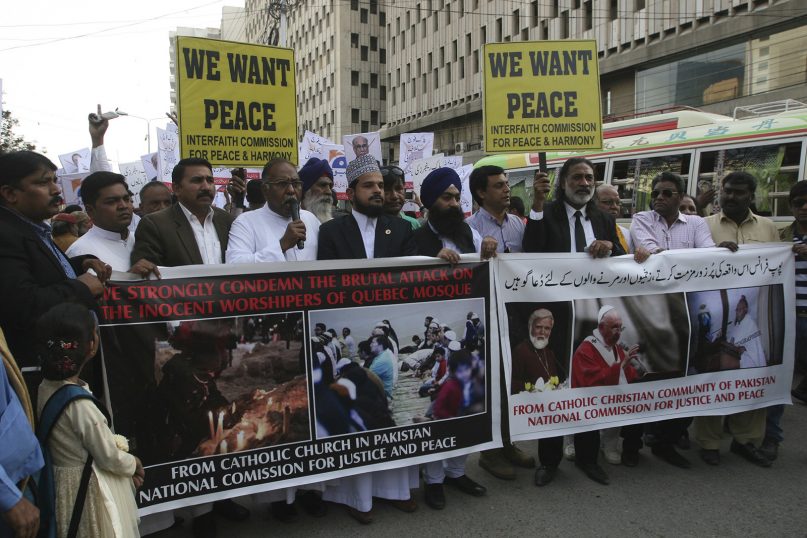 People protest in Karachi, Pakistan, on Feb. 2, 2017, against an attack days earlier on the Quebec Islamic Culture Centre in Canada that killed six Muslim men during evening prayers. Canadian Prime Minister Justin Trudeau and Quebec’s premier at the time, Philippe Couillard, both characterized the attack as a terrorist act. (AP Photo/Fareed Khan)

This latest version of a religious neutrality law comes as incidents against religious minorities, and particularly Muslims, have been rising.

Most notably, in January 2017, six Muslim men were shot dead in their mosque in Quebec City. According to Statistics Canada, hate crimes against Muslims grew by 253% from 2012 to 2015, largely propelled by incidents in Quebec and Ontario. Since Bill 21 was introduced in the National Assembly, Muslim women in the province say they have experienced increasing levels of provocation.

The end of the issue?

Though Legault has said he has presented the bill to bring closure to an issue that has dominated Quebec politics for over a decade, it’s unlikely this legislation will succeed in that. 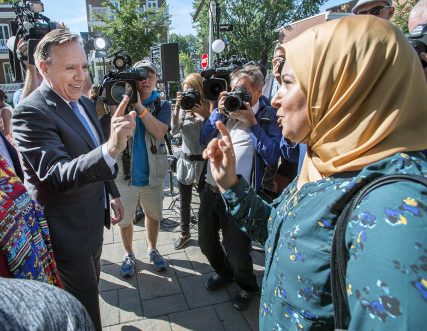 Coalition Avenir Quebec leader François Legault, left, speaks on the campaign trail in Montreal in September 2018 before the election that saw his party form a majority government. (The Canadian Press/Ryan Remiorz)

Opposition to Bill 21 is very forceful, Béland said, partly because a lot more people will be affected by this bill than by its previous iterations.

Opposition “is concentrated in Montreal, as it’s by far the largest city in the province and has the most immigrants and the largest Anglophone minority,” he said, referring to the city’s English speakers.

Anglophones, in Quebec and across the rest of Canada, are less likely to share the French-speaking population’s attachment to laïcité, a concept of secular assimilation that is also prized in France.

But there’s also a clash in age groups, Béland added. “Younger people care less about these issues than older people, and they give more weight to religious freedom than secularism.”

Protests were held in Quebec City on Wednesday against the bill.