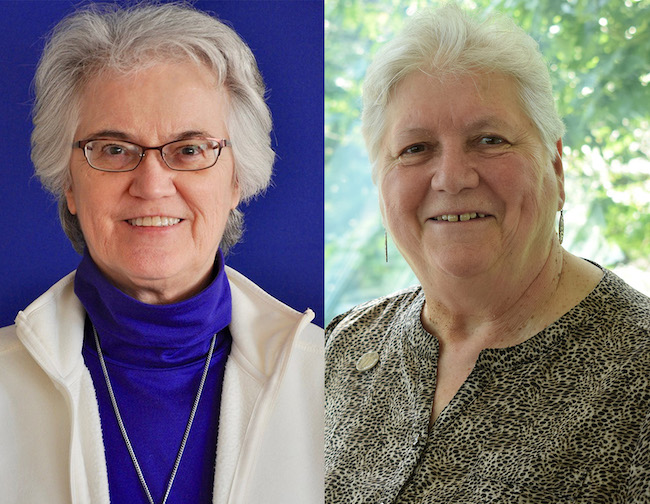 MARRIOTTSVILLE, Md.—Sister Pat Dowling has been named to the new position of international vocation coordinator for the Congregation of Bon Secours. In this role, she will coordinate all the vocation efforts for the congregation worldwide and work closely with the congregation’s vocation directors and promoters in the United States, Ireland, Great Britain, France and Peru.

“This is an exciting opportunity for the Sisters of Bon Secours to reach out around the globe to women who are considering religious life and want to explore with Bon Secours. We are responding to the inquiries of young women in Africa, South America and Europe. Requests are coming from countries where we do not have sisters, and this is a unique position for most congregations. Our congregation leadership, however, is committed to exploring beyond our geographic boundaries, which fits who we are today—a global congregation that is more agile in sharing resources across our countries,” Dowling said.

In 1997, she returned to the United States and created the Bon Secours Women’s Resource Center in West Baltimore and served as its first director before assuming the role of vocations director for the United States, a position she has held for the past 19 years.

Active in the congregation, Dowling has been a member of the board of directors of Bon Secours Health System, Bon Secours Ministries and Bon Secours of Maryland Foundation, where she currently serves as president of the board. She has also served as secretary/treasurer of the Sisters of Bon Secours USA leadership team and on many committees. She presently chairs the international vocation committee.

“I am so excited that Sister Pat has accepted the role of international vocation coordinator. We have identified vocation as a primary work of the congregation and could not have a better prepared, experienced person to lead this new initiative,” Congregation Leader Sister Pat Eck said.

In 2002, Gorsuch transferred from the Mission Helpers of the Sacred Heart to the Sisters of Bon Secours. Gorsuch joined the Mission Helpers in 1963. From 1981 to 2000, Gorsuch served in vocation, formation and congregation leadership in her community as well as working in Baltimore with parents in Head Start and as a pastoral associate in St. Jerome’s parish.

She moved to Suffern, New York, in 2000 to minister at Bon Secours Good Samaritan Hospital, where she was vice president for mission and then director of community initiatives. She returned to Baltimore in 2015 and has recently been serving at Bon Secours Hospital as the coordinator of trauma-informed care.

Gorsuch said, “What could possibly be more life giving than sharing what I love with others? This for me is the heart of our vocation ministry—helping other women listen to God’s invitation as it resonates with their own deepest desires. I hope to help others realize that life in community and ministry as a Sister of Bon Secours can be tremendously fulfilling and exciting. We have a future full of hope, and I am privileged to be part of it.”

“We are all so grateful for Sister Pat’s creativity and determination over the past 19 years that has built such a strong vocation presence within our community. We know she will take that same spirit to the international position. And, I know Sister Fran with her experience will bring great enthusiasm, energy and new creativity to her new position as vocation director for the United States, building upon the strong foundation created by Sister Pat,” said Sister Rose Marie Jasinski, leader for Sisters of Bon Secours USA.

The Congregation of the Sisters of Bon Secours, a religious congregation of Roman Catholic women founded in Paris in 1824, brings compassion, healing and liberation to those it serves, especially those who are sick, suffering, poor or dying. Whether in health care, education or social services, in hospitals, senior care facilities, clinics or parishes, in towns and cities or isolated villages, Bon Secours responds to a universal need: to provide to all who suffer a reason to live and a reason to hope. The Congregation of Bon Secours is headquartered in Marriottsville, Maryland, and has sisters in the United States, Ireland, Great Britain, France and Peru. (http://bonsecours.us)