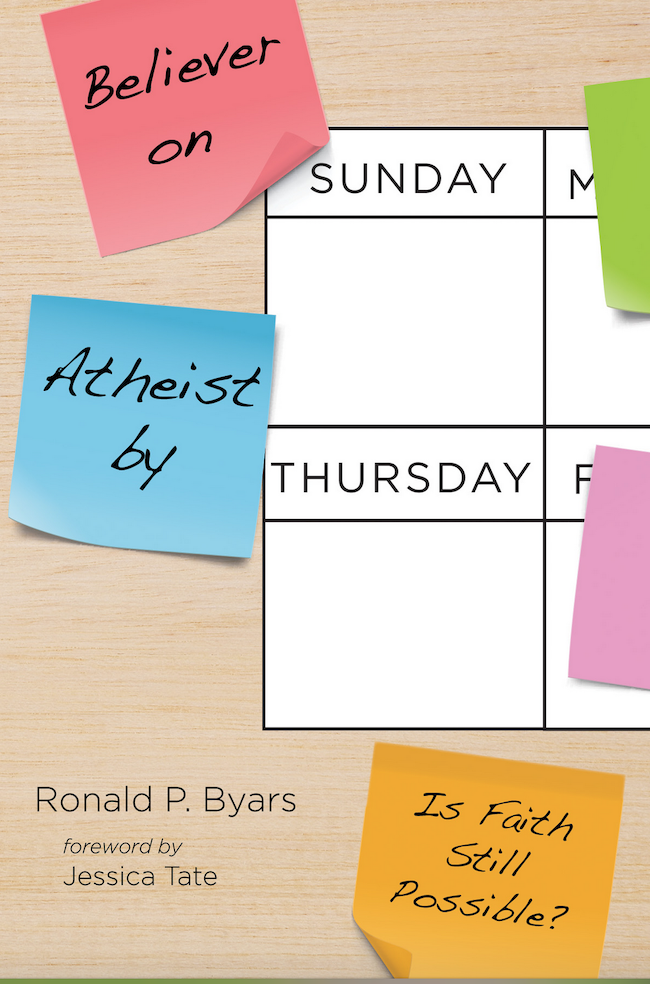 Believer on Sunday, Atheist by Thursday: Is Faith Still Possible? by Ronald Byars has been published by Cascade Books (wipfandstock.com). The title derives from a sermon preached by Pastor Ron Luckey for a Lutheran congregation in Lexington, Kentucky, daring to identify the elephant in the room. Why atheist by Thursday? For one, to mark some distance from the various fundamentalisms that have captured the narrative, redefining the word "Christian" for the general public. The redefined Jesus is a bit cranky, shaking a finger, scolding, dividing who's "in" from who's "out." A different but similarly absolutist alternative on offer, almost the default setting in contemporary culture, is a scornful skepticism of any kind of religious faith. Turning from both options, many thoughtful Christians in pew and pulpit are tempted to walk away from it all rather than play defense every day in a hostile environment. Can we explain, even to ourselves, why we have faith?

The big question is whether faith-particularly a classic, ecumenical, and generous Christian faith-is possible at all now that Enlightenment rationalism has trickled down from intellectuals to all the rest of us. Byars argues that this pervasive rationalism first served to broaden perspective, but now serves to narrow it. We are, in effect, self-disabled, not trusting ourselves to "know" anything not accessed through a detached, objective reasoning process.

Byars argues that the language of the Bible, the hymnal, the liturgy is not textbook language-not detached or objective-but artful language. It's language told "slant," using Emily Dickinson's word. It is to be "understood" holistically, engaging heart and will as well as the mind.

Most of the book reflects on the phenomenon of faith: what is it? how does anyone acquire it? Byars insists that one is not argued into faith. The process is a dynamic one, roughly resembling falling in love. It is an "attached" rather than a "detached" process. Chapters deal with the role of imagination in both science and faith; non-cognitive ways of "knowing"; the phenomenon of faith; the faith of the church; mission; and, addresses the question of whether faith, after all, is still possible.

This book is intended for general readers, but Fleming Rutledge suggests that it "will be tremendously encouraging to preachers." Byars, who served several pastorates, is Professor Emeritus at Union Presbyterian Seminary, and author of a number of books and contributor to others. The Foreword is by the Rev. Jessica Tate, founder and Director of NEXT church.