We are delighted that Tom will be joining us. Wycliffe aspires to be a centre for the intellectual renewal of the Church, and, through the Church, of society. I can think of no one who is better able to help us to make that aspiration a reality. Tom has reshaped the field of New Testament studies, he has defended the historicity of Jesus’ resurrection with a thoroughness and sophistication never before attempted, and his impact reaches far beyond the boundaries of the church by his engagement with the traditional and new forms of media. He will help foster an intellectual fearlessness and a disciplined spirituality in the next generation of church leaders. We look forward to welcoming him and Maggie back to Oxford. 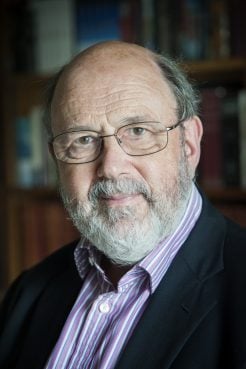 NT Wright (b.1948), who prepared for ordained ministry at Wycliffe Hall, is one of the world’s leading New Testament scholars, and a world authority on the apostle Paul. Wright is the author of over 80 academic and lay-level books such as Surprised by Hope, The Day The Revolution Began and Paul: A Biography (writing under the name Tom Wright for a general audience). Wright is ordained in the Church of England and, among other roles, served as Bishop of Durham between 2003 - 2010. Since 2010, NT Wright has been Professor of New Testament and Early Christianity at the University of St Andrews. He is much in demand as a lecturer around the world and author of the bestselling For Everyone commentary series and the New Testament For Everyone Bible translation.  In 2018, Wright delivered the prestigious Gifford Lectures, soon to be published as History and Eschatology: Jesus and the Promise of Natural Theology, entitled Discerning the Dawn: History, Eschatology and New Creation.

Notes for the Editor:

NT Wright was educated at Sedbergh School, then in Yorkshire, where he specialised in Classics.

From 1968 to 1971, he studied Literae Humaniores (or “Classics”, i.e. classical literature, philosophy, and history) at Exeter College, Oxford, receiving his BA with First Class Honours in 1971.

During that time, he was president of the undergraduate Oxford Inter-Collegiate Christian Union. In 1973, he received a BA in theology with First Class Honours from Exeter. He won a half-blue for Rugby Fives, and represented Exeter College in Rugby, Squash and Rowing

In 1975, he became a Junior Research Fellow at Merton College, Oxford and later also junior chaplain. From 1978 to 1981, he was Fellow and Chaplain at Downing College, Cambridge. In 1981, he received his DPhil from Merton College, Oxford, for his thesis, “The Messiah and the People of God: A Study in Pauline Theology with Particular Reference to the Argument of the Epistle to the Romans”.

After this, he served as Assistant Professor of New Testament Studies at McGill University, Montreal (1981–1986), then as Chaplain, Fellow and Tutor at Worcester College and lecturer in New Testament in the University of Oxford (1986–1993).

He moved from Oxford to be Dean of Lichfield (1994–1999) and then returned briefly to Oxford as Senior Research Fellow of Merton College, before taking up his appointment as Canon Theologian of Westminster Abbey in 2000.

In August 2010, he was appointed Research Professor of New Testament and Early Christianity at the University of St Andrews in Scotland, which enabled him to concentrate on his academic and broadcasting work.

Wycliffe Hall is a Church of England theological college and a Permanent Private Hall of the University of Oxford in the United Kingdom. The college is named after John Wycliffe, who was Master of Balliol College, Oxford in the 14th century.

Founded in 1877, Wycliffe Hall provides theological training to women and men for ordained and lay ministries in the Church of England as well as other Anglican and non-Anglican churches around the world.