LINDAU, Germany (RNS) — The international interfaith organization Religions for Peace introduced its first-ever female and first-ever Muslim secretary-general at its World Assembly on Friday (Aug. 23) and unveiled a joint declaration in which attendees vowed to join forces to confront an array of the world’s most difficult problems.

The final day of the Aug. 20-23 Religions for Peace World Assembly also included an emotional farewell to William Vendley, who retired after 25 years at the helm of the organization that he helped build into a global coalition of religions that acts as a consultative body for several United Nations agencies.

The joint declaration is a dense but optimistic four-page document drafted by delegates. It shines a light on contentious areas where, according to the declaration, “religious communities have fallen short.” Among the areas of contention are income inequality, gender issues, violent conflict, poverty, the spread of nuclear arms, human development, education and climate change — all of these fall under the wide umbrella of the world’s “shared well-being,” which is the motto of the assembly. 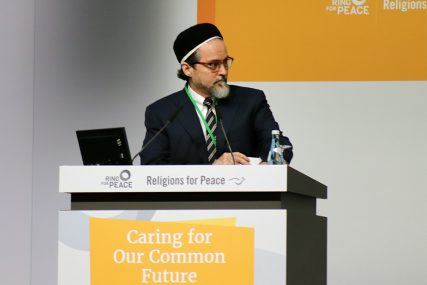 Within the declaration were several more specific agreements, such as the “Alliance of Virtue,” proposed by Shaykh Hamza Yusuf, vice president of the Forum for Promoting Peace in Muslim Societies. The alliance, already created among Abrahamic faiths by leaders such as Shaykh Abdallah bin Bayyah, who is president of the forum, would be extended to the wider array of faiths represented by Religions for Peace.

“We can differ about our concept of the divine and our understanding, but what we share is our understanding of the virtue of goodness and of beauty,” Yusuf, president of Zaytuna College in California and a member of the U.S. State Department’s new Commission on Unalienable Rights, told the assembly on Thursday.

“This is why we need our religious traditions to bring forth a declaration of virtue, of what we share in common universally, our shared virtue.”

Another agreement, the “Peace Charter for Forgiveness and Reconciliation,” aims to heal old wounds between communities, religious or otherwise. The Interfaith Rainforest Initiative was put at center stage due to the thousands of tragic wildfires burning in the Amazon Jungle as delegates met in Lindau.

Sonia Guajajara, head of the Articulation of the Indigenous Peoples of Brazil, called on delegates to take steps to call for the fires to be extinguished and to prevent the kind of land use policies that make the fires possible.

“We ask for help because what is happening in Brazil goes beyond Brazil and affects every one of us,” Guajajara said.

Delegates at the assembly also reaffirmed its support for the “Treaty on the Prohibition of Nuclear Weapons,” and for the United Nations’ “Sustainable Development Goals,” which seek to eliminate extreme poverty and hunger and to meet an array of other goals by 2030. All told, the 10th edition of the Religions for Peace World Assembly featured more than 1,000 religious figures and observers hailing from around 125 countries. Around 700 of those in attendance were voting delegates who approved the joint declaration and who elected Azza Karam to be the group’s next leader.

Karam is a senior advisor on social and cultural development with the UN Population Fund, where she has worked with faith-based groups. Before that, she was the senior policy research advisor at the United Nations Development Program in the Regional Bureau for Arab States, where she coordinated the Arab Human Development Reports.

She lives in Amsterdam, where she is a professor at Vrije Universiteit.

The assembly greeted Karam with enthusiastic applause when she was formally introduced. In remarks there, she vowed to continue what she called the “essential” work started by Vendley, who led Religions for Peace for more than half of the organization’s 49-year history.

“Compassion, mercy, love,” she said. “These are the pillars for which Religions for Peace stands, and must continue to stand.”

In her address to the assembly, Karam quoted from the traditions of at least half a dozen religious groups, mostly illustrating the importance of collaboration.

“When spider webs unite, they can tie up a lion,” Karam said, quoting an Ethiopian proverb. 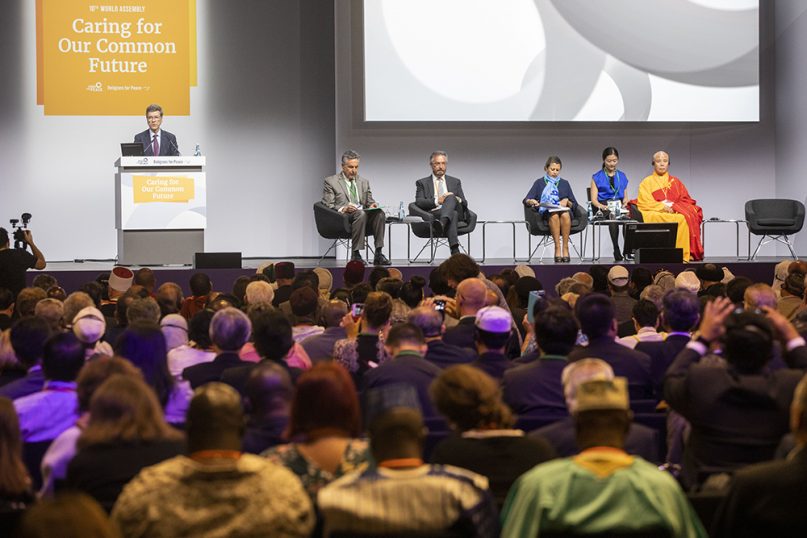