“I think it just makes sense to reach people where they are,” Buttigieg, an Episcopalian, told Religion News Service in a recent interview. “Making sure that people who are organized through faith have a way to connect with our campaign on that wavelength is important to me.”

Buttigieg, mayor of South Bend, Indiana, has become known on the campaign trail for his God-talk. In his standard stump speech, he’s made a point of connecting the divine to policy debates over immigration and the poor, all while slamming conservative Christian supporters of President Trump.

When it comes to the brass tacks of how he will use faith outreach as a modern Democrat, however, the strategic path for Buttigieg is less clear. As with other campaigns, Buttigieg mixes spiritual rhetoric with grassroots efforts to target the resurgent “religious left.”

But while the Trump administration’s approach to immigration and other social justice issues has energized faith-based activists to a pitch not seen since the 1970s, the religious left remains an amorphous, diverse group with few nationally known leaders.

Unlike Republican candidates, who can summon totemic conservative Christian figures such as Jerry Falwell Jr. or Robert Jeffress, the passionately pro-Trump pastor of First Baptist Church in Dallas, to focus evangelicals on electoral victory, Democrats must navigate a hodgepodge of religious groups that range from mainline, mostly white denominations to black churches to an array of non-Christian groups.

That doesn’t mean Democrats like Buttigieg aren’t trying. When it comes to mixing faith and politics, Buttigieg’s team started early. He praised the value of churches during one of his first campaign events at a Washington, D.C., bookstore in February. He later spoke about his faith at length during a question-and-answer session with political columnist Ana Marie Cox at the South by Southwest conference in early March.

During a breakout performance at a CNN town hall the same month, he sparked raucous applause for challenging the faith of Vice President Mike Pence and a few days later told anchors on MSNBC’s “Morning Joe” that “the time has come for more of a religious left to emerge in our country.” 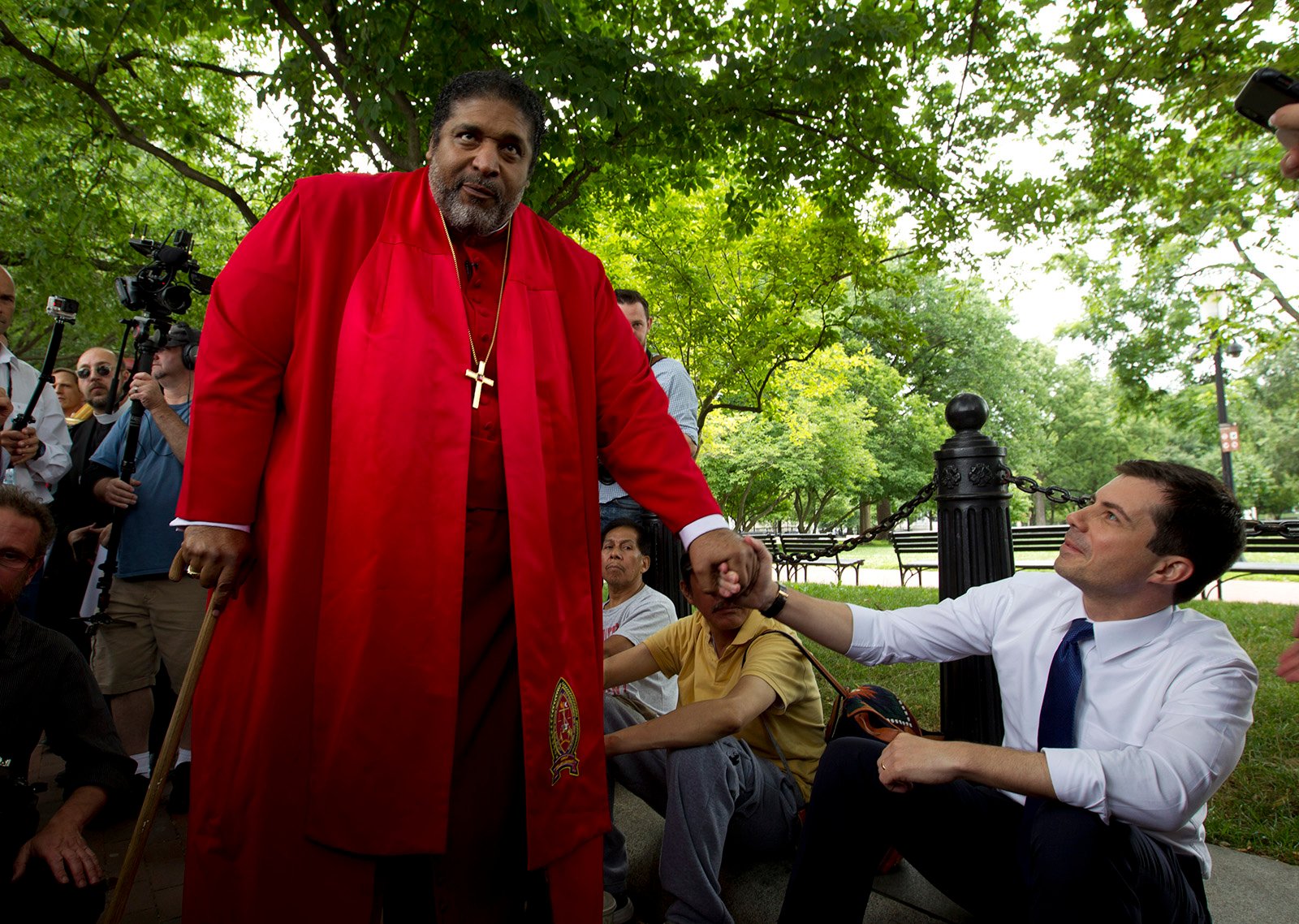 In March, Buttigieg name-checked the religious left again in an appearance on “Real Time With Bill Maher,” subtly shifting his rhetoric to argue that the liberal religious groups have existed for some time “often without much attention.”

His holy hustle may be a calculated choice, as Buttigieg is competing with some skilled God-talkers. Sen. Cory Booker, former U.S. Secretary of Housing and Urban Development Julián Castro and spiritual author Marianne Williamson have all invoked faith during public appearances. At a forum held by the Black Church PAC in Atlanta in August, Booker strode onstage like a preacher and delivered an address peppered with Bible verses.

But it is Buttigieg who has most successfully managed to attach his candidacy to the concept of a religious left, at the same time raising doubts about whether the effort could pay off or even whether a Democratic politician ought to galvanize left-leaning faithful in what is often perceived to be a devoutly secular party.

“The hesitancy that may have existed in the past in Democratic campaigns in terms of partnering with figures on the religious left … (has) been replaced by an acknowledgment that a lot of these leaders have been on the front lines of what is sometimes seen as a secular resistance movement,” said Amy Sullivan, author of “The Party Faithful: How and Why Democrats Are Closing the God Gap.”

Buttigieg has at times utilized an uncharacteristically quiet strategy (for a politician) to connect with liberal believers. He showed up to a protest outside the White House in June that was hosted by the Poor People’s Campaign, a prominent left-leaning effort co-chaired by the Rev. Liz Theoharis and the Rev. William Barber.

Buttigieg appeared at the protest with little fanfare, first sitting mutely at Barber’s feet and later standing in the crowd as he bore what he called “silent witness.”

Sullivan said the reserved approach signals to liberals that the Indiana mayor understands they don’t want a left-leaning version of the religious right, with politicians front and center.

“If you’ve got a photo or video of a religious left protest and there is Buttigieg silently standing to the side, that’s just instantly a contrasting visual with the religious right,” she said. 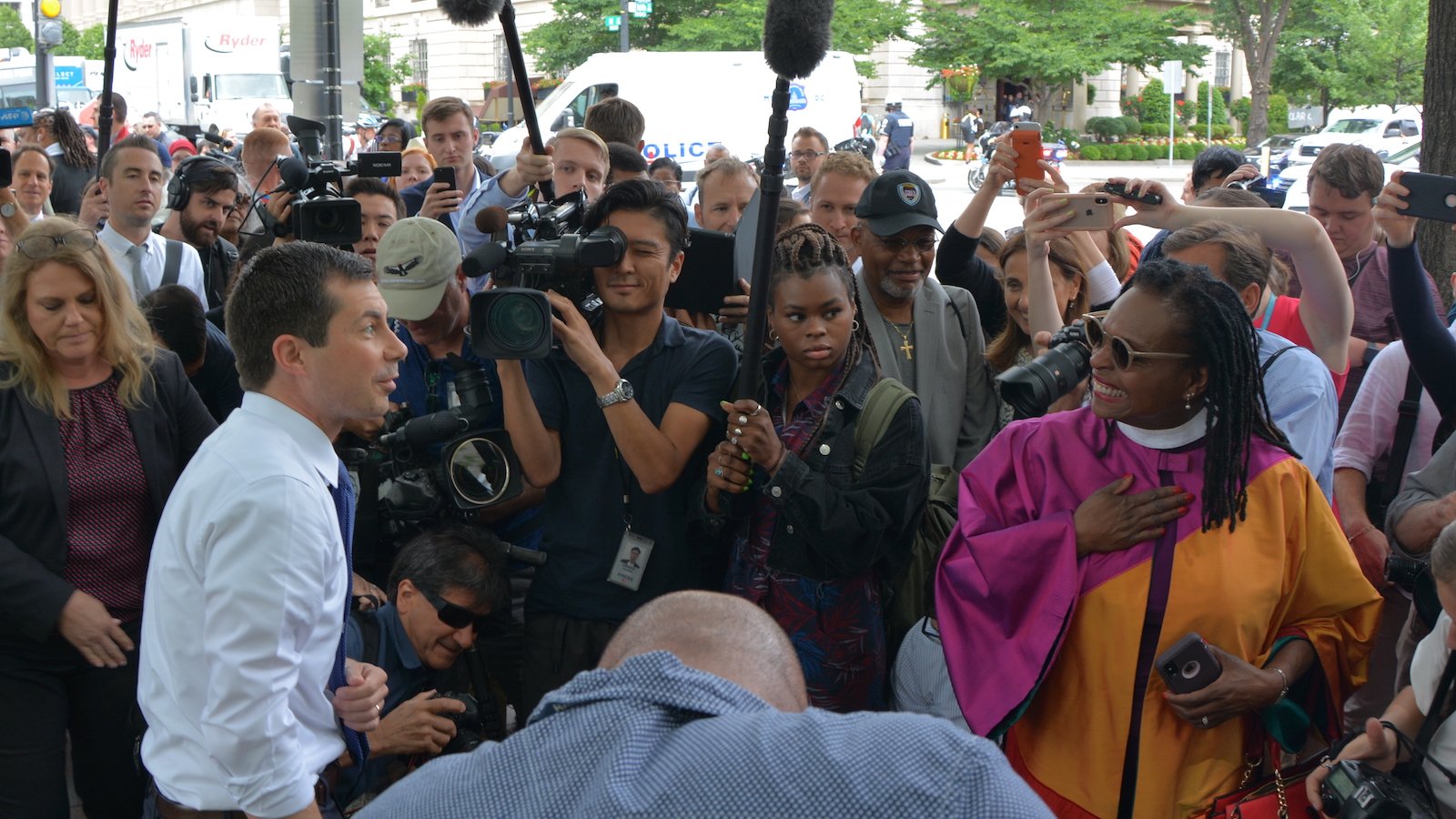 Asked what he saw in that protest, Buttigieg described a movement that wasn’t beholden to any political party — or, for that matter, any particular faith.

“What I saw was a moral call coming from people of many very different faith traditions, all concerned about how policies of this White House were harming those most in need of our support,” said Buttigieg. “There is something going on that is so much bigger than party politics right now. It’s a kind of stirring or reawakening.”

The mayor has lent support to the New Sanctuary Movement, in which undocumented immigrants at risk of deportation live in houses of worship in defiance of federal authorities. Officers arrested several members of a North Carolina congregation last year after they attempted to stop immigration officials from detaining a man who had been living in their church, and some immigrants taking refuge in sanctuaries now face major fines from the government.

Although Immigration and Customs Enforcement officials currently refrain from raiding churches and other “sensitive locations” as a matter of policy, advocates have called for Congress to codify the prohibition into law — a proposal Buttigieg’s campaign says he “strongly” supports.

“That has been part of (religious history) for centuries — the idea of literally refuge in a church,” Buttigieg said. “It’s something that shows you just the point we’ve come to, that people feel that they need to turn to a church for physical refuge from the federal government at a time like this.”

Buttigieg is quick to contrast the liberal churches’ approach with a critique of conservative Christians who back policies such as family separation.

“Buttigieg, more than anyone else, has really been willing to push conservatives on the nature of their religiosity and to go on the offensive,” said Sullivan.

As the primary season heads into fall, all the campaigns are examining the mechanics of turning good feelings into votes. In August, Buttigieg’s was the first campaign to hire a national faith outreach director, tapping the Rev. Shawna Foster, a Unitarian Universalist minister, for the role.

In her first interview in the job, she said her goal is partly to help the campaign reach out to non-Christian traditions she says have been ignored by politicians in both parties. 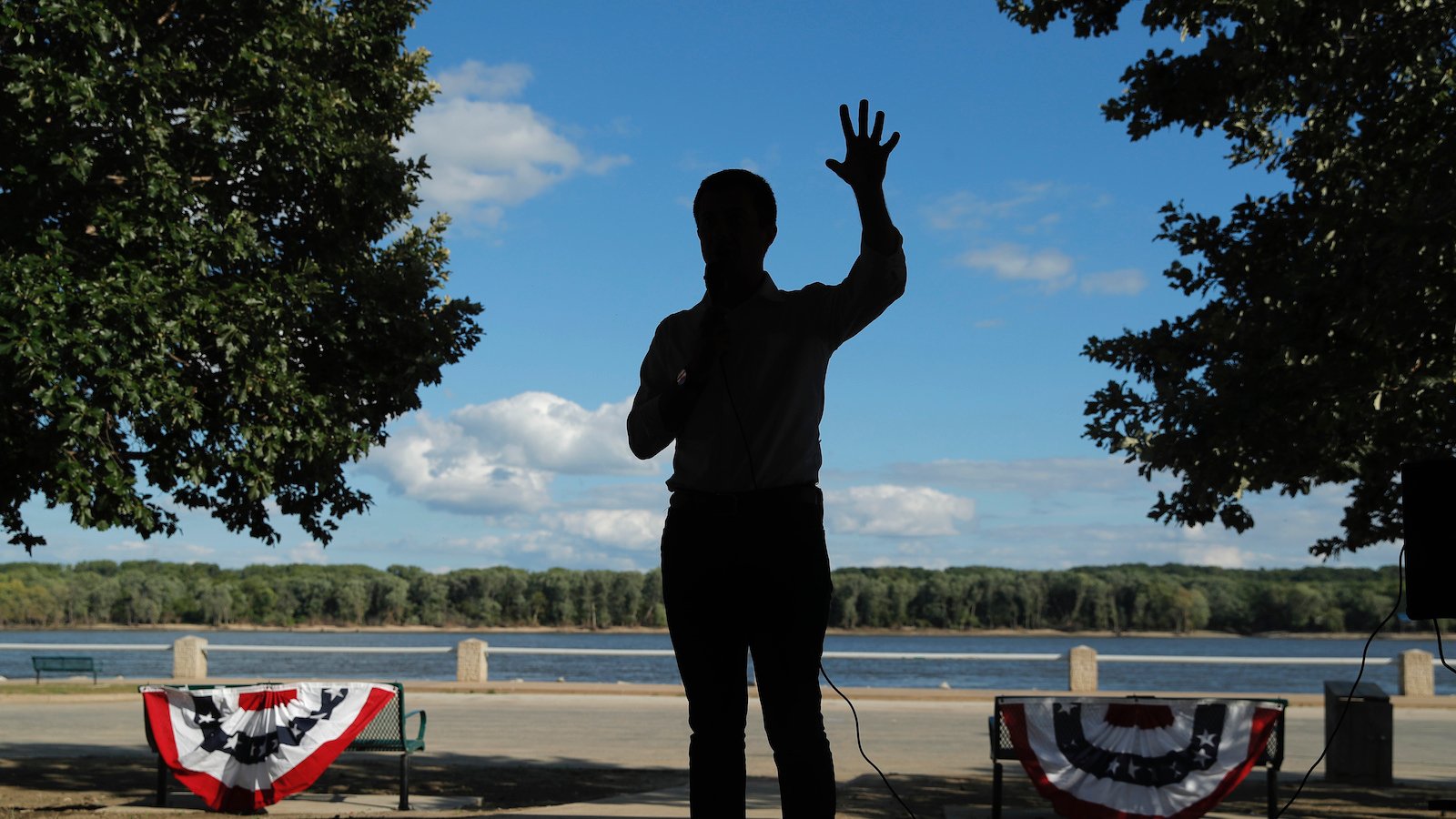 “The conversation about religion and politics has been dominated by one particular type of religion. … It can be so much more,” she told The Washington Post. “I want to make sure the campaign is really reaching out to faiths that typically haven’t had much say in politics — Native American spirituality, Sikh spirituality, Bahais.”

The approach could pay dividends in states, such as Michigan, with a robust Muslim population.

So far, Buttigieg’s position on faith has not swayed one crucial group of traditionally Democratic voters. As of July, Buttigieg claimed the support of only 1% of black voters in South Carolina, where African American Protestants wield outsized influence on the primary. By comparison, former Vice President Joe Biden drew 51%, with Kamala Harris running a distant second with 12%.

The Rev. Joseph Darby, pastor of Nichols Chapel AME Church in Charleston, said Buttigieg “does an excellent job of relating his faith to public policy. If he can do that, make the rounds at some churches, and do the same thing I would suggest of any other candidate: Just go and be authentic. Don’t try to be somebody that you aren’t.”

Darby acknowledged that while polls indicate African Americans have become increasingly affirming of same-sex marriage over the years, the topic remains a point of contention.

“Unfortunately, for some people I think his sexuality is going to be a problem,” Darby said, adding that the biggest hang-up for some voters isn’t so much that Buttigieg is gay as it is that he is married to another man.

But Buttigieg’s faith-rooted message on his marriage may yet be an asset: “If you are authentic, you can articulate what you believe, and you can relate that to your faith,” Darby said, “that’s helpful.”

Buttigieg’s marriage could turn out to be a kind of secret weapon, according to Sullivan, who said that while his left-leaning faith dismantles tidy truisms that religion is purely the purview of Republicans, it also shows how faith is a part of who he is.

“When Mayor Pete stands up as a gay man and talks about being married in his church, that simple statement doesn’t take hours of debate — it just blows away that false choice,” she said.