LOS ANGELES (RNS) — When a Jewish congregation in Los Angeles bought a new piece of property last summer, members wondered how they could use their new office and event space in a way that would align with their values.

They decided that sharing their parking lot with people living in their cars was the way to go.

In a county where more than 16,000 people live in their vehicles, it just seemed like “an obvious right thing for us to do and the right way for us to use our property,” said Brooke Wirtschafter, director of community organizing for post-denominational Jewish congregation Ikar.

Late last year, Ikar became the latest house of worship to partner with Safe Parking LA, a nonprofit that provides safe places to park overnight for those living in their cars.

As Los Angeles city officials consider a plan that would bar homeless people from sitting or sleeping near schools and parks,  Ikar’s participation “is a testament to those faith community leaders to want to say, ‘Look, this is doable,’” said Emily Uyeda Kantrim, with Safe Parking LA.

In the city, there’s already an ordinance in place that makes it illegal for people to sleep in a car in residential areas. 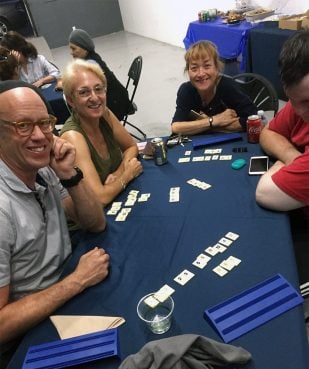 People play games after a communal dinner at Congregation Ikar, which is allowing people living in vehicles to stay overnight in the Ikar parking lot. Photo courtesy of Brooke Wirtschafter

Under the program, it costs about $30 for one vehicle to park overnight. So if a group can and wants to accommodate 20 cars, it would cost more than $200,000 a year to provide a safe parking program. The price tag covers security guards and restroom facilities that Safe Parking LA provides on site.

The nonprofit has launched eight safe parking sites and is expecting to set up another safe lot by October. It serves about 200 clients on any given time, Kantrim said. So far, two faith congregations are involved.

When Safe Parking LA started in 2016, organizers envisioned a surge of churches and synagogues lining up to offer parking spaces for the night.

However, Kantrim said, “nobody wanted to stand up and be first.”

Now, more faith communities are stepping up, she said. Another faith congregation in the valley has expressed interest, Kantrim said.

Wirtschafter said she’s heard some congregations have been concerned about safety, especially at houses of worship that have preschools.

At Ikar, the experience has been nothing but positive.

“There’s no downside for us. There’s really nothing about it that’s been negative,” said Wirtschafter.

After Ikar’s involvement, the Jewish Community Foundation of Los Angeles announced in August that it would give $300,000 over three years to Safe Parking LA. The organization said in a statement it aimed to “engage synagogues and their members in providing safe parking options and supportive services for individuals living in their vehicles.”

Safe Parking LA organizers said the money would help expand their program into other synagogues in the city and county.

Ikar has space for 10 cars, but there’s always turnover. Wirtschafter said Safe Parking LA has a waiting list, showing that people are eager to get in their lot.

To Wirtschafter, this program has helped members better understand how homelessness affects people living in Los Angeles. Congregation members have gotten to know their guests better by having dinner parties twice a month. Members and guests eat “as equals sitting down together to share a meal and to talk to one another like human beings, which is what we all are,” Wirtschafter said.

Some of their guests have included a mother and daughter who opted to move into their car when they couldn’t afford rent and medical expenses while both were in community college. Others have been living in their cars after they lost their job, got divorced or experienced a rent increase.

“Many of us have a lot of preconceptions about what it means to be homeless that are quickly shattered by getting to know actual people who are facing life in this way,” Wirtschafter said.

At the core of every major religion’s message, Wirtschafter sees the responsibility to see the “divinity in other human beings.”

“This is something that really any faith community can do and take on,” she said.

Opinion
‘Russian Doll’ is the story of Jewish history

Martini Judaism
An old synagogue in Krakow could heal our social ills
Follow us on Facebook!
Submit your photos to RNS