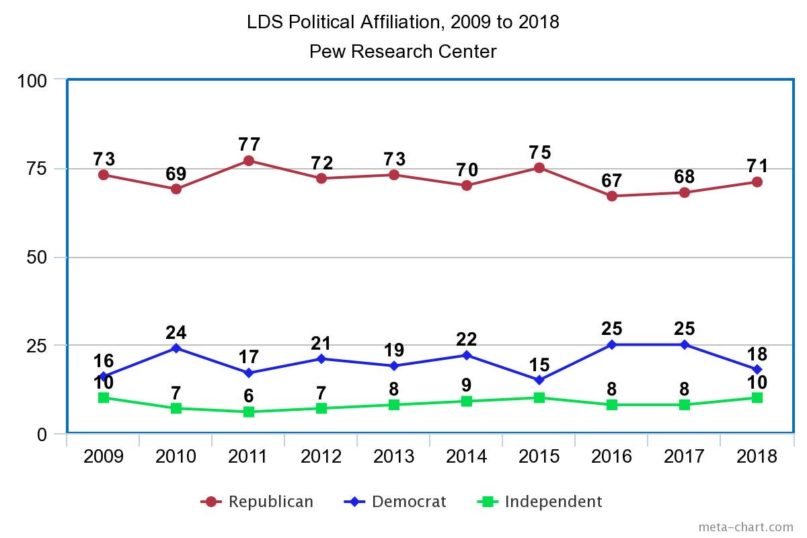 (RNS) — Nearly three-quarters of American Mormons affiliate with or lean toward the Republican Party, according to a Pew Research Center report that aggregates data collected from 88 political surveys over the last decade.

In one sense that’s not terribly surprising, given that members of the Church of Jesus Christ of Latter-day Saints have since the 1950s displayed a strong affinity for the GOP.

“Mormons are a pretty strongly Republican group,” says Gregory Smith, associate director for research at Pew Research Center. Over the course of the decade, their GOP affiliation has remained within the same 10-point range, with a high of 77% in 2011 and a low of 67% in 2016, the year Donald Trump was elected president.

The “Trump effect” is a real thing: Trump is markedly less popular with the faithful in Utah than previous GOP presidents. For example, 77% of Mormons approved of George W. Bush’s presidency from 2001 to 2003, compared with just 52% who approved of Trump in a Pew study released earlier this year. That 25-point drop was a significant indication of how many Mormons dislike the president, with approval being lowest among women (42%) and Mormons under age 50 (46%).

What the aggregated study seems to demonstrate, though, is that Mormons don’t appear to be applying their coolness about Trump to the party as a whole. Although LDS support for the GOP dipped slightly during the 2016 election, it has stabilized.

Two other items stood out from the decade of Pew research.

First, people who self-identify as Latter-day Saints continue to attend church at a high rate compared with others in the U.S. population. In 2009, 87% of Mormons said they attended church at least monthly, with only 12% reporting that they attended a few times a year, seldom or never. 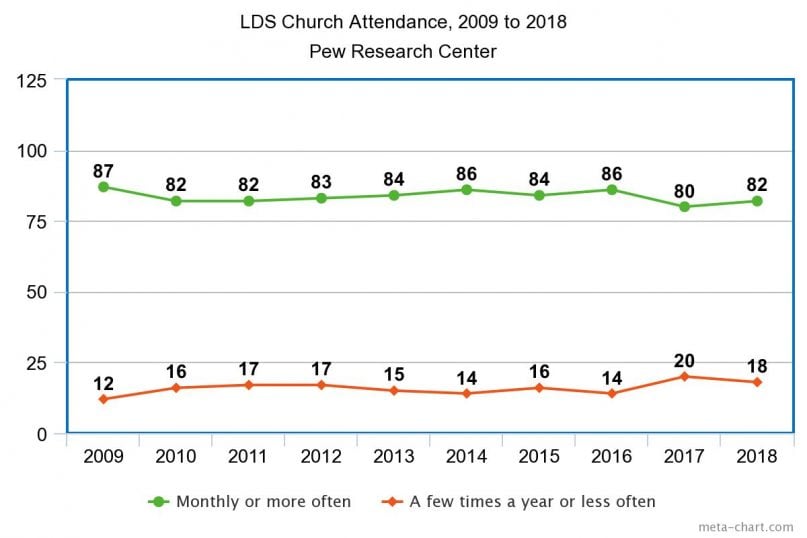 While the percentage in the “few times a year or less often” category has increased by 6 points and the percentage in the “monthly or more often” category has decreased by 5, Mormon attendance is quite high when compared with the sharp declines in religious attendance in America as a whole. Among all respondents, 45% reported monthly attendance in 2018, and 61% of those who identified as Christian. Mormons, then, are frequent religious attenders even when compared to other Christians.

“If I was to describe that trend line, it reminds me of the trend line for Christians as a whole, with fairly stable rates of attendance,” says Smith. “Attendance is higher among Mormons than among other Christians, but fairly stable over time.”

Second, the overall share of self-identified Mormons in the U.S. population continues to be 2%, which has been stable over the decade.

However, there are signs that this may be declining. Pew has not broken out each year’s data to the decimal point, which means that a 2% share could represent anything from 1.5% to 2.4%; a 1% figure could represent a range from .5% to 1.4%. Among members of two subgroups — men and millennials — the most recent data shows the Mormon share to be 1%.

What is growing — and quickly — are the ranks of the unaffiliated, often called the "nones," who went from 27% of the millennial population in 2009 to 40% last year.

Smith says generational replacement is key to understanding what is happening more generally with religion in America.

“You see older cohorts, the silent generation and the baby boomers, who on average are quite religious," he said. "Most of them describe themselves as Christians, and they tend to be pretty religiously observant."

More than half of U.S. Mormons approve of Trump — but not among women