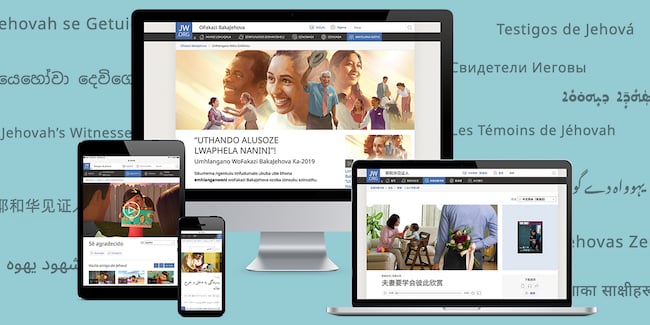 Gerrit Lösch, a senior member of the Witnesses’ Governing Body, states: “Our translation work has a long history dating back to the late 1800’s and has increased dramatically in recent years.” Geoffrey Jackson, also a member of the Governing Body, adds: “It took us a little over a hundred years to reach 508 languages in January 2013. But it’s remarkable that in just under seven years we have nearly doubled our translation production—from 508 languages to 1,000.”In addition to offering a wealth of downloadable material in 1,000 languages, jw.org’s home page and other pages can be navigated in an unprecedented 821 languages, making it the most widely translated website in the world.

“It’s remarkable that in just under seven years we have nearly doubled our translation production—from 508 languages to 1,000.”—Geoffrey Jackson, a member of the Governing Body

John Yunker, author of The Web Globalization Report Card, states: “The internet connects computers, but languages connect people. . . . The jw.org website shows great respect for those who speak languages that may not be supported by the Fortune 500. But on a larger level, jw.org is ahead of the curve. Even Facebook, with support for more than 100 languages, has a long way to go. And while the jw.org effort is volunteer-driven, it even outpaces the world’s most popular crowdsourced website, Wikipedia, with support for more than 280 languages.”

Mr. Yunker adds: “The jw.org website places its ‘global gateway’ prominently in the header, on par with the logo, which not only makes the gateway easy to find for visitors from around the world—no matter what language they may speak—but also sends a clear message that Jehovah’s Witnesses prioritize languages.”

When considering whether or not to translate into a new language, commercial websites usually limit their efforts to languages that will be significantly profitable. For Jehovah’s Witnesses, though, profit is not the motive. Their goal is to translate the Bible’s message so that it is accurate, clear, and easy for readers to benefit from.”

“[When] analyzing the translation work [of Jehovah’s Witnesses],” states translation scholar Gerhard Budin, “it becomes clear that the basic principles of translation studies, as well as best practices in practical translation work, are fully respected. This manifests itself in easy-to-read texts in multiple language versions of the journal The Watchtower, for example, while addressing a broad audience of people in each language community.”

“Translating into and publishing in so many languages can pose special challenges,” explains Izak Marais, who directs the Translation Services group at the world headquarters in Warwick, New York, U.S.A. “At times we wanted to publish in a less common language, but not all the characters were available for that language. So, over the years, we have provided artwork for countless characters and font sets, allowing us to produce printed publications in hundreds of languages. Similarly, we have overcome many challenges to make our publications available in the many languages on jw.org. In fact, many of those 1,000 languages have no other publications available on the web.”

Clive Martin, who directs the MEPS Programming division responsible for publishing content on jw.org, added: “One challenge we have faced is how to represent an article in hundreds of languages, with different scripts and layouts, on a single website. For example, 21 of the languages we support are written from right to left. For the 100 sign languages we support, we had to create a unique design that is easy for deaf users to navigate.”

As early as 1881, the Bible Students, as Jehovah’s Witnesses were then known, began preparing for the production and distribution of Bible literature in languages other than English. “Back then,” says Mr. Jackson, “likely no one could have imagined translating into 1,000 languages!”