(RNS) — Hari Kondabolu might be the only comic in the world with a Netflix special and a graduate degree in human rights. What’s even more surprising about him is his ability to put comedy and social justice together. Kondabolu’s “Warn Your Relatives,” which debuted on Netflix in spring of 2018, is a good example of his style: laugh-out-loud funny while managing to infuse its humor with social and political consciousness.

I first encountered Kondabolu’s comedy in 2012 on the FX political commentary show “Totally Biased with W. Kamau Bell,” where he stood out as one of the few South Asian comedians who could make us laugh without poking fun at our culture and heritage. A couple of years later, Hari became one of the first South Asian comedians to appear on “The Late Show With David Letterman,” which, in my book, signaled that he had made it.

Though he had always discussed racism in his act, Kondabolu drilled down on attitudes toward South Asian Americans in his 2017 documentary “The Problem With Apu.” Enlisting other South Asian comics and others, the film explored the caricaturization of Apu, the convenience store owner on “The Simpsons,” as a case study for how South Asian identities were portrayed in television and film. Watching his film made me feel seen, even as it embarrassed me for never having realized, in the years that I had watched and enjoyed “The Simpsons,” that Apu was a racist caricature until Kondabolu talked about it. I had the privilege of sitting down with Kondabolu to learn more about his personal journey, how his unique upbringing shaped his worldview and how he thinks about comedy that’s politically conscious and socially aware. The following is an excerpt from our conversation that has been slightly edited for length and clarity. You can hear the full interview on my new podcast, “Spirited.” Listen on any of the major podcast apps:Apple Podcasts, Spotify and Stitcher.

Q: So much of your comedy is steeped in justice. Where did that come from?

A: I think I draw a lot of it from my mom. She was a doctor in India and in the U.S. had to work at a job that she was overqualified for while raising two kids. I mean, she never taught us about justice and wasn’t ever political. It was very personal, very one-on-one: what’s right, what’s wrong, what’s fair, what’s unfair. I saw patriarchy in practice and I saw that kind of unfairness. I think when you see that unfairness, it seeps in.

Q: Comedy isn’t always at the cutting edge of justice, though. How do you bring attention to these kinds of issues without compromising your jokes?

A: I always want something that’s funny. I want to make as many people laugh as possible, but I’m making them laugh on my terms. I don’t want them to laugh at the face value of the joke, rather the point it’s trying to make. 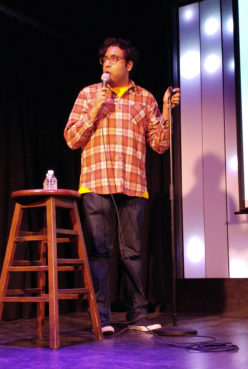 Hari Kondabolu performs at Littlefield in Brooklyn on Dec. 27, 2017. Photo by Sumanah/Creative Commons

The jokes have to be coming from a righteous place. If you’re going to fight racism, you can’t be sexist while you do it. It’s the idea of like punching up instead of kicking down. I think there’s something cowardly about finding an easy target because the person can’t defend themselves because they’re in the minority because they have less power versus going after something loftier.

Q: Do you have rules for what’s appropriate when talking about particular communities?

A: I want the power of the joke to be more than the voice or the accent (of a person from that community). I can imagine people hearing my father talk and then laughing behind his back after he walks away. I can imagine the impressions they do. Of course I can, because I’ve heard people do that to other people.

So I don’t want to ever depict my parents as stupid, because they’re not stupid. I can depict them as funny and quirky because all humans have those quirks. It’s making sure that the people in your life, especially if they’re in marginalized positions – that you’re doing them justice and that you’re not just treating them like punching bags or caricatures or silly voices.

Q: You talked a bit about humility and the importance of having perspective in this world. It seems like that’s an important aspect of who you are as a person. 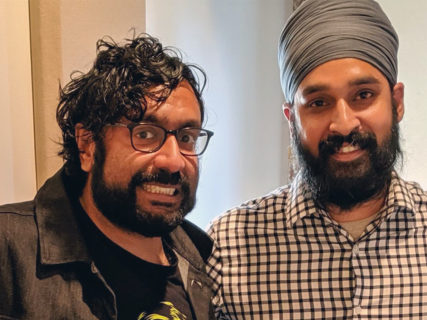 A: Absolutely. Artists are trying to hit a moving target. So I’m aware that something I feel or something I created in one moment will no longer make sense in another moment. That’s just how things work. To stay relevant and to stay thoughtful as a person and as an artist, I have to keep up to the best of my ability. The world needs to be a more just place. To me, that’s my responsibility as a human to keep up with.

Martini Judaism
The hidden Jewishness of the Chicago 7
Faith
Episcopal men’s ministry loses board members, chapters over response to George Floyd’s death
News
Biden campaign labels racism as religious issue at post-debate event
Opinion
Demonizing white evangelicals won’t solve our political divisions
News
Black Jesus version of Michelangelo’s Pietà divides Catholics on race and politics
© Copyright 2020, Religion News Service. All rights reserved. Use of and/or registration on any portion of this site constitutes acceptance of our User Agreement and Privacy Policy, Privacy Statement and Cookie Notice. The material on this site may not be reproduced, distributed, transmitted, cached or otherwise used, except with the prior written permission of Religion News Service.