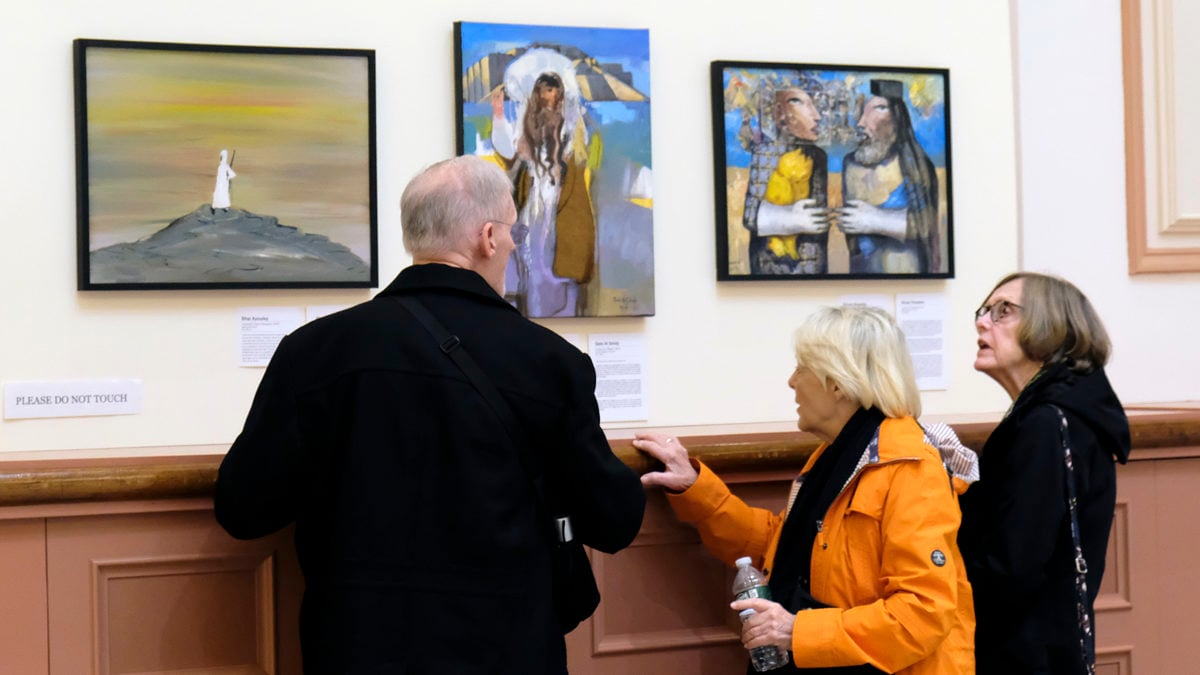 Visitors from Trinity Episcopal Cathedral in Little Rock, Arkansas, view art in the “Abraham: Out of One, Many” exhibition at St. Paul Cathedral in Boston. RNS photo by Aysha Khan
November 11, 2019
Aysha Khan

BOSTON (RNS) — Just over a year ago, the day after the deadly mass shooting at Pittsburgh’s Tree of Life Synagogue, more than a thousand locals gathered together on the Boston Common to mourn and pray.

As the Rev. Amy McCreath, dean of the historic St. Paul Cathedral that overlooks America’s oldest park, watched people of various faiths unite once again to mourn another national tragedy, she was hit with an emotional realization.

“I looked out over the crowds of people, and it was so clear that all of them really want a peaceful future,” she remembered. “We want to work together against violence, but we don't even know each other. Unfortunately, the odds are good that something like that will happen again, and we need to be prepared to support one another and defend one another.” 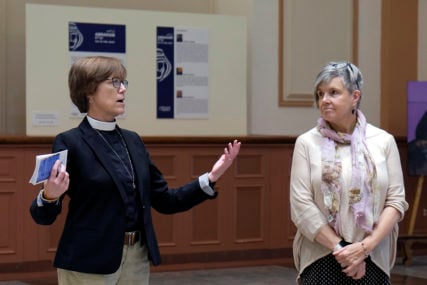 That’s part of the reason the Episcopal cathedral agreed to host a new interfaith art exhibit that explores the faith and life of Abraham, the shared spiritual forefather of the world’s three largest monotheistic religions — and launched an accompanying interfaith book study to spotlight Abraham’s wives, Sarah and Hagar.

The two-year touring exhibition “Abraham: Out of One, Many,” is curated by the Rev. Paul-Gordon Chandler of Caravan, an international art non-profit affiliated with the Episcopal Church. After premiering in Rome in May, the show began a 20-month U.S. tour at Nebraska’s Tri-Faith Initiative this fall.

Late last month, St. Paul received the 15 paintings, which are arranged in sets of three to illustrate Abraham’s journey through the eyes of Middle Eastern artists from Muslim, Christian and Jewish backgrounds. The art will be displayed there through Dec. 6.

“Abraham is a complicated figure, and his legacy in human history is very complex. It's not all flowers and roses,” McCreath told Religion News Service. “Many people who come to the exhibit are familiar with the basic stories from scripture, and each piece of art invites them to think more deeply about each story, interrogate it, see more in it.” The exhibition is a response to the new wave of anti-Semitic and anti-Muslim hate, as well as the “general climate of growing prejudice and stereotyping” and “tribalism,” that have enveloped the country, Caravan president and exhibition curator Rev. Paul-Gordon Chandler said.

“In these three faith traditions, whose followers are referred to as ‘children of Abraham,’ Abraham is seen as a model of hospitality — of welcoming the ‘stranger’ and embracing the ‘other,’” Chandler, who was recently appointed rector of The Anglican Centre in Qatar, said. “The exhibition attempts to artistically answer the question, ‘What can Abraham teach us today about freeing our world from sectarian strife?’” 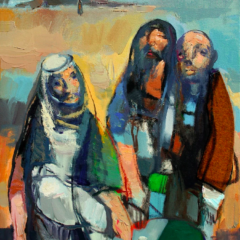 In Al Sindy’s interpretation of “Welcoming the Stranger,” the artist reimagines the iconic image of three men visiting Abraham — sometimes interpreted as the three parts of the Christian Trinity — as representatives of the three Abrahamic faiths. Hussein depicts Abraham’s son Ishmael as the stranger, noting that Ishmael is often sidelined as a character outside of Islam’s telling of the story, while Azoulay’s painting shows the continuous nature of Abraham's welcome of the three strangers in the desert.

“This cathedral was really founded with a vision of being a place where people of all faiths could come together and deepen their appreciation for one another,” McCreath said.

Indeed, for the past two decades hundreds of local Muslims have been holding their weekly Jummah prayers there. The church’s tagline, “A House of Prayer for All People,” pulled from Isaiah 56:7, is embossed over the foot baths installed to make performing ablutions easier. Church leaders partnered with a handful of local Jewish and Muslim congregations — including Central Reform Temple, Emmanuel Church and the Dar Al-Islam Jummah gathering — both to present the artwork and to develop a series of accompanying events to deepen the impact of Caravan’s exhibition.

On Nov. 23, the cathedral will host a concert by local choir et al. incorporating music from the three faith traditions. And every Sunday until Dec. 8, members of the public are invited to join St. Paul leaders in an interfaith dialogue on the 2006 book “Hagar, Sarah, and Their Children: Jewish, Christian, and Muslim Perspectives.”

When book study organizer Jane Redmont, co-chair of the Episcopal Diocese of Massachusetts’ Bishops’ Commission for Ecumenical and Interreligious Relations, raised her hand during early exhibit planning meetings to bring up representation of Sarah and Hagar, members were immediately supportive.

“We wanted to bring in the stories and the realities of the women and children in the Abraham story, because they’re an integral part of it,” Redmont said. “This is not an either-or situation. It’s a both-and.”

The book, edited by feminist biblical scholars Phyllis Trible and Letty Russell, includes essays by three women scholars from each faith tradition. With each reading group session, a local woman scholar or faith leader of that tradition leads a facilitated discussion on a chapter of the book and what the figures of Sarah and Hagar mean for different communities.

“Abraham is not a lone figure,” Redmont said. “He certainly must have felt alone when he left his home and followed a divine call that nobody else was hearing, but he did that with his family and his servants and his animals.”

When that family expanded with his wife Sarah gifting her slave, Hagar, to Abraham in the hopes that Hagar would bear children, the situation became complex, Redmont said. Various traditions detail serious conflicts between Abraham and Sarah as well as between Sarah and Hagar. 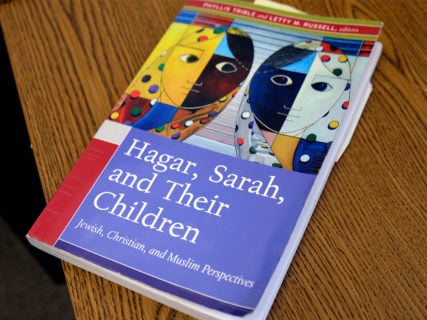 The reading group is also a chance for locals to enhance their religious literacy, including re-examining elements of their own faith tradition, Redmont said.

The figure of Hagar, especially, has undergone a “sort of rediscovery,” as Redmont put it, among scholars and faith leaders over the past few decades. That trend is evident in Nyasha Junior's new book “Reimagining Hagar,” Mohja Kahf’s 2016 anthology “Hagar Poems” and a recent push among Muslim women scholars for imams to deliver Eid al-Adha sermons focused on Hagar’s sacrifices and strength, among other initiatives. Redmont said many people are particularly unaware of Hagar’s prominence in Islam. For Muslims, Hagar is believed to be the mother of all Arab people and the matriarch from whom the Prophet Muhammad eventually descends. She figures prominently in hajj rituals, with many elements of the pilgrimage coming from stories of her efforts to survive in the wilderness outside Mecca with Ishmael. Many Muslims also believe she and Ishmael are buried at the Kaaba, which Abraham is believed to have built.

Both Sarah and Hagar, along with their children Isaac and Ishmael, are often taken as symbols of the Israeli and Palestinian conflict, Redmont also noted, because they are seen as the ancestors of Jewish and Muslim people, respectively.

That modern context makes a “very live backdrop” for the exhibit and for the reading group, she said.

“We’re not going to solve these problems with an exhibit or a book group, and nobody's under any illusion that we are,” she added. “But we have to start somewhere. And what art can do is it can open people's hearts and put them in a contemplative space.”