ALHAMBRA, Calif. (RNS) — A notice taped on a nearby tree is the only official word that Sikh worshipers say they received about plans to raze the gurdwara where they’ve gathered for decades.

A four-story commercial and residential condominium complex is now planned to take over the Sikh Community Gurdwara in Alhambra, a San Gabriel Valley city about 10 miles east of downtown Los Angeles.

The project has been approved by the city of Alhambra’s Planning Commission. Plumbing and electrical plans have been submitted. About half a million dollars, the developer and landowner said, has already been spent.

But Sikh worshipers said their landlord never informed them that the building where they’ve gathered for decades will be demolished. Their landlord said he told them changes were coming. And he said the community has had only a month-to-month lease on the building.

The Sikh community is now getting one last chance at a new public hearing to speak in favor of their place of worship, that they say, is a sacred space.

Santokh Singh, president of the Sikh Community Gurdwara, told Religion News Service that in the Sikh faith, when a location becomes a gurdwara, “the land is blessed.”

Under the project, the gurdwara would be combined with adjacent parcels to develop the condominium complex.

But the project may be on hold, at least for a little while. Sikh Community Gurdwara members in Alhambra, California, are hoping to remain at their worship site despite condominium plans that have been approved to take over the building. RNS photo by Alejandra Molina

The Alhambra City Council on Oct. 28 ordered the Planning Commission to hold an upcoming public hearing to consider revoking its approval after Sikh members of the gurdwara and their advocates argued they didn’t receive enough notice of the developer’s plans.

There has also been confusion over whether the Sikh community still worshipped at the site.

A city staff report for a June 17 Planning Commission meeting described the Sikh temple as a vacant lot. During that meeting, government records show, some commission members were unaware that the Sikh community occupied the site. Landowner and developer Harold Lau was at the meeting and told the commission the gurdwara “was still operating there.” The Planning Commission approved the project that evening.

Members of the gurdwara see this new public hearing — scheduled for Dec. 2 — as a fair chance to speak and give their side of the story. By the time they saw the notice on the tree, the Planning Commission had already approved the project, they said.

“People are so attached to that building,” Singh told Religion News Service.

Vanessa Reynoso, deputy director of the city’s Community Development Department, confirmed the date of the upcoming hearing, but would not give further comment about the project. However, City Attorney Joseph Montes, at the Oct. 28 meeting, said the only grounds for revocation would be if the Planning Commission found that the project’s “entitlements” were secured through fraudulent means.

The Sikh community has worshipped at the Alhambra location since the late 1970s, Singh said. In 2005, gurdwara leaders sold the property to Lau. And in 2015, Santokh Sing committed to a one-year lease and then rented the space on a month-to-month basis.

Lau addressed the City Council on Oct. 28 and said he told the gurdwara their time would be limited there because “we have plans.” Lau has been unable to be reached for comment.

The city said it adhered to city code when it posted about the development’s June public hearing notice on the parkway tree in front of the gurdwara. It also published a legal public notice in the local newspaper. 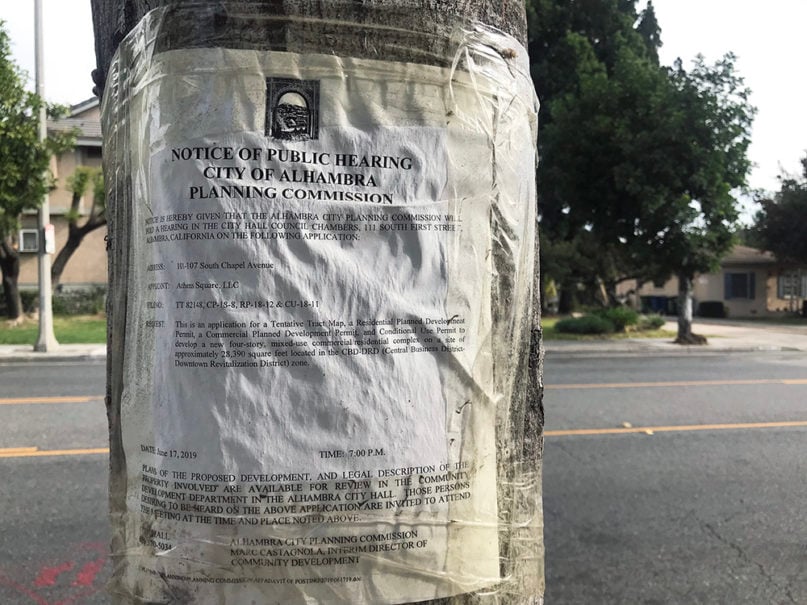 The Sikh community in Alhambra said the only official word they got about plans to demolish thei gurdwara was through a note taped to a nearby tree. RNS photo by Alejandra Molina

Still, Singh said he found out about Lau’s condo plans from Linda Paquette, who worships at the gurdwara. Paquette learned of the Planning Commission’s project approval from her friend Bertha Rivera, an Alhambra resident who often attends public city meetings.

An attorney, Paquette has been helping gurdwara members make their case to remain in the space.

First, Paquette said, they had to make the city aware of the Sikh’s presence in the community. The gurdwara has a membership of about 300. They help feed the homeless, and most recently, they hosted a celebration for the festival of lights that brought a large crowd. It regularly attracts more than 100 people to worship every Sunday.

Paquette was raised Baptist and Catholic and still practices Catholicism, but she also worships at the gurdwara. Meditation attracted her to the Sikh’s worship site, she said.

She hopes the Sikhs will not be uprooted from their place of worship.

“Would they do that if they were Baptists, Catholics, Protestants of every kind? No, I think the answer is no,” Paquette said.

Singh fears his community will have to move out of the area to find another gurdwara to worship in. He said they’re paying $4,750 in monthly rent to worship at the location.

“We don’t consider it a business,” he told Religion News Service. “It’s s a place of worship. It’s a spiritual thing.”

He expressed to the the council on Oct. 28 that the Sikh faith is “a human religion.”

“We believe everyone is equal,” Singh said. “As long as you are human, you are our brothers and sisters.”

City Councilman Jeffrey Koji Maloney said it’s not the city’s intention to insert themselves in a landlord and tenant dispute, but said he hopes the public hearing could help the Sikh community and Lau to “figure something out that’s meaningful and work on both sides.”