(RNS) — For the next three months, a group of Muslim volunteers is driving through the streets of downtown Toronto in a repurposed coach bus to offer the city’s homeless population a refuge from the brutal winter weather.

Project leaders told Religion News Service that the bus has served over 1,000 people since it launched Dec. 3, reaching about 30 to 50 people on a typical day.

Members of Ahmadiyya Muslim Youth Association Canada, which has its headquarters in Toronto, partnered with the faith-based nonprofit Humanity First Canada to purchase a bus and repurpose it into a mobile shelter.

Around 900 Muslim volunteers have teamed up to run the Shelter Bus to different neighborhoods each night, offering the public hot meals, hygiene kits, warm winter clothing and the opportunity to rest or seek temporary shelter on board.

“These volunteers are really driven by the Islamic values of helping the less fortunate in society,” Shelter Bus project manager Naeem Farooqi said, noting that some of the shelter’s overnight guests described the bus as “heaven” and the volunteers as “angels.”

“Our goal is to give people anything they might need to make their situation a little more comfortable over the winter months,” he said.

Between January and June of this year, Toronto Public Health reported 57 deaths among people experiencing homelessness in the city. About 5% of those deaths were due to pneumonia.

Though Humanity First Canada is known most for its humanitarian work aiding victims of natural disasters around the globe, the project felt like a natural extension of its work, the nonprofit’s spokesperson Mubashir Khalid explained. The group’s ongoing service initiatives in the area include its annual Feed the Homeless event, its food bank and its participation in the Mosaic Interfaith Out of the Cold Program.

“We saw the need was continuously increasing,” Khalid said. “So we thought we should provide solutions locally to fill the gaps.”

The vehicle began as a transit bus before being used as a coach bus for hockey players traveling from Quebec City. Last year, the Muslim groups spent over $100,000 to retrofit the climate-controlled bus with 20 beds, a kitchenette, bathroom, a lounge, wireless internet and secure storage for belongings.

Organizers say the bus appears to be the first of its kind in the country. In London, an organization called Buses4Homeless converts decommissioned buses into community centers for people experiencing homelessness. Around Australia, the group SleepBus offers similar overnight services, and Los Angeles’ hygiene buses provide showers and toilets on wheels. 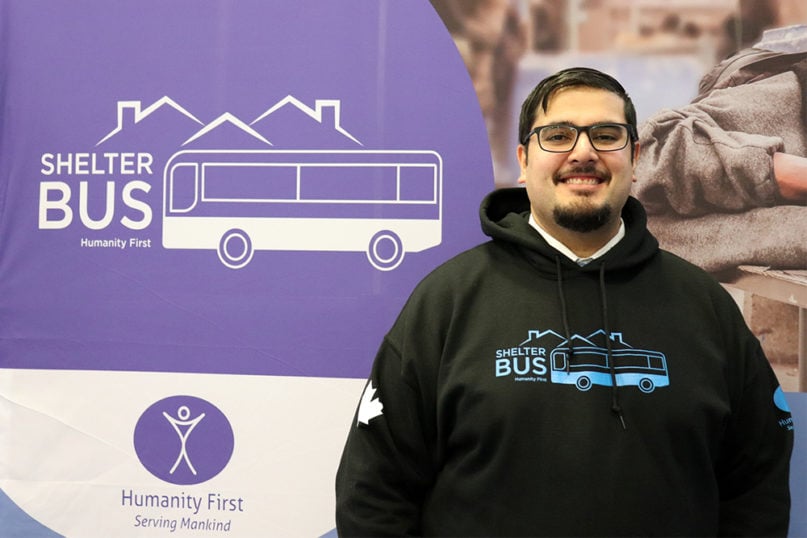 Unlike a typical shelter, buses have no permanent infrastructure or zoning issues, and their route can change from night to night to adapt to the local community’s needs, Farooqi said. Humanity First Canada is looking to work with partners around the world to roll out similar initiatives in their own communities.

The idea for the emergency shelter was sparked last year when Farooqi noticed a man in downtown Toronto holding a sign that said, “Refugees and immigrants have taken my shelter spot.”

The city’s shelter system, already perpetually overwhelmed, is struggling to keep up with the surge of refugees arriving in Toronto since 2016 as well as victims of a growing opioid epidemic. Last year, refugees and asylum claimants comprised 40 percent of users in city-administered shelters.

“That really struck me because I’ve done a lot of charity work abroad, from Africa to South America, but I haven’t really done much for my own community locally,” he said. “Charity starts at home. That got me focused on this bus concept.”

Farooqi, who works in the transit industry, had already been considering ways to repurpose the hundreds of coach buses scrapped every year in Canada.

“I was wondering if there was a more humanitarian life for all these buses that are retired for a few thousands dollars after they’ve finished their public transit use,” Farooqi told Religion News Service.

He soon pitched his plan to Humanity First. By March, the charity had purchased and refurbished its bus. During the off-season, the bus was used for food drives until temperatures dropped this winter.

Last week, the group secured its second bus. The nonprofit will soon begin fundraising to convert the interior. By next winter, it plans to have three buses driving around the city.