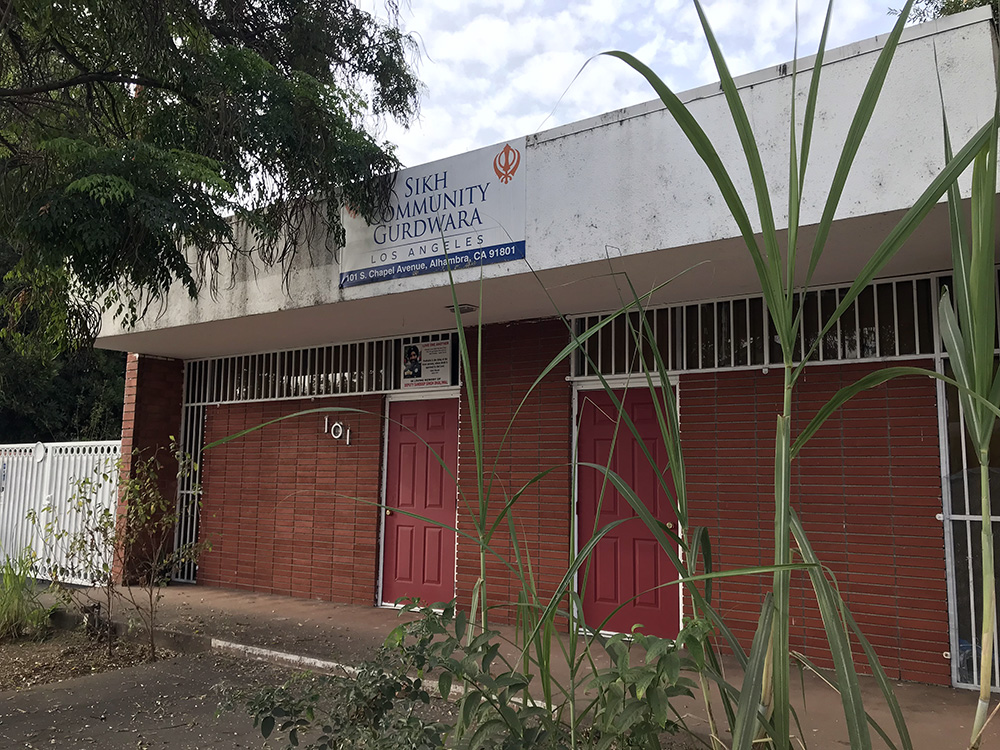 ALHAMBRA, Calif. (RNS) — Santokh Singh, president of the Sikh Community Gurdwara, was relieved when the city’s Planning Commission voted to take steps to revoke permits it initially approved for the building of a four-story commercial and residential condominium complex that would replace the gurdwara.

But within a few days, property owner Herald Lau — who is behind the planned condo project — sent Singh a 30-day notice to move out of the Sikh Community Gurdwara. Singh said he has sought to purchase the gurdwara space, currently being rented from Lau for $4,750 a month.

“We all (thought) we were safe,” said Singh.

Lau said sending the notice to move out is within his rights as a property owner. He plans to continue with his condo plans, which he said gurdwara members were aware of early in the process.

But Singh and others in the gurdwara tell a different story, which has led Planning Commission members to reevaluate their approval of a project that would force the relocation of a faith community in the San Gabriel Valley.

Tensions between the city, Lau and the Sikhs have been ongoing for months.

The commission held a hearing Dec. 2 after Sikh members of the gurdwara and their advocates argued they didn’t get enough notice of the developer’s plans.

As previously reported by Religion News Service, Sikh worshippers said the only notice they received about the condo plans was taped on a nearby tree. By the time they saw that note, the Planning Commission had already approved the project at a June 17 meeting, they said.

The city said it adhered to code when it posted about the development’s June public hearing notice on the parkway tree. It also published a legal public notice in the local newspaper. Sikh community members in Alhambra said the only official word they got about plans to demolish their gurdwara was through a note taped to a nearby tree. RNS photo by Alejandra Molina

At the December hearing, the Alhambra Planning Commission voted 5-4 to declare that its initial permit approvals for the project were obtained by fraud. That declaration opened the possibility of the agency revoking the permits authorizing the developer to proceed with the 28-unit mixed use condo complex, which would involve razing the gurdwara.

The fraud claim was spurred after some commission members said they were under the impression Sikh members no longer worshipped at the site.

A city staff report for the June meeting — in which the Planning Commission approved the project — described the Sikh temple as vacant and government records show that during the meeting some commission members were unsure whether the Sikh community still occupied the site. However, Lau was at that meeting and told the commission the gurdwara “was still operating there."

The Sikh temple says it has a membership of about 300 and recent gatherings show a thriving community there, such as a celebration for the festival of lights that brought a large crowd in late October. The Sikh Community Gurdwara also helps feed the homeless.

Lau has maintained he has done nothing wrong.

"The city made a mistake and they put it on my account," Lau told RNS. 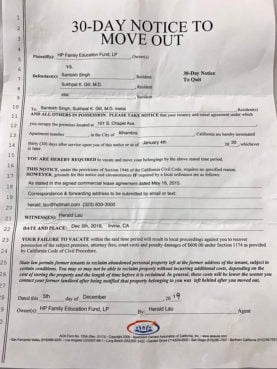 Santokh Singh, president of the Sikh Community Gurdwara, received this notice to vacate the worship site in 30 days. Courtesy photo by Santokh Singh

However, the eviction notice the gurdwara received from Lau appears to be a tenant-landlord issue that is outside of the city's hands. The city has been unable to be reached for comment on the landlord's notice.

According to Linda Paquette, an attorney who worships at the gurdwara, the gurdwara plans to fight the notice that she said is a form of retaliation for what happened at the Planning Commission meeting.

The Sikh Community Gurdwara has a long and complicated history, as recapped by Singh.

Sikh worshippers say they have been gathering at the site since 1976. In 2005, former Sikh board members decided to sell the space to Lau and moved to the city of Walnut. However, local Sikhs wanted to continue worshipping there and decided to rent from Lau soon after the sale. Then, in 2015, the gurdwara leader at the time decided to move the congregation to Rosemead without giving worshippers proper notice of the changes.

That’s when Singh stepped in and committed to a one-year lease with Lau in order to reopen the gurdwara for the congregants who wanted to remain there. City documents corroborate the 2015 lease between Lau and Singh. After the one-year lease, Singh said, he chose to go on a month-to-month lease because rent would be cheaper that way. A copy of the lease agreement provided to the city shows that a one-year lease would have resulted in $250 more a month.

Singh said the gurdwara will not move. It would be unfair to do so, he said.

"I have no other place to keep my people," Singh said.