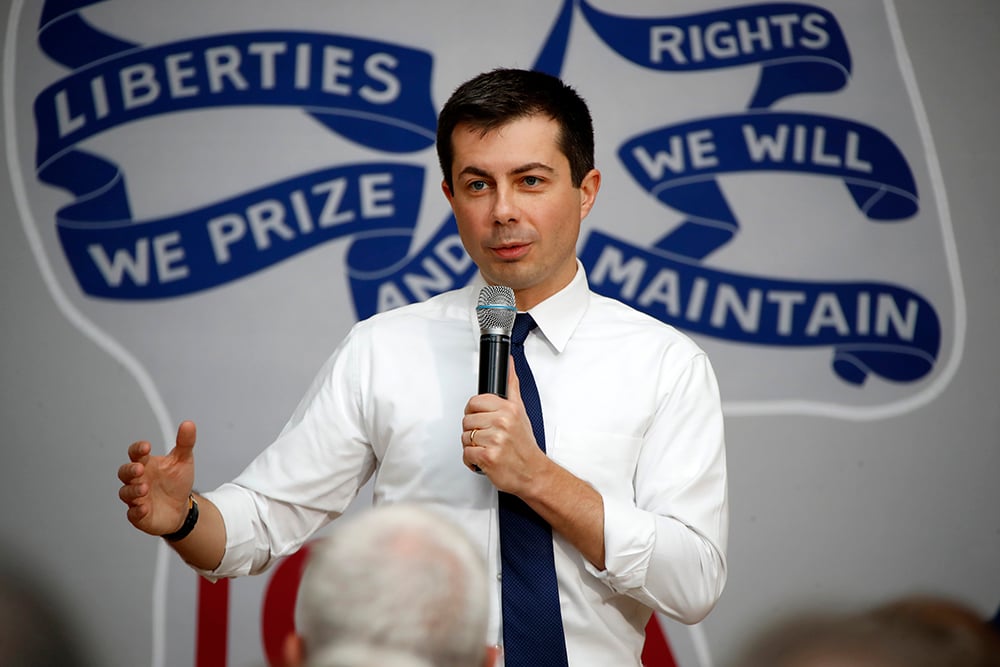 (RNS) — Former Mayor Pete Buttigieg told a Jewish publication he would dedicate $1 billion to fighting anti-Semitism — a clear sign the presidential candidate from Indiana is continuing to court Jewish voters.

“My administration will devote $1 billion to prevent and combat radicalization and violent extremism,” Buttigieg said in the article, in which he responded to five questions put to him by the Jewish Telegraphic Agency, or JTA. “We will empower law enforcement by increasing the FBI’s domestic counterterrorism field staff and pass federal legislation to expand our ability to track hate.”

The Democratic candidate's statement comes amid a rising tide of violent anti-Semitism and ahead of of International Holocaust Remembrance Day, which falls on Monday (Jan. 27). This year’s remembrance day also marks the 75th anniversary of the liberation of Auschwitz.

Israel is marking the event with a large gathering at the Yad Vashem Holocaust memorial in Jerusalem, attended by dozens of world leaders, including Vice President Mike Pence.

In the Q&A, Buttigieg said that as president he would authorize new funding for teaching children about the Holocaust.

RELATED: Poll: What do Americans know about the Holocaust? Some, not much

He said he would also direct the Department of Justice to make prosecuting hate crimes a departmental priority and provide grants through the Department of Homeland Security to better secure and protect Jewish institutions.

Five Jews were stabbed at a rabbi’s home during a Hanukkah celebration in December, and weeks earlier a pair of attackers killed three people at a kosher supermarket in nearby Jersey City, New Jersey. The mounting violence follows the 2018 Pittsburgh shooting at Tree of Life synagogue that killed 11 Jews.

Buttigieg, an Episcopalian who has spoken at length about his faith and has worked to articulate an alternative vision of morality to that of the Christian right, has not hesitated to reach out to religious people and religious coalitions. In December, he sought out African American church worshippers when he appeared at the Rev. William J. Barber’s Greenleaf Christian Church in Goldsboro, North Carolina.

Buttigieg took direct aim at President Donald Trump in his comments to JTA, saying he has “refused to condemn white nationalists, brought individuals holding anti-Semitic views into his administration, and unapologetically employed anti-Semitic tropes himself.”

This is not the first time Buttigieg has reached out to the Jewish community. In October he spoke to the annual meeting of the liberal Jewish advocacy group J Street, alongside several other Democratic presidential candidates.

Buttigieg received a warm welcome at the conference for supporting a two-state solution to the Israeli-Palestinian conflict and for taking a tough stand against Israel’s threatened annexation of the West Bank.

American Jews tend to vote Democratic, and many lean liberal when it comes to Israel policy. Sen. Bernie Sanders was the clear favorite of some at the conference. But Buttigieg came close.

In the JTA Q&A, Buttigieg said that he disagreed with the boycott, divestment and sanctions movement against Israel but that efforts to counter BDS must respect freedom of speech and expression.

He also said that he and his husband have participated in Shabbat services back home in South Bend, Indiana, and that he was a guest at a Passover seder this past year in New Hampshire.