(RNS) — Each week Religion News Service presents a gallery of photos of religious expression around the world. This week’s gallery includes Orthodox Epiphany around the world, Holocaust anniversary commemorations, and more. Men swim in the icy waters of the Drina River in Visegrad, Bosnia, Sunday, Jan. 19, 2020, competing to reach a wooden cross. Serbian Orthodox Church followers plunged into icy rivers and ponds across the country to mark the upcoming Epiphany, cleansing themselves with water deemed holy for the day. (AP Photo) 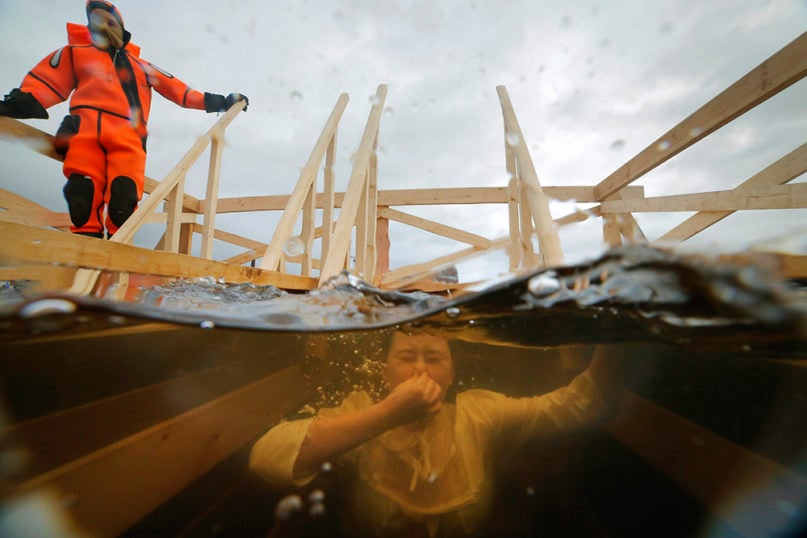 A rescue worker stands by as a Russian Orthodox believer dips into the icy water in the Neva River during a traditional Epiphany celebration in St. Petersburg, Russia, Sunday, Jan. 19, 2020. Thousands of Russian Orthodox Church followers plunged into icy rivers and ponds across the country to mark Epiphany, cleansing themselves with water deemed holy for the day. (AP Photo/Dmitri Lovetsky) 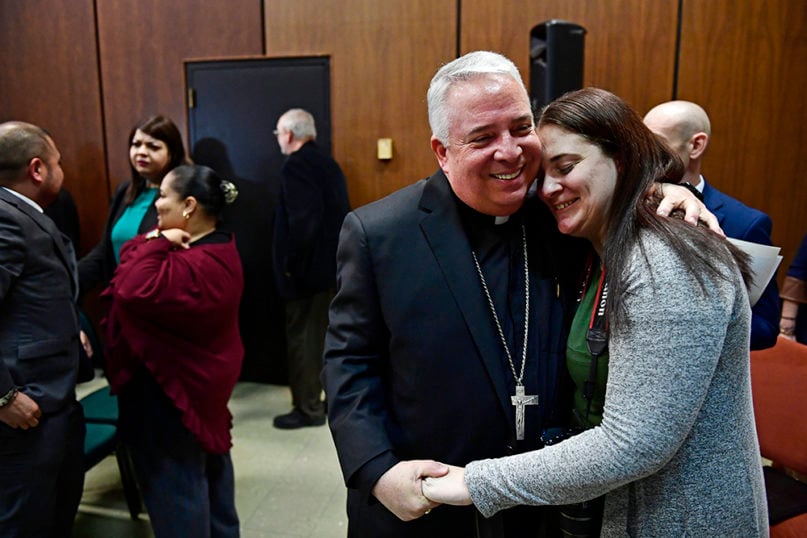 Archbishop-elect Nelson Perez hugs Sarah Webb, a photographer for Catholic Philly, an online publication for the archdiocese, at a news conference, Thursday, Jan. 23, 2020, at the Archdiocesan Pastoral Center in Philadelphia. Perez, the bishop of Cleveland, was introduced as the new leader of the Archdiocese of Philadelphia, making him the first Hispanic archbishop to lead the region’s 1.3 million-member flock. (AP Photo/Corey Perrine) 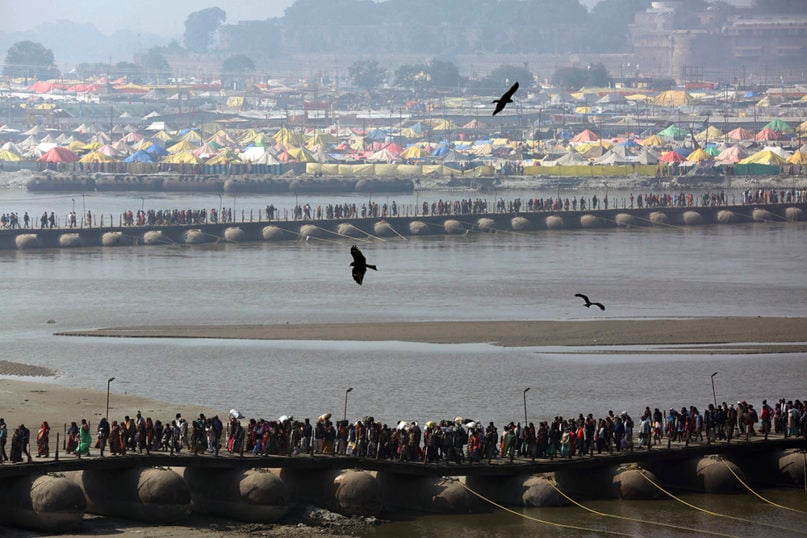 Indian Hindu devotees arrive at the Sangam, the confluence of the Ganges, Yamuna and mythical Saraswati rivers, in Prayagraj, India, Thursday, Jan. 23, 2020, the eve of the ‘Mauni Amavasya’ or new moon day, the third and the most auspicious day for bathing during the annual month-long Hindu religious fair “Magh Mela.” Hundreds of thousands of Hindu pilgrims take ritual dips in the confluence, hoping to wash away sins. (AP Photo/Rajesh Kumar Singh) 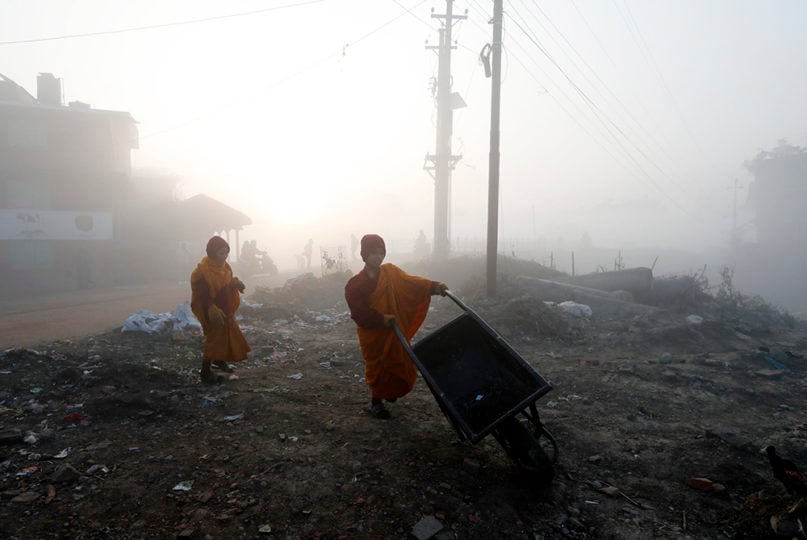 A novice Nepalese Buddhist monk pushes a cart after disposing garbage from a monastery in Bhaktapur, Nepal, on Jan. 15, 2020. (AP Photo/Niranjan Shrestha) Christians from the Ethiopian Orthodox church celebrate the annual festival of Timkat, or Epiphany, marking the baptism of Jesus Christ in the River Jordan, in the capital Addis Ababa, Ethiopia, Monday, Jan. 20, 2020. (AP Photo) 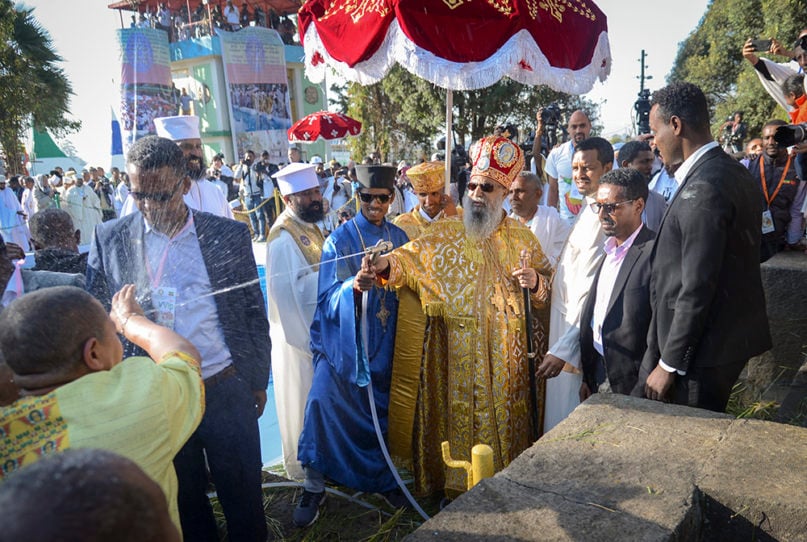 Patriarch of the Ethiopian Orthodox Church, Abune Mathias, sprays holy water on Christians as they celebrate the annual festival of Timkat, or Epiphany, marking the baptism of Jesus Christ in the River Jordan, in the capital Addis Ababa, Ethiopia, Monday, Jan. 20, 2020. (AP Photo) 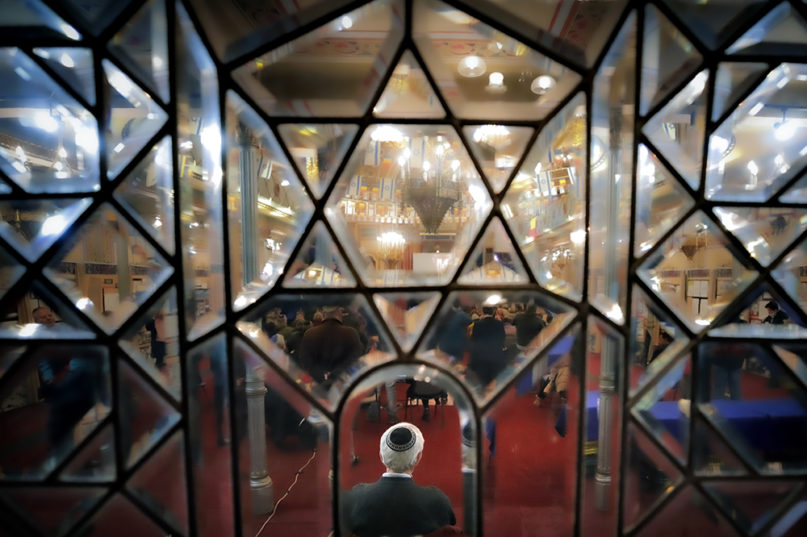 People attend a commemoration service at the Great Synagogue in Bucharest, Romania, Tuesday, Jan. 21, 2020, for those killed 79 years ago in the Romanian capital during a revolt led by members of the Iron Guard fascist party that took place Jan. 21-23, 1941. About 6,000 Jews live in Romania today, down from 800,000 before World War II, according to government statistics. (AP Photo/Vadim Ghirda) 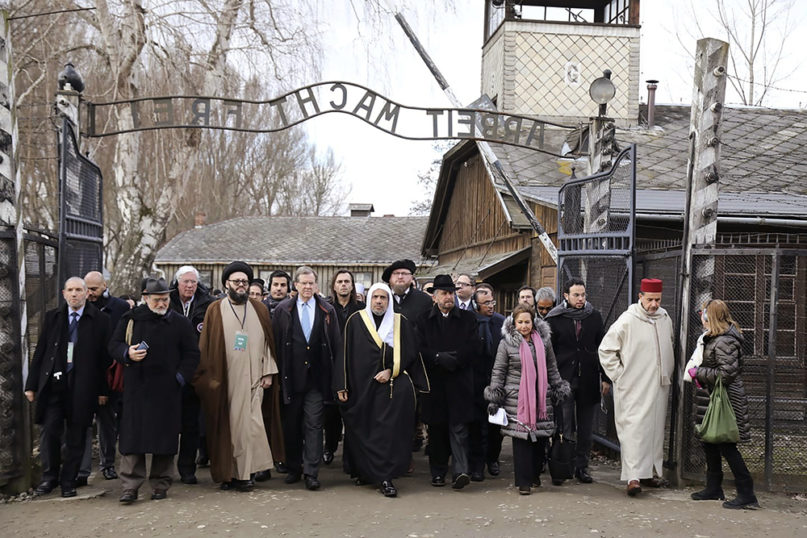 A delegation of Muslim religious leaders at the gate leading to the former Nazi German death camp of Auschwitz, together with a Jewish group in what organizers called “the most senior Islamic leadership delegation” to visit the former Nazi death camp, in Oswiecim, Poland on Thursday Jan. 23, 2020. The interfaith visit comes on International Holocaust Remembrance Day, just days before the 75th anniversary of the Jan. 27, 1945, liberation of the death camp by Soviet forces. (American Jewish Committee via AP)