(RNS) — A DC-8 aircraft carrying an emergency field hospital and a team of 32 technicians and medical personnel took off from Greensboro, North Carolina, on Tuesday (March 17) for Cremona, Italy, to set up a triage operation outside a hospital there.

The massive shipment is a donation from Samaritan’s Purse, the evangelical humanitarian relief organization headed by Franklin Graham, who is also CEO of the Billy Graham Evangelistic Association. When assembled, the modular, tentlike field hospital will help Italian medical staff, whose local medical infrastructure has been overwhelmed with a coronavirus outbreak that has killed more than 2,500 people.

The donation represents one of the largest faith-based responses to the COVID-19 outbreak. In America, many U.S.-based religious groups are working on a smaller scale to provide resources to congregations wanting to help vulnerable people cope with quarantine or social distancing.

“Their hospital (in Cremona) is still functional, but it’s overrun and overwhelmed,” said Kaitlyn Lahm, a spokesperson for Samaritan’s Purse. “So we’re setting up our emergency field hospital adjacent to an existing hospital so we can provide surge capacity.”

It will take a team about three days to set up the 68-bed hospital, hook into the water system and electrical grid and assemble the medical equipment, said Melanie Wubs, medical response coordinator for Samaritan’s Purse. Once completed, it will have a laboratory and a respiratory care unit with beds outfitted with ventilators.

In all, Samaritan’s Purse expects to have a staff of 60 technicians, doctors, nurses and pharmacists. 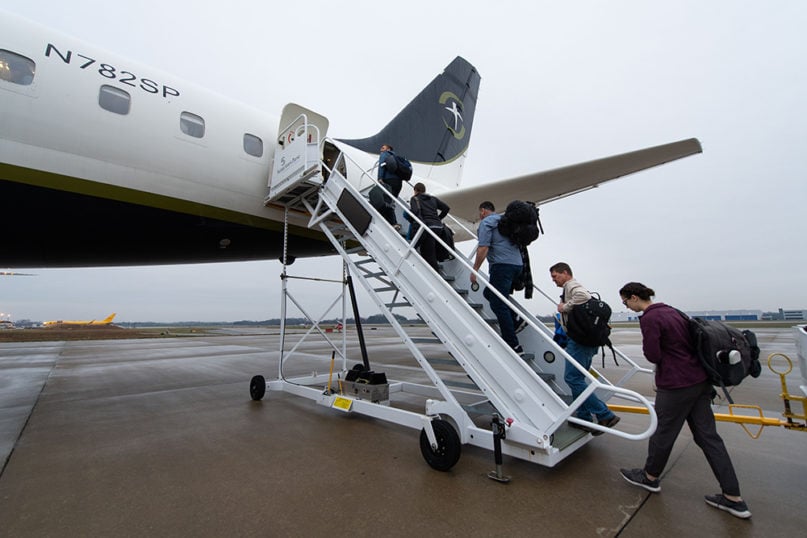 On March 17, 2020, Samaritan’s Purse airlifted a 68-bed emergency field hospital and 32 disaster response specialists, including respiratory therapists, doctors and nurses, to aid those affected by the coronavirus in northern Italy. Photo courtesy of Samaritan’s Purse

But the main purpose of the field hospital is to serve as an overflow center for people needing emergency care in Italy’s hardest-hit Lombardy region. Italy is second only to China in the number of coronavirus infections. The country of 60 million people is under a tight lockdown, with shops and churches shuttered and restrictions on gatherings.

This is not the first time Samaritan’s Purse has assembled an emergency field hospital. The organization, known for its “shoebox ministry” that sends Christmastime packages filled with personal care items and small toys to needy children all over the world, is equally well known for its disaster relief efforts.

Lahm said Samaritan’s Purse was working closely with the Italian government and its public health ministry. “We are talking to the key players on the ground to make sure this is something they need and want,” she said.

Other religious groups are also galvanizing to provide help. 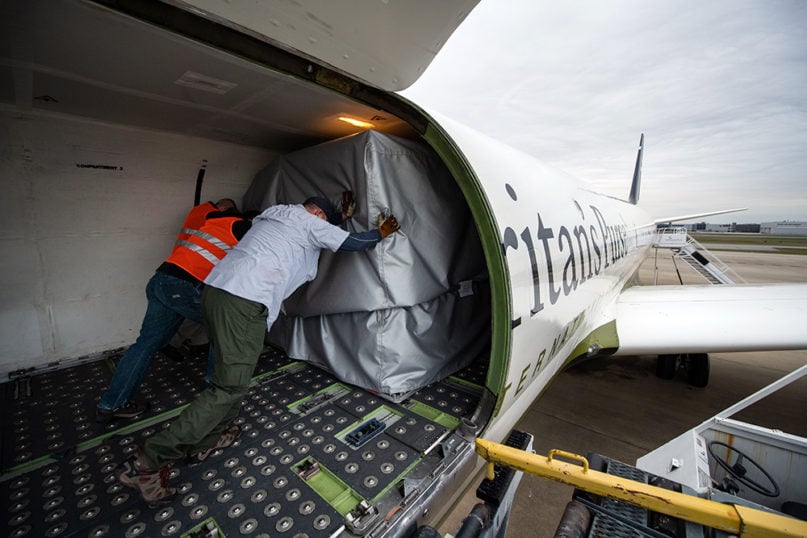 More than 20 tons of medical equipment are loaded onto the Samaritan’s Purse DC-8 cargo plane to be sent to northern Italy on March 17, 2020, in Greensboro, North Carolina. Equipment included a specialized respiratory care unit developed specifically in response to COVID-19, and 32 disaster response specialists, including respiratory therapists, doctors and nurses. Photo courtesy of Samaritan’s Purse

As most religious congregations in the U.S. have curtailed services or canceled them altogether, some congregations and denominations are beginning to think not only about safeguarding their own, but reaching out to help others.

Among the initial forays, nonprofit soup kitchens, such as Miriam’s Kitchen in Washington, D.C., have retooled to provide carry-out containers rather than a dining room to prevent the spread of the disease. Hillel International launched [email protected] to provide Jewish college students an opportunity for online meetups.

Southern Baptist disaster relief groups such North Carolina’s Baptists on Mission have provided resources to churches wanting to respond to the coronavirus but unsure how to go about doing it without endangering the health of church members and volunteers.

“This is a unique opportunity for us to be able to demonstrate the love and generosity of Christ,” said J.D. Greear, president of the Southern Baptist Convention and a pastor of a North Carolina megachurch, in a video message. “I would encourage you to check out what’s happening in your community.”

Baptists on Mission is collecting names of churches that have kitchens and can cook for others as well as churches that can make deliveries of canned goods to shut-ins.

“The best response is going to be helping facilitate neighbor helping neighbor,” said Richard Brunson, director of North Carolina Baptists on Mission. “It’s knowing who the people are in your community who are isolated and at higher risk, not hurting them but encouraging them and providing in a way that doesn’t risk them being infected.”