Nepalese Muslim men, wearing face masks as a precaution against COVID-19, react outside a Kashmiri mosque after they were told it is closed due to restrictions imposed by authorities on large gatherings in Kathmandu, Nepal, Friday, March 20, 2020. (AP Photo/Niranjan Shrestha)
March 20, 2020
Kit Doyle

(RNS) — Each week Religion News Service presents a gallery of photos of religious expression around the world. This week’s gallery covers the myriad religious responses to the coronavirus pandemic, including closing many houses of worship. 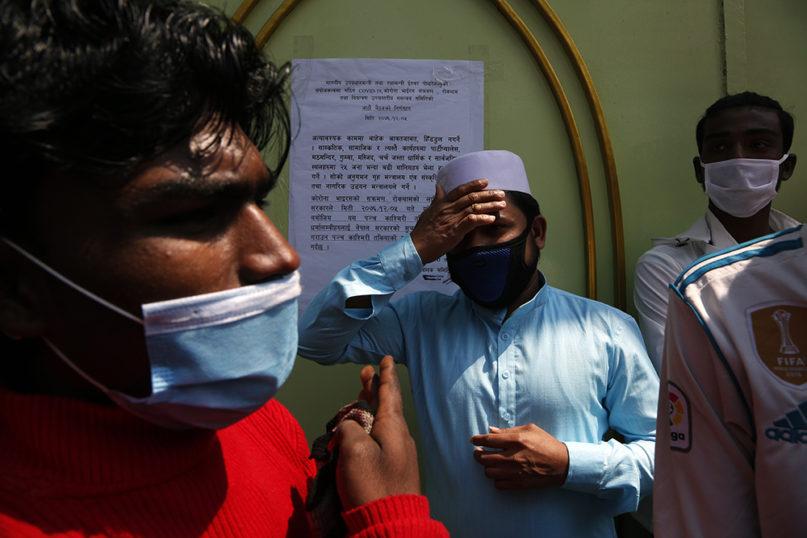 Nepalese Muslim men, wearing face masks as a precaution against COVID-19, react outside a Kashmiri mosque after they were told it is closed due to restrictions imposed by authorities on large gatherings in Kathmandu, Nepal, Friday, March 20, 2020. (AP Photo/Niranjan Shrestha) A nun wearing a mask and gloves stands at the Istituto Figlie di San Camillo (Institute of Daughters of St. Camillo) in Grottaferrata, near Rome, Friday, March 20, 2020. Outbreaks of the coronavirus have stricken two convents in the Rome area. Rome daily Il Messaggero quoted the Lazio region's health commissioner on Friday saying 59 nuns at the Institute of Daughters of St. Camillo in the hill town of Grottaferrata have tested positive for COVID-19. (Roberto Monaldo/LaPresse via AP) 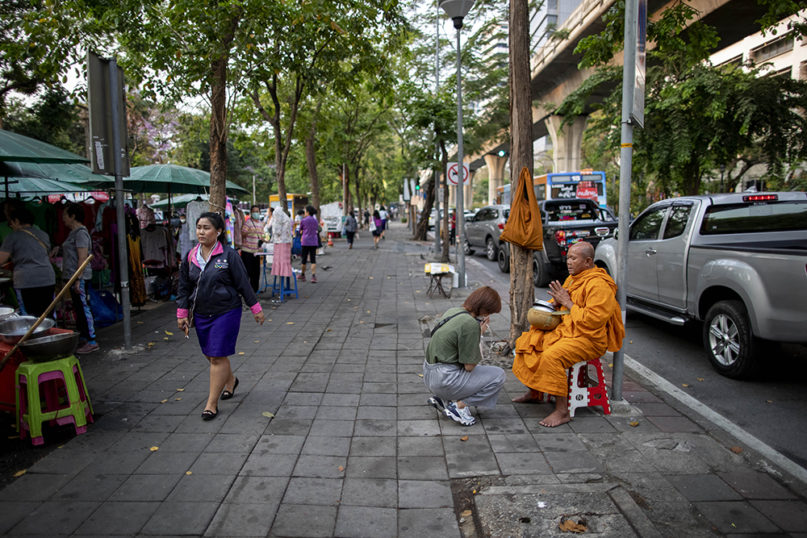 A devotee with a protective mask receives a blessing after offering alms to a Buddhist monk on a sidewalk in Bangkok, Thailand, Tuesday, March 17, 2020. (AP Photo/Gemunu Amarasinghe) 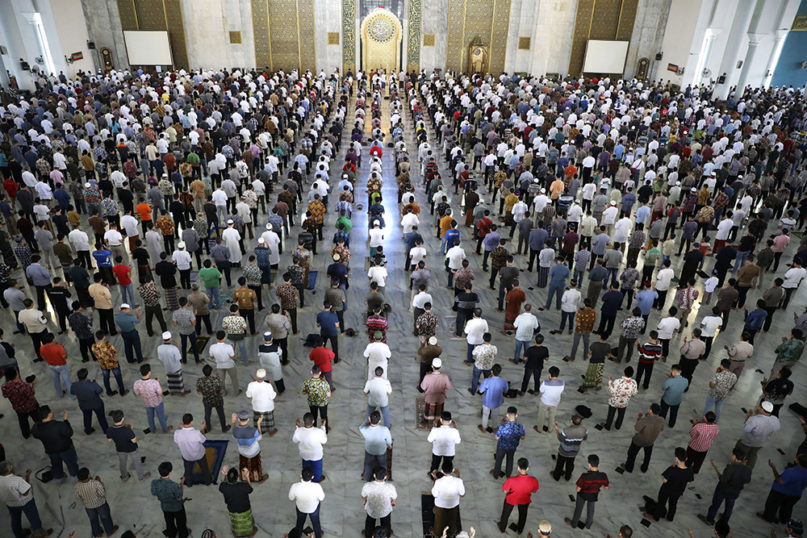 Muslim men perform Friday prayer with a space of about one meter (3 ft) between one other as a social distancing effort to prevent the spread of new coronavirus at Al Akbar mosque in Surabaya, East Java, Indonesia, Friday, March 20, 2020. (AP Photo/Trisnadi) 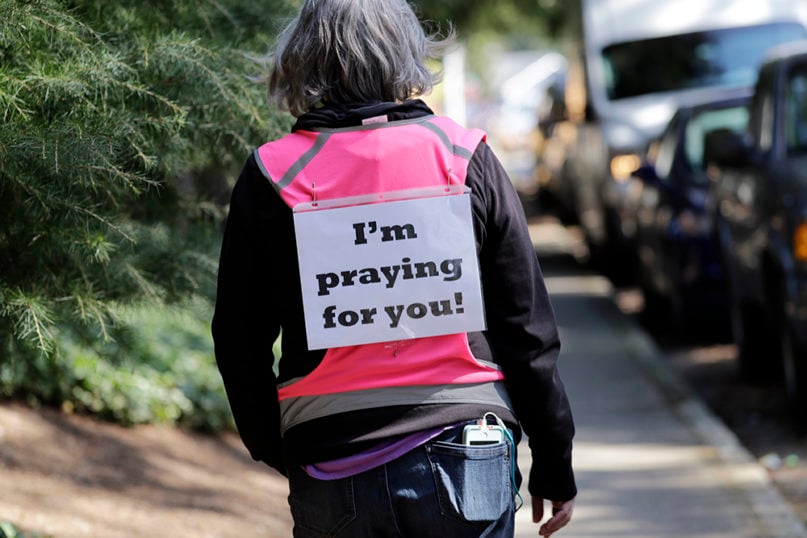 Lois Casimes wears a sign in support of residents and health care workers as she walks past the Life Care Center, Wednesday, March 18, 2020, in Kirkland, Washington. At least 30 coronavirus deaths have been linked to the facility. Casimes, from nearby Bothell, Wash., wanted to take the time to walk in the neighborhood and pray for people at the facility. Staff members who worked while sick at multiple long-term care facilities contributed to the spread of COVID-19 among vulnerable elderly in the Seattle area, federal health officials said Wednesday. (AP Photo/Elaine Thompson) From left, Andrew Klabnik, Shideya Parrilla, Savannah Sully, Fatima Corona, and Natalie Plumb pray the Rosary at the Basilica of the National Shrine of the Immaculate Conception in Washington, Monday, March, 16, 2020. Among their prayers of special intention was for all those affected by the coronavirus outbreak. The basilica has suspended the public celebration of Mass and there is no scheduled confession, but the doors are open for private prayer from 9 a.m. to 5 p.m. (AP Photo/Carolyn Kaster) 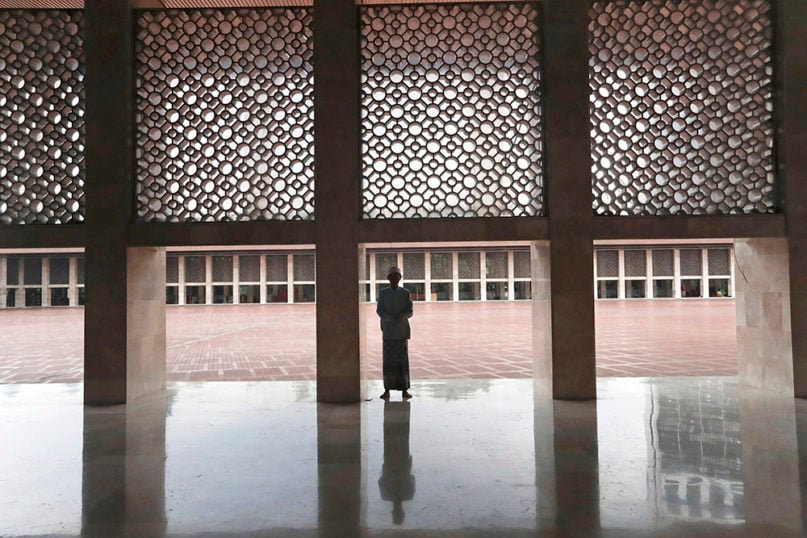 A Muslim man prays at Istiqlal Mosque in Jakarta, Indonesia, Friday, March 20, 2020. The grand mosque in Indonesia's capital decided to cancel mass prayers for the next two weeks to curb the spead of coronavirus. One of the largest mosques in Southeast Asia, it is usually packed with thousands of Muslims during Friday prayers. (AP Photo/Tatan Syuflana) 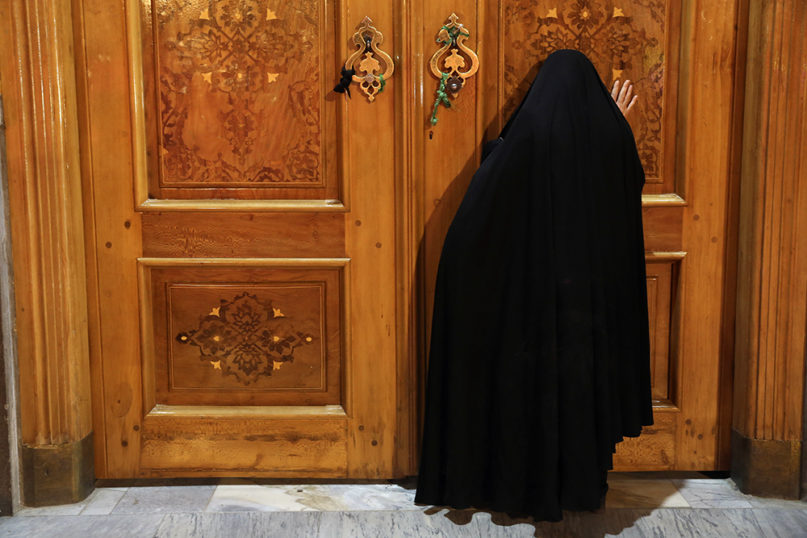 A woman prays behind a closed door of Masoume shrine in the city of Qom, the epicenter of the country's coronavirus outbreak, some 80 miles south of the capital Tehran, Iran, Monday, March 16, 2020. On Monday, Iran closed the shrine, a major pilgrimage site. Authorities were already restricting access and barring pilgrims from kissing or touching the shrine, but it had remained open until this week. (AP Photo/Str) Russian Orthodox clerics hold a service for deliverance from the coronavirus at St. Peter Monastery in Moscow, Russia, Wednesday, March 18, 2020. Russian authorities are taking sweeping measures to prevent the spread of the disease in the country. Precautions include closing the border for all foreigners, shutting down schools for three weeks, sweeping testing and urging people to stay home. (Kirill Zykov, Moscow News Agency photo via AP) Los Angeles Archbishop Jose Gomez, center, kneels and prays the rosary at the Cathedral of Our Lady of the Angels, Thursday, March 19, 2020, in Los Angeles. The prayer, which was broadcast, was done in conjunction with Pope Francis who urged Catholics to unite spiritually to pray the rosary simultaneously on the Feast of St. Joseph. While services are normally broadcast, the televising of services has become especially important since the archdiocese has had to close their doors to parishioners due to the coronavirus. (AP Photo/Mark J. Terrill)