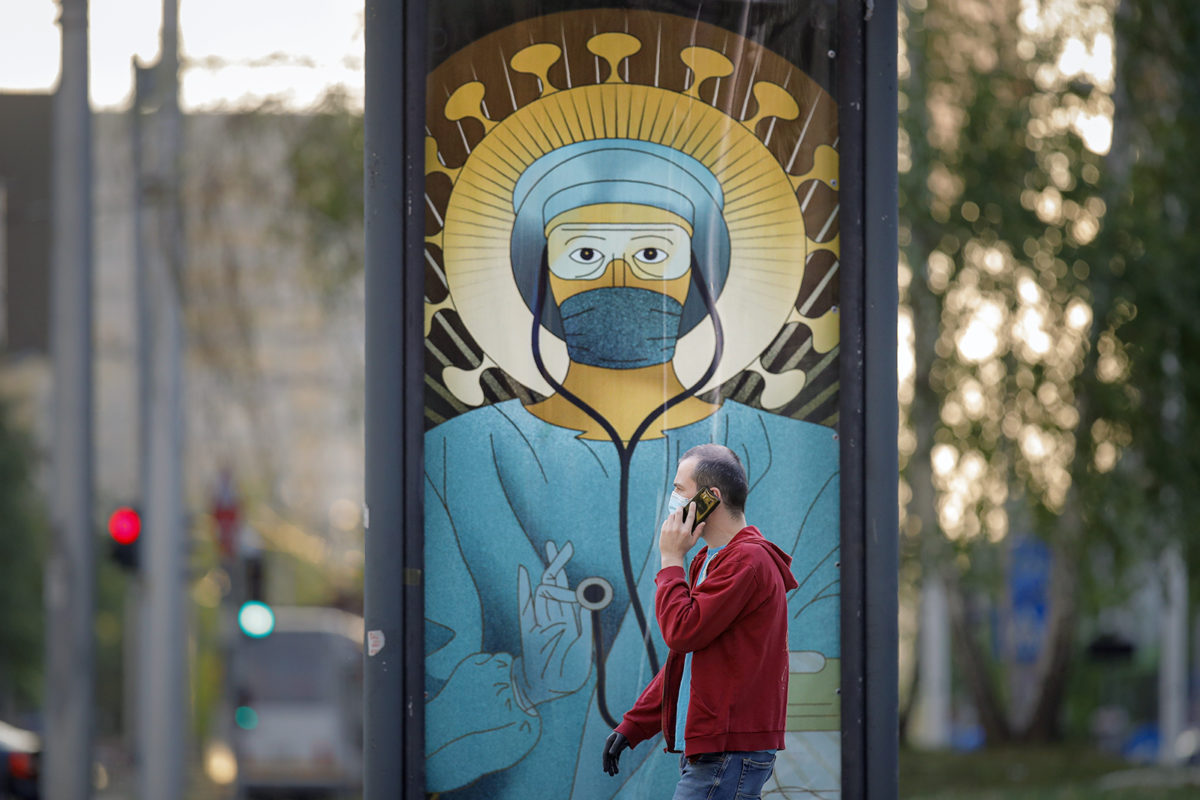 A man walks by a depiction of a medical worker wearing protective equipment, executed in the style of Christ Pantocrator, in Bucharest, Romania, Wednesday, April 29, 2020. The artwork, among others depicting medical staff in the manner of religious icons, created by designer Wanda Hutira, is part of a campaign called Thank You Doctors, meant to raise awareness to the work of medical staff fighting the COVID-19 pandemic. Following public pressure by Romania's influential Orthodox church the artworks, described as "blasphemous", will be removed from all locations in the Romanian capital, according to the agency behind the project.(AP Photo/Vadim Ghirda)
May 2, 2020
Kit Doyle

(RNS) — Each week Religion News Service presents a gallery of photos of religious expression around the world. This week’s selection includes the 75th anniversary of the liberation of Dachau, differences in Ramadan and more. A man walks by a depiction of a medical worker in protective equipment as Christ Pantocrator, in Bucharest, Romania, Wednesday, April 29, 2020. The artwork, among others depicting medical staff in the style of religious icons, was created by designer Wanda Hutira, as part of a campaign called Thank You Doctors, meant to raise awareness to the work of medical staff fighting the COVID-19 pandemic. Following public pressure by Romania's Orthodox church, the artworks, described as "blasphemous," will be removed from all locations in the Romanian capital, according to the agency behind the project.(AP Photo/Vadim Ghirda) 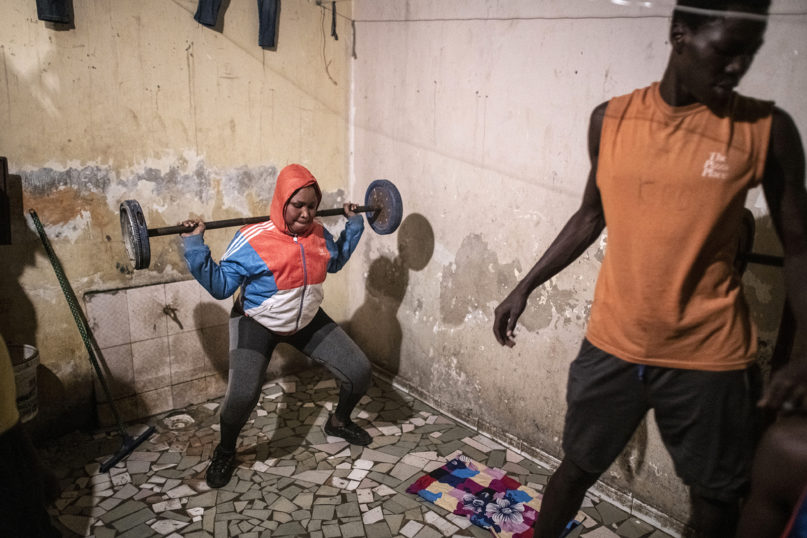 The family of Bara Tambedou exercises at home after breaking their fast on the first day of the Muslim holy month of Ramadan, in Dakar, Senegal, Saturday, April 25, 2020. With prohibitions on public gatherings and a dusk-to-dawn curfew in place to curb the spread of the new coronavirus, the family is celebrating Ramadan this year at home. (AP Photo/Sylvain Cherkaoui) 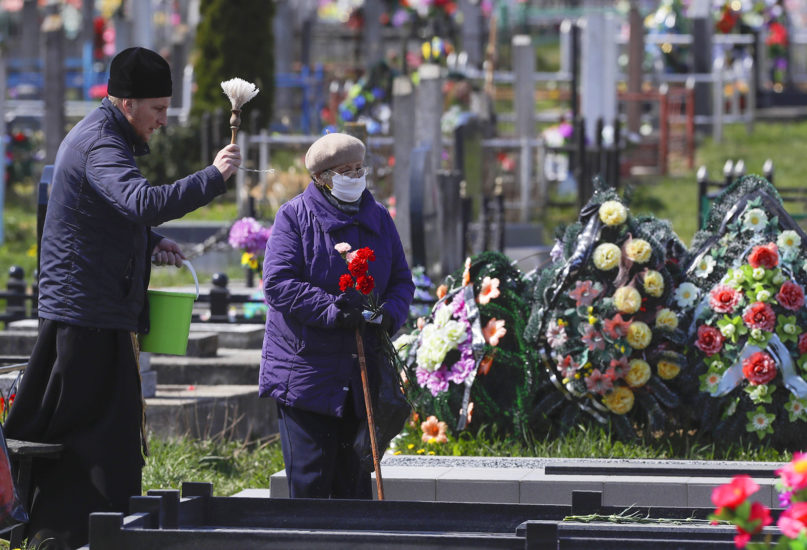 An Orthodox priest blesses graves during a traditional Orthodox Christian ceremony in the town of Novogrudok, 90 miles west of Minsk, Belarus, Tuesday, April 28, 2020. Tuesday marked celebrations of the church holiday "Radunitsa,” a day of remembrance for the dead, on the ninth day after Orthodox Easter. Some people wore face masks to protect against coronavirus, although Belarus' president has dismissed concerns about the coronavirus despite a sharp rise in infections. (AP Photo/Sergei Grits) 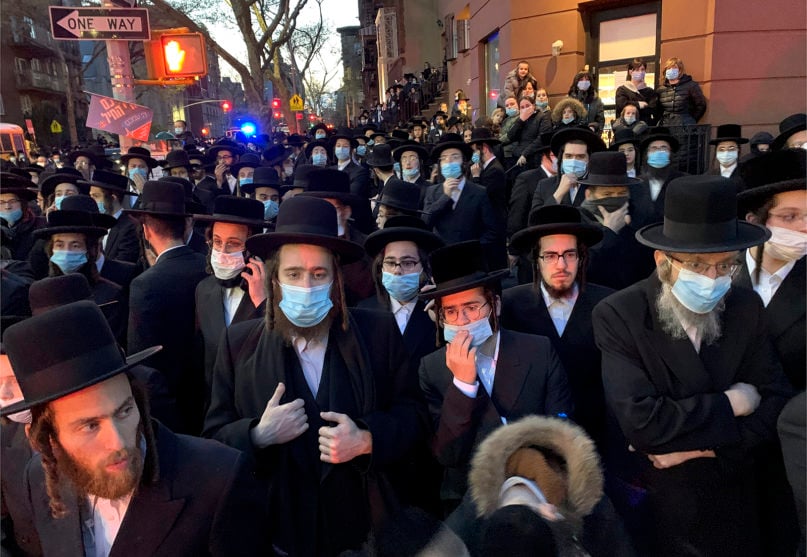 Hundreds of mourners gather in the Brooklyn, New York, Tuesday, April 28, 2020, for a funeral for Rabbi Chaim Mertz, a Hasidic Orthodox leader whose death was reportedly tied to the coronavirus. The stress of the coronavirus' toll on New York City's Orthodox Jews was brought to the fore on Wednesday after Mayor Bill de Blasio chastised "the Jewish community" following the breakup of the large gathering, which flouted public health orders.(Peter Gerber via AP) 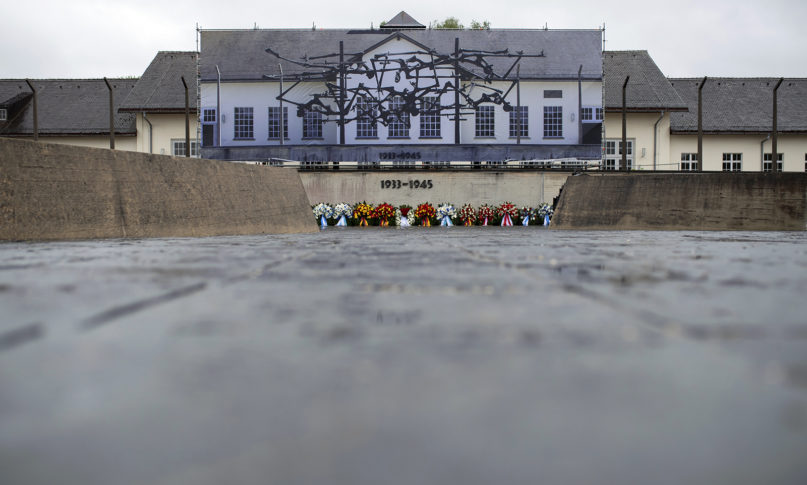 Wreaths line a wall at the International Memorial at the Dachau Nazi death camp after a ceremony on the occasion of the 75th anniversary of the camp's liberation, in Dachau, Germany, Wednesday, April 29, 2020. U.S. soldiers liberated more than 30,000 people imprisoned at the camp on April 19, 1945. The Dachau museum estimates that more than 41,500 individuals were killed at Dachau. Among many other groups, the camp imprisoned Jews, Jehovah's Witnesses, and Catholic priests. (Sven Hoppe/dpa via AP) 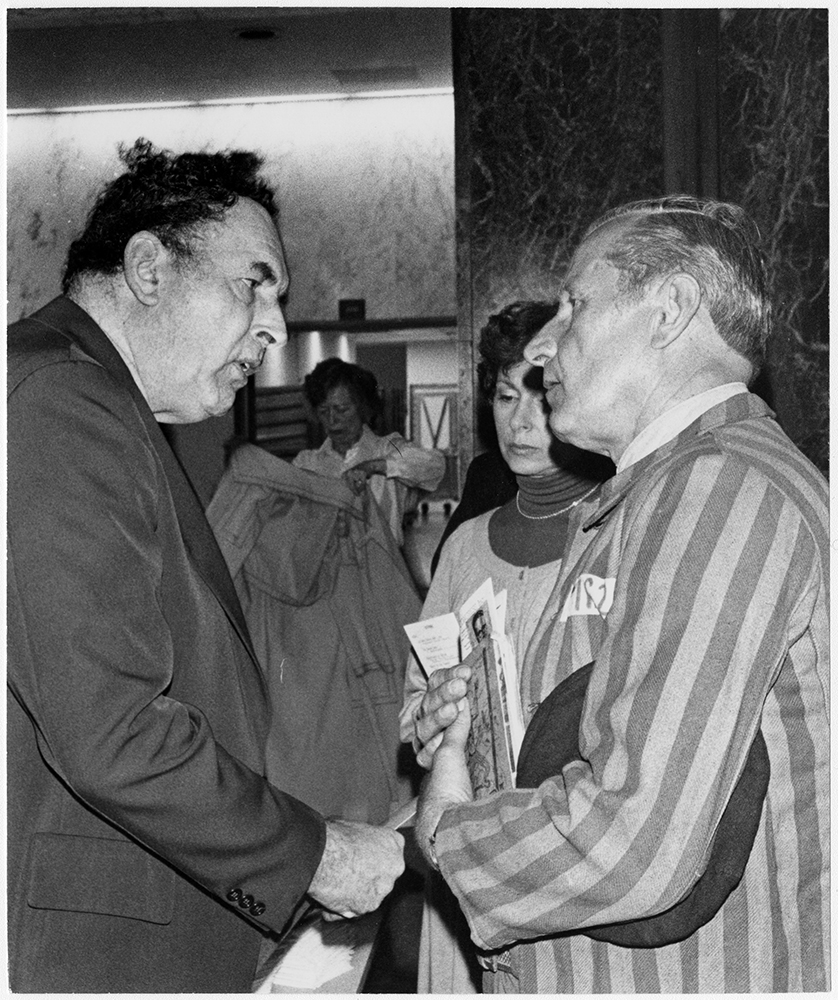 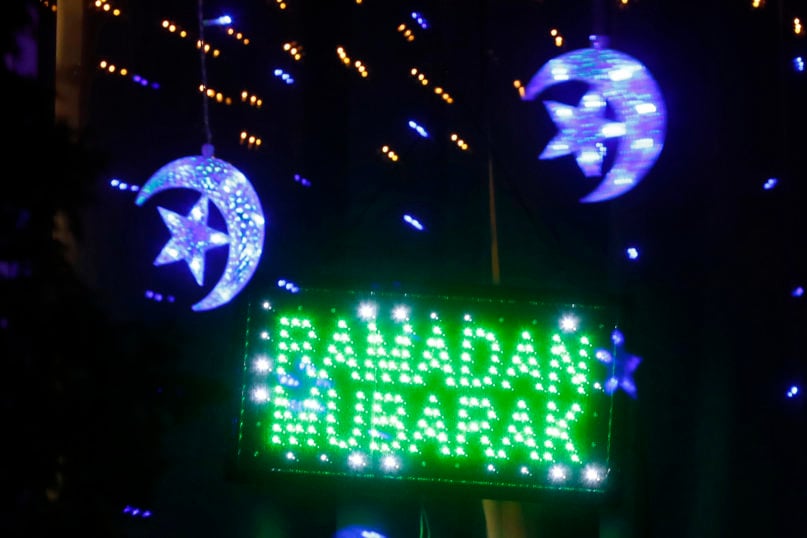 In this Tuesday, April 28, 2020 photo, Ramadan lights are displayed on a house in Dearborn, Michigan. The Muslim community in Dearborn is starting a new tradition this year in hosting a Ramadan lights competition in hopes of spreading joy and bringing back some of the holiday spirit during the coronavirus pandemic. (AP Photo/Carlos Osorio) 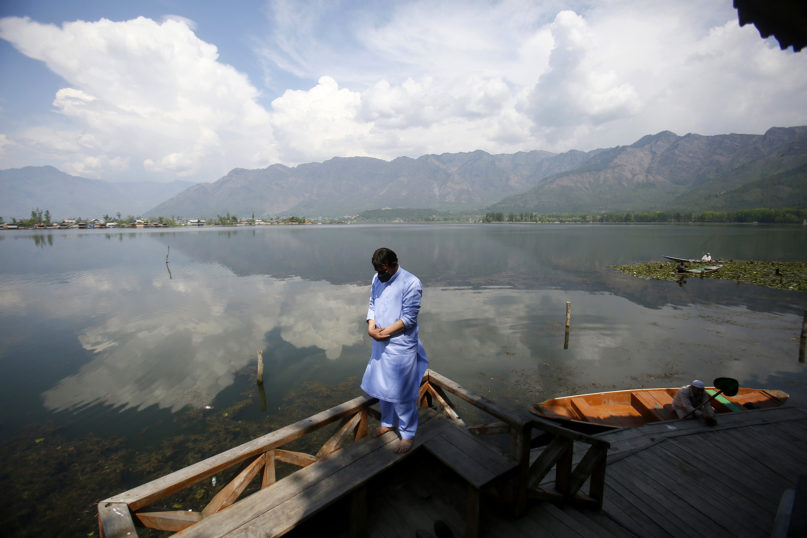 A Kashmiri Muslim man prays on the banks of Dal Lake during lockdown to prevent the spread of the new coronavirus in Srinagar, Indian controlled Kashmir, Sunday, April 26, 2020. Kashmiri shrines usually packed with devotees during the holy month of Ramadan had a deserted look Sunday as authorities closed the shrines for the safety of the public. (AP Photo/Mukhtar Khan) People line up for free food in the Bay Ridge neighborhood of Brooklyn, New York, on Thursday, April 30, 2020. Various community groups including Muslims Giving Back (in red vests on left) and Gyro King have started serving halal hot meals to help Muslims observing the holy month of Ramadan break their fasts. Four mobile food trucks are providing this service around New York City as part of efforts to help those affected by the economic contraction caused by the spread of the coronavirus. This service will serve approximately 1,000 meals a day during Ramadan. (AP Photo/Wong Maye-E) 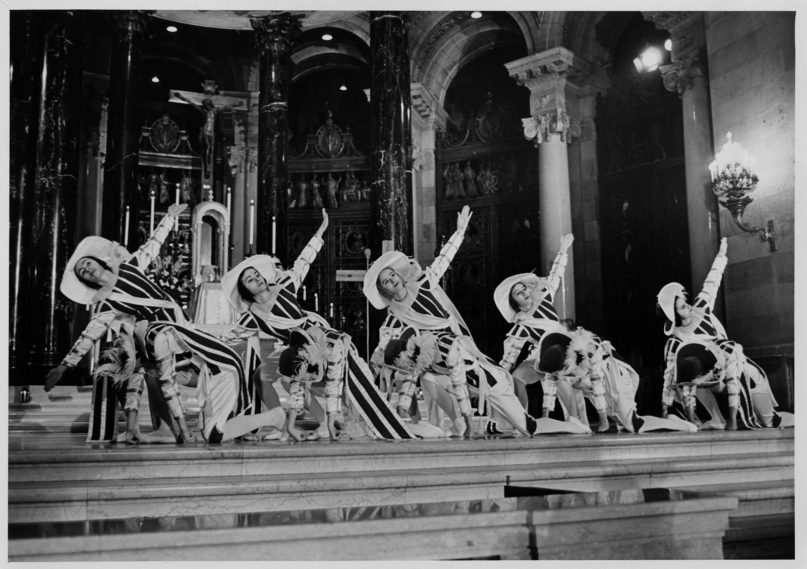 Dancers from the Andahazy Ballet Borealis Company of Minnesota dance before the altar of the Cathedral of St. Paul, as they perform a medieval Spanish religious ceremonial, "Los Seises" or "The Sixes," for television cameras, in June 1965. Reportedly originating in the Cathedral of Seville, in Spain, the ballet has been performed there since the late 15th century on the Feast of Corpus Christi, and later, on the Feast of the Immaculate Conception. RNS archive photo. Photo courtesy of the Presbyterian Historical Society