(RNS) — They are words the Rev. John Witvliet, an expert on Christian worship, never thought he would hear himself say.

“Based on the science that we are learning about this week, we are urging and I am personally urging extreme caution,” said Witvliet, director of the Calvin Institute of Christian Worship in Grand Rapids, Michigan, in a Wednesday (May 13) interview.

“Singing together in congregations is a practice that we dearly love and are eager to promote, but loving our neighbor is job one here and so the time for fasting from this wonderful practice may be longer than any of us would like.”

His unprecedented words of warning come as religious leaders have received jarring predictions from scientists well-versed in virology as well as vocal practices. Webinars, videos and texts are circulating across the globe as scientists reveal their studies, and clergy must consider what to do with the results of those reports. Some church leaders aren’t yet sure what to do when they reopen, others are designing multiphase plans, and still others are moving ahead with their traditional practices of praise. But, more than halfway across the country, Dr. Howard Leibrand, public health officer for Skagit County, Washington, appears to be in Witvliet’s amen corner.

“I would recommend that until we get a vaccine, we don’t do congregational singing,” he said, adding that it is “the safest recommendation.”

Leibrand was one of the investigators of the coronavirus outbreak that spread through a local chorale that had been meeting in a Presbyterian church. He is an author of a report published by the Centers for Disease Control and Prevention that tracked the 61 people who attended the March 10 rehearsal with one symptomatic person. The report found that 87% of the group was confirmed to have COVID-19. Three members were hospitalized, and two of them died.

The report noted that, in addition to sitting next to each other, snack sharing, and stacking chairs after the rehearsal, the singing by chorale members could have led to infection via the transmitting of droplets.

“The act of singing, itself, might have contributed to transmission through emission of aerosols, which is affected by loudness of vocalization,” it says.

Leibrand, a congregational singer and a member of a nondenominational church that meets in homes, said that even though the chorale was not specifically a church choir, “I think it has some cross-utility for making predictions about what would happen in a church choir, too.”

When the Rev. Leslie Callahan of Philadelphia’s St. Paul’s Church met via Zoom with her deacons on Tuesday, one of the top concerns they discussed was whether there would be singing when they reopen. She had read articles, including about the infected chorale. She had also viewed the much-shared webinar hosted by singing associations where an otolaryngologist posited that it could be 18 to 24 months before group singing makes scientific sense. 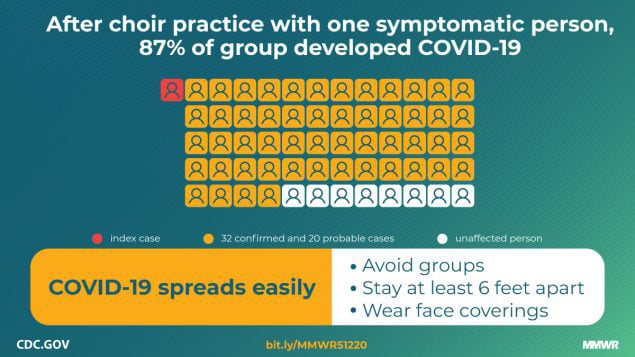 A graphic about the choir practice that resulted in a COVID-19 outbreak in Skagit County, Washington, in March. Courtesy of the CDC

“It doesn’t sound like singing is safe, especially not congregational singing, which is from my perspective a really important feature of worship,” Callahan said. “Singing together is a big deal. In fact, not having a handle on this may make me postpone when we start to worship together again.”

Her historic, predominantly black church, which draws a congregation of 150 to 175 people — some of whom are at special risk — on a regular Sunday, is located in a part of Pennsylvania that remains in the red phase, under a shelter-in-place order through at least June 4.

Callahan, whose church is dually aligned with American Baptist Churches in the U.S.A. and Progressive National Baptist Convention, said she has wondered about the possibility of teaching congregants signs or dance moves so there can be some new way to relate to familiar songs. She is also considering adding screens to the sanctuary — even before the ones planned for an upcoming renovation — that would feature prerecorded musical performances similar to those now on the church’s weekly livestream. 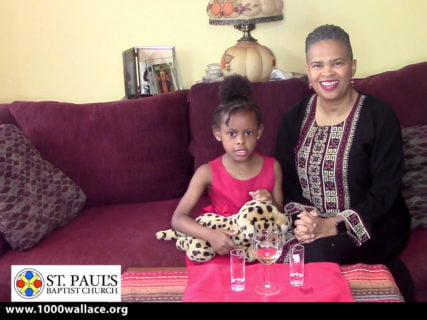 The Rev. Leslie Callahan, pastor of Philadelphia’s St. Paul’s Baptist Church, sings “O Lord, Remember Me” with her daughter, Bella, after celebrating Communion in the online worship service for May 10.

“I’m really trying to figure out what it feels like to have church where people don’t sing,” she said. “It goes against, really, the heart of my understanding of what it means for us to worship together.”

Some denominational officials have already issued advice in light of warnings from the scientific community.

Citing the information from the singing organizations and other research, the Archdiocese of Baltimore this month has declared in guidelines for future Masses that “congregational singing by the assembly is suspended until further notice. Because singing expels significantly more aerosolized particles of virus than speaking, it creates a much greater risk of spreading the virus. In particular, choirs should not rehearse or sing until further notice.”

Evangelical Lutheran Church in America Presiding Bishop Elizabeth Eaton issued a caution after a briefing with a doctor from the CDC and other National Council of Churches leaders.

“He also revealed to us that singing is right up there with coughing and sneezing in spreading this disease,” she said in a May 1 video. “So I think it’s very important for us, as different states and different governors are opening up society again, to be very careful and very deliberate in the way we go about reintroducing in-person worship.”

Hearing of Eaton’s warning and the more general notion of not singing when people regather in pews, the Rev. Boise Kimber responded that it was a nonstarter for a predominantly black church like his in New Haven, Connecticut.

“That ain’t for us,” he said, adding that singing is “part of our spiritual DNA.”

Others have done more than verbally object — they have started singing in worship again.

“We did sing, and it was glorious,” said Tom Ascol, pastor of Grace Baptist Church, a Southern Baptist congregation in Cape Coral, Florida, that met for the first time since mid-March in its sanctuary on Sunday. “We did so out of simple obedience to Christ.” 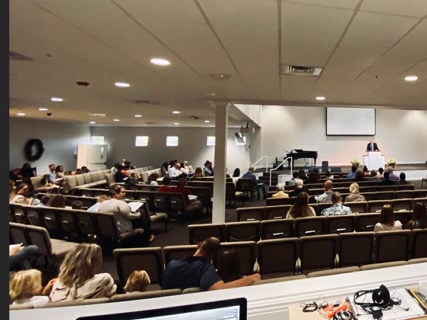 He said the multiethnic church’s service was attended by 160 people, which was a bit more than half its usual gathering. They sang six songs as they often do in their liturgy, including the traditional Charles Wesley hymn “And Can It Be” and “O Church, Arise,” a contemporary hymn by Keith and Kristyn Getty.

Ascol, who opposes online worship and has instead offered an archive of online services or drive-in services in the church parking lot, said he was disappointed in religious leaders who have taken a more cautious approach.

“The speed with which so many have acquiesced to draconian overreach of civil authorities is breathtaking and revealing,” said Ascol, president of Founders Ministries, a neo-Calvinist evangelical group with mostly Southern Baptist members, in an email to Religion News Service.

“It’s as if they have no regard for the 1st Amendment of the U.S. Constitution and, far worse, the Word of God — which instructs Christ’s church to gather regularly for worship.”

Seth O’Kegley, director of worship and music at First United Methodist Church of Oak Ridge, Tennessee, is pursuing a different strategy, as his congregation awaits word from the regional bishop about when it can open its doors again.

“As far as music goes, we are going to start with no congregational singing,” he said of the mostly white church with 400 to 450 congregants.

A group of no more than six paid professionals will sing in a more remote spot of the cross-shaped sanctuary during the traditional service, more than 16 feet away from congregants (a distance cited by two scientists in the singing organizations’ webinar for how far the virus can travel). A “pared-down band,” smaller than the usual six to eight members and spread out across a platform, will provide music for the contemporary service.

“We’re hoping this gives people that participatory experience even though we ask them not to sing along,” O’Kegley said.

The lack of regular congregational music now — as many worship online — doesn’t mean congregants aren’t singing. O’Kegley said some people stand and join in when hymns are played via their digital connections.

Witvliet, a professor of congregational studies at Calvin Theological Seminary, said members of his Christian Reformed congregation, Church of the Servant in Grand Rapids, gather around their kitchen table and sing along — and their Zoom worship service features individuals and families singing and playing instruments from their homes. However, conflicting scientific reports have made some church leaders unsure how to proceed once they reopen.

For example, two researchers at Bundeswehr University in Munich concluded, “In a choir or in the church, a safety distance of at least 1.5 m (or 4.9 feet) should still be maintained in order to protect yourself effectively against a droplet infection even if you cough unprotected.” Their study, published in German and translated via Google Translate, differs from others’ recommendations while also noting the need for staggered seating for singers and good ventilation.

“If you read all (the reports), they are all over the map,” said Philip Brunelle, organist-choirmaster at Minneapolis’ Plymouth Congregational Church and founder of VocalEssence. When it comes to congregational singing, he thinks it’s probably “better for us to wait until such time as we have a better idea about what is healthy and what is allowed.”

Brian Hehn, director of the Hymn Society’s Center for Congregational Song, is working with an ecumenical consultation to devise recommendations for worship in Catholic and Protestant congregations. He said his group’s future musical advice will likely be based on the consultation’s guidance.

Leibrand, the Washington state doctor, said he isn’t likely to meet again in person with his church members for at least the next couple of months. He expects when they do gather, they’ll be following his advice that “everybody will wear masks and we will probably sing at low volume.”

He said he’s gratified to see the global attention to the findings he and his colleagues reported.

“We did what we wanted to do here,” he said, “and that’s not to wreck everybody’s Sunday but to try and keep them safe for a few more Sundays.”