The four roommates moved into a five-bedroom, five-bath house in Los Angeles’ Koreatown neighborhood earlier this year. They come from different faiths: Baha’i, Christianity, Islam and Judaism. Cohen came from Jerusalem but had already lived in the Bay Area for a few years. Simcosky made the trek from Salem, Massachusetts, to L.A. Khan and Mansour were already in Southern California.

They live rent-free in a new interfaith experiment known as the Abrahamic House, the brainchild of 33-year-old Mohammed Al Samawi, a Muslim man from Yemen who, in his memoir, “The Fox Hunt,” wrote about the threats he endured for his interfaith advocacy.

The four roommates, known as “fellows,” maintain their day jobs but agree to live under the same roof in a co-living and co-creating space for one to two years to learn from one another’s traditions and to organize and host interfaith events and programs for the public.

Their shared mantra: “gathering not othering.”

The fellows were selected at the beginning of the year and began moving in around late February. By early March, they were establishing house rules and responsibilities. Then the coronavirus outbreak struck the country.

Now, together in lockdown, they’ve adopted new ways of virtually gathering with others while honoring each other’s rituals and traditions.

In a time of social distancing, they have had to learn to live together and how to keep each other “safe from potential death and illness,” said Khan. 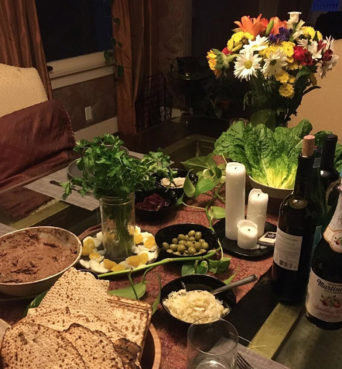 It has only been about three months, but so far things have gone well as the community celebrated Easter, Passover, Ramadan and the Baha’i celebration of Ridvan and learned to adjust to each other’s religious practices.

Just as they were moving in, Mansour, who is Baha’i, had begun fasting in preparation for the Baha’i New Year. It’s 19 days of daytime fasting that culminated just as Gov. Gavin Newsom issued statewide stay-at-home orders to help prevent the spread of COVID-19.

Every Friday, Cohen, 28, who is Jewish, practices Shabbat, a day of rest and celebration beginning Friday at sunset.

Khan, 30, who is Muslim, is currently fasting for Ramadan.

Simcosky, who described himself as a “Southern Baptist preacher’s kid,” said the Abrahamic House experience has so far been “educational and enlightening.”

“All these things are not part of the way I normally live in the world,” said Simcosky, 35, a book editor.

Simcosky said he grew up in a culture that “was very interested in converting, conquering and convincing.”

“That never really resonated with me,” said Simcosky, who now attends an Episcopal church.

“As I look at some of the conflicts we’re having in our nation, supremacy is popping up, and I feel like there’s a calling to not conquer or to convince, but to learn and to bless.”

The global pandemic has somewhat complicated this co-living situation.

With the stay-at-home orders, the group takes turns going out grocery shopping. They keep a list in the kitchen of communal food running low. They signed up for a Community Supported Agriculture subscription and receive a box of produce every Sunday. 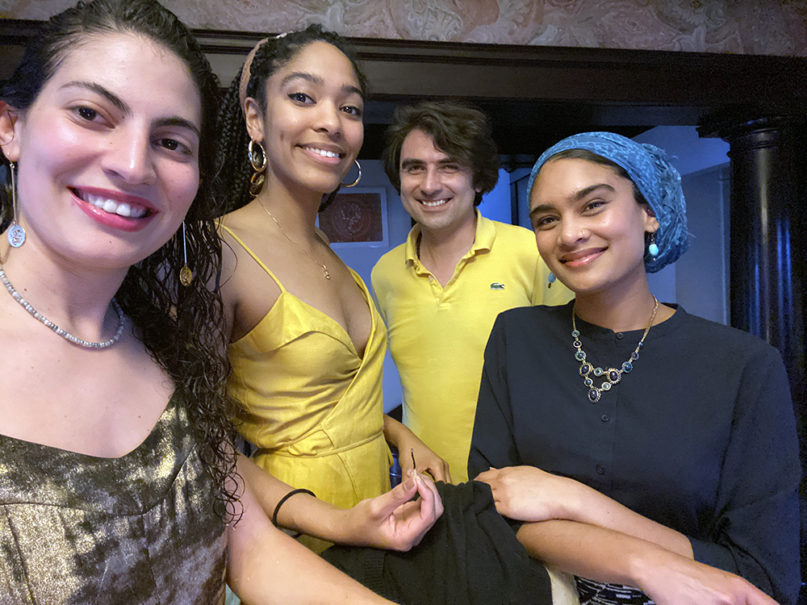 The group had to cancel in-person events they had planned for the community. And in order to maintain social distancing, they decided to not have guests and friends over.

Khan, a filmmaker, decided to stay in quarantine with her roommates instead of moving in with her parents in Santa Barbara. If she isolated outside the Abrahamic House, the experience wouldn’t have been the same, she said.

Now, every Monday evening, the fellows have a communal dinner. It’s a way for them to not just talk logistical house issues or specific faith topics, but to simply be among one another. They rotate cooking responsibilities.

“We actually made that decision before the stay-at-home order was put in place. We wanted to intentionally spend one evening a week having dinner together,” Khan said.

To Khan, doing multifaith work can sometimes be compartmentalized as a part-time thing or once-a-month meetings.

The weekly dinners change that.

“Living together with that intention, we have our interactions randomly through the kitchen where all of a sudden we’ll talk about scripture, which is really cool,” she said. 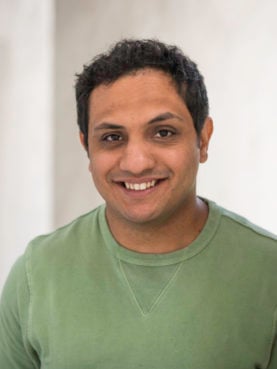 These are the kinds of experiences Al Samawi hoped the fellows at Abrahamic House would have.

Al Samawi said he grew up thinking that anyone who wasn’t Muslim “would go to hell no matter if they are good people or bad people.”

Now, Al Samawi lives by the phrase “Who saves a life, saves the whole world.”

“If we can change one person’s perspective from hate and ignorance to love and compassion, that would be kind of like saving the world,” Al Samawi told Religion News Service. “That’s what I really want to do.”

He was led to interfaith work after reading the Bible and realizing his faith shared many similarities with Christianity. The message and the name of the prophets were the same, he said.

Al Samawi began connecting with Jews and Christians through Facebook and at international conferences. He advocated for peace and dialogue, which he said spurred death threats against him. He eventually fled his war-torn homeland with the help of friends he’d made on Facebook, according to his book.

Since then, Al Samawi has detailed this harrowing tale at universities, churches and other houses of worship in the U.S. And now, his life will be portrayed in a film developed by “La La Land” Producer Marc Platt, with Oscar-winning screenwriter Josh Singer.

Al Samawi said he has received financial donations for the Abrahamic House from board members of the nonprofit as well as contacts he has made through his book and speaking engagements. The international nonprofit Moishe House, a collection of homes that serve as hubs for young Jewish leaders, has been a source of logistical help.

Al Samawi aims to open multiple Abrahamic houses across the country and globe. For now, his focus is on the L.A. fellows.

Since the roommates can’t host events for the public in person, they moved their programming online.

So far, the fellows have hosted an online summit exploring the intersections of faith and justice and a virtual symposium discussing fasting in different faith traditions. For the end of May, Cohen organized a virtual multifaith feminism event in honor of Shavuot, a Jewish holiday that marks the celebration of wisdom by staying up all night to learn.

On Thursday (May 14), the Abrahamic House hosted its most recent virtual event with a Zoom screening of Khan’s film documenting “Pray Beyond Borders,” a binational day of prayer at the U.S.-Mexico border in San Diego that included Muslim and Christian faith leaders. 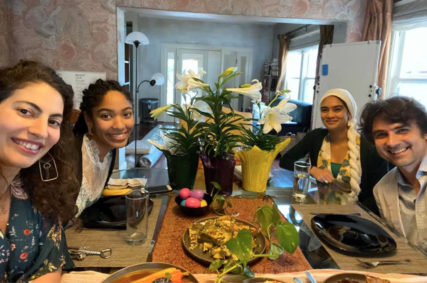 The 2019 event that Khan documented chronicled the six-month anniversary of Border Mosque, a group of Muslims that meets for prayer at the border on the last Sunday of the month. Those prayers coincide with Border Church, or La Iglesia Fronteriza, a Sunday service held for the last decade at the border and led by the Rev. John Fanestil, a United Methodist minister.

To Khan, this is the kind of storytelling she finds inspiring.

“The basis of my faith as a Muslim is to treat people kindly and well and compassionately,” she said. “We have an obligation as faith people to do whatever we can to actively construct a more just world.”

The fellows have also been blogging about celebrating major holidays together.

They wrote about cleaning the house in preparation for Passover and taking part in other rituals, like bedikat chametz, with guidance from Cohen. Instead of hiding pieces of leavened bread throughout the house, like the tradition entails, the fellows instead hid “spiritual chametz” embodying “anything that no longer serves us psychologically, emotionally and mentally.”

Cohen said that before the pandemic, she was also planning to attend Jewish festivals and home events in L.A. for Passover.

The intimacy of this tradition while at home with her housemates helped everyone get to know each other better, she said.

“It was one of the first rituals we did together, and it was really beautiful,” said Cohen, a feminist spiritual leader and artist. “It felt very powerful.”

To Mansour, 24, being at the Abrahamic House is a way to help others better understand her Baha’i faith.

“I was really attracted to an opportunity to share and represent my faith that is typically left out of interfaith spaces,” said Mansour, editor of One Report, a spiritually minded publication for young people of all faiths. “I was excited that Baha’i’s were even listed on the (fellowship) application.”

Excited to launch a new film series with a screening of @amkjourneys’ short film, "A Prayer Beyond Borders” May 14, 4-5:30pm PST. This will be an opportunity to watch the film together, hear from the filmmakers and community leaders about their work on the US-Mexico Border, and engage in a conversation about the intersections of organizing, multi-faith work and justice. Film synopsis included in the RSVP link in our bio!

Khan said the experience of being part of the Abrahamic House has been inspiring. She is glad to know there are other people who invest time and energy into this kind of interfaith work.

Before moving in, she hoped the fellows would all get along and become friends.

That hope, at least, has been fulfilled.

“It has definitely panned out very beautifully,” she said.