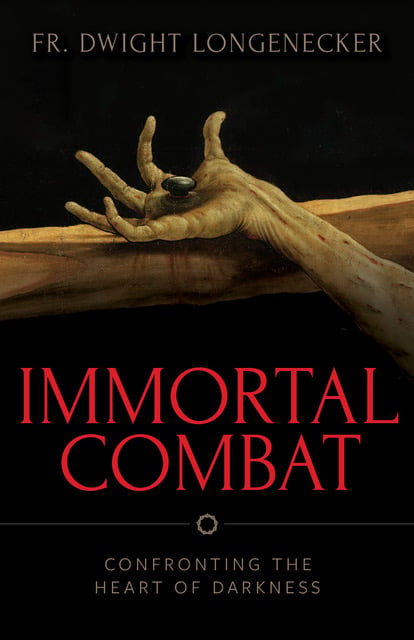 Vigilance, prayer and discernment keys to overcoming darkness of today

BOSTON — Evil is real and more prevalent than ever. But this does not mean our days need to be filled with despair. Two new books, “Immortal Combat” and “Spiritual Warfare and the Discernment of Spirits,” arm Christians with the knowledge of how to combat evil and replace fear with hope in Christ.

“If you read my book seriously, you will be shaken and troubled to the core,” states Fr. Dwight Longenecker, author of “Immortal Combat: Confronting the Heart of Darkness.” Each chapter describes a different mythical monster or literary symbol that helps illuminate the perennial battle between good and evil.

“The book employs the logic and language of the underworld,” Longenecker explains. “I use this type of language because I believe the imagination is a surer guide through the darkness than theoretical theologizing. It’s a place where a deeper kind of logic operates.”

EWTN “Women of Grace” host Johnnette Benkovic Williams said of the book, “‘Immortal Combat’ grabs you by the scruff of the neck, holds you up to the mirror of truth, and dares you to become the warrior for Christ you are called to be.”

In his “Spiritual Warfare and the Discernment of Spirits,” author Dan Burke, president of the Avila Institute, sheds light on the influence of the devil and the tactics required to combat him. It is a practical guide with steps to resist the lures and traps of the devil and advice on how to heal from past pain and suffering.

Burke shares difficult stories from his own life and explains how he learned to fight against negative and erroneous thoughts from the devil to gain the peace which only comes from God.

In March, Burke battled for his life after contracting COVID-19, attributing his miraculous recovery to his medical team and the prayers of his supporters.

One reader, Marcy Bayard, shared, “It is the first time in my nearly 50 years of life that I feel hopeful that I may be able to live a life without crippling anxiety. Dan’s accessible way of communicating profound truths has changed my life.”

“Immortal Combat” and “Spiritual Warfare” are both available at www.SophiaInstitute.com.

About Sophia Institute Press
Sophia Institute Press publishes and distributes faithful Catholic classics and new texts by the great and enduring figures of the Catholic intellectual tradition. Sophia was established to nurture the spiritual, moral, and cultural life of souls and to spread the Gospel of Christ in conformity with the authentic teachings of the Roman Catholic Church.

Request a Review Copy
Members of the media may contact our Publicity Coordinator at [email protected] for complimentary review copies or to set up interviews with the authors.