An Israeli Arab woman attends Friday prayers next to an 18th century Muslim burial ground, ahead of a protest against the decision made by the Tel Aviv-Jaffa Municipality to demolish the burial ground and build shelter for homeless people, in Tel Aviv, Israel, Friday, June 12, 2020. (AP Photo/Oded Balilty)
June 12, 2020
Kit Doyle

(RNS) — Each week Religion News Service presents a gallery of photos of religious expression around the world. This week’s photo selection includes a disputed Muslim burial ground in Israel, the funeral of George Floyd, and more. An Israeli Arab woman attends Friday prayers next to an 18th-century Muslim burial ground ahead of a protest against the Tel Aviv-Jaffa Municipality's decision to build a homeless shelter on the site, in Tel Aviv, Israel, Friday, June 12, 2020. (AP Photo/Oded Balilty) A visitor takes a selfie as she admires Leonardo da Vinci's late 15th-century mural 'The Last Supper’, at the refectory of the Convent of Santa Maria delle Grazie church, in Milan, Italy, Wednesday, June 10, 2020. Visitors were allowed into the building Tuesday after three months of closure due to COVID-19 lockdown measures. (AP Photo/Luca Bruno) 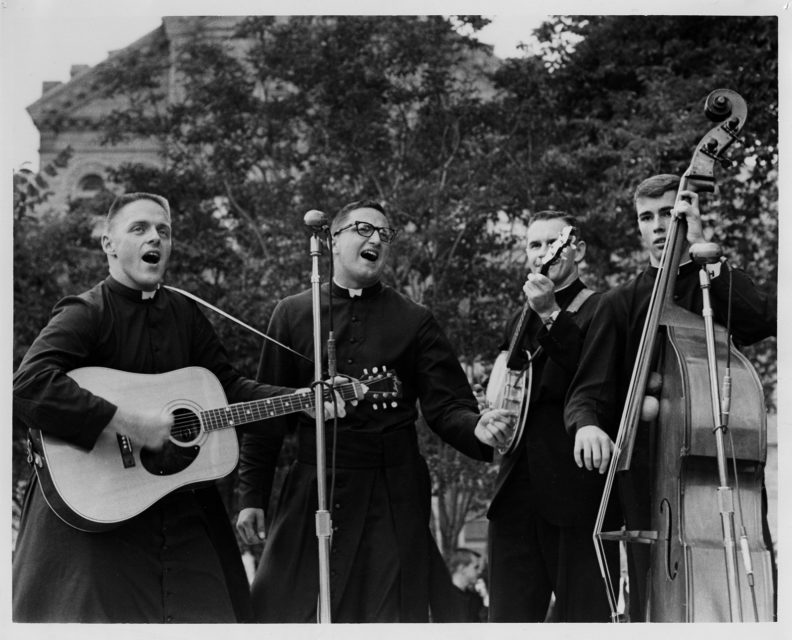 Catholic priests perform for a crowd of 2,500 people during a hootenanny at the Shrine Mall of Catholic Univer­sity of America, in Washington in 1965. The performers included clergy from the Dominican, Augustinian, Marist and Carmelite orders. RNS archive photo. Photo courtesy of the Presbyterian Historical Society Mourners pass by the casket of George Floyd during a public visitation for him at the Fountain of Praise church June 8, 2020, in Houston. (AP Photo/David J. Phillip, Pool) Pallbearers bring George Floyd's coffin into The Fountain of Praise church in Houston for his funeral on Tuesday, June 9, 2020. Floyd died after being restrained by Minneapolis Police officers on May 25. (Godofredo A. Vásquez/Houston Chronicle via AP, Pool) 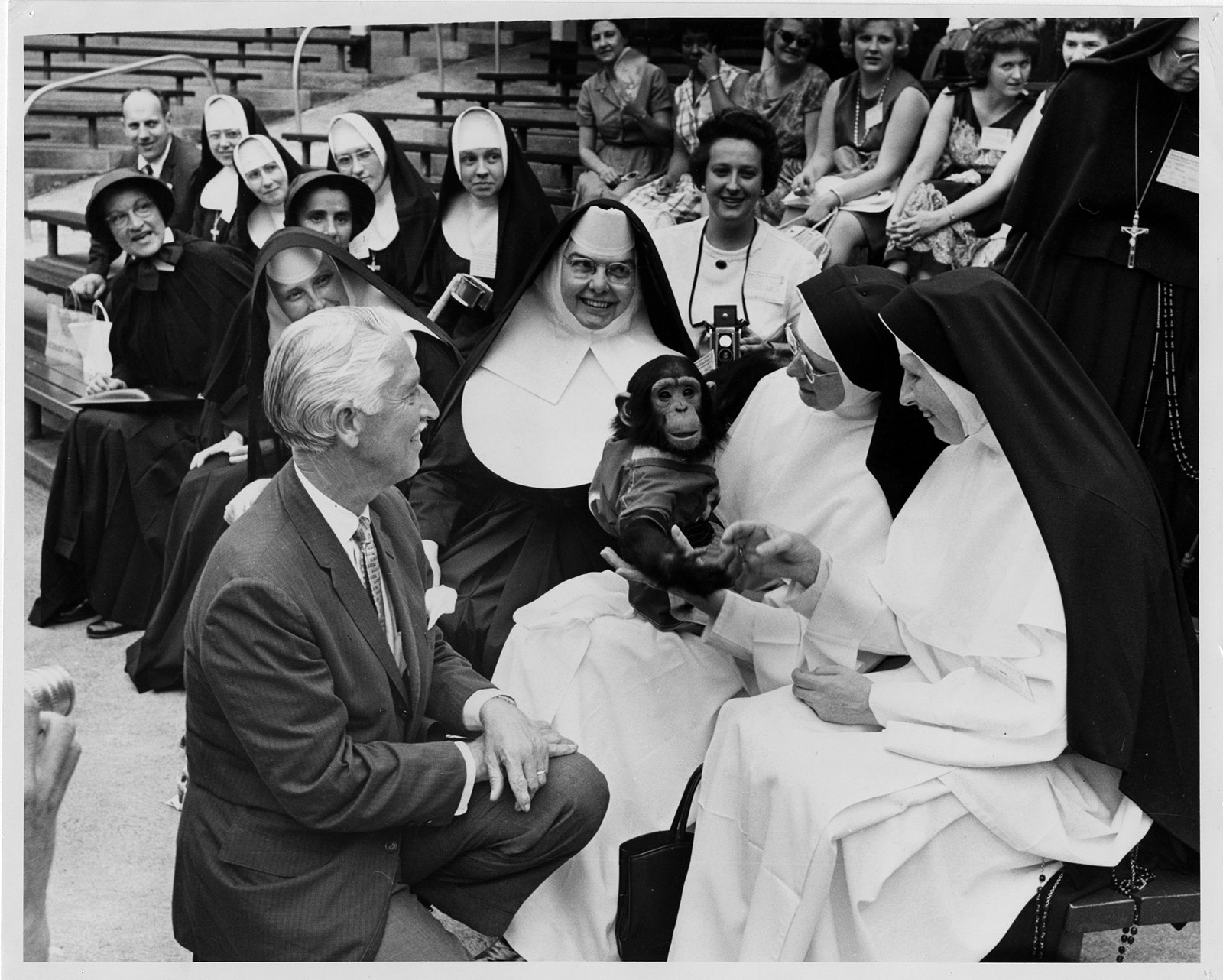 Adroitly upstaging his boss, Marlin Perkins, a monkey entertains nuns taking a tour of St. Louis during a convention week in June 1965. Nuns were guests of Perkins, director of the St. Louis Zoo, whose television shows about animal life enjoyed high ratings for some 15 years. RNS archive photo by Howard Vogt. Photo courtesy of the Presbyterian Historical Society A child waves a handkerchief at a procession marking Corpus Christi, a feast day commemorating the biblical transubstantiation of bread and wine into the body and blood of Christ, amid the coronavirus pandemic in La Paz, Bolivia, Thursday, June 11, 2020. Due to the pandemic the holiday was arranged to encourage faithful to stay home, offering an online Mass, and the procession to be escorted by members of the military. (AP Photo/Juan Karita) Members of Working Together Mississippi, a religious leadership organization, listen as Bishop Ronnie C. Crudup, Sr., of the Mid-South Diocese of the Fellowship of International Churches, center, calls for the removal of the Confederate battle flag that occupies the canton portion of the current Mississippi state flag, Thursday, June 11, 2020, during a news conference on the steps of The Cathedral of St. Peter the Apostle Catholic Church in Jackson, Mississippi. The multifaith organization believes the removal of the emblem would be a symbolic gesture by the state to seek repentance and racial reconciliation. (AP Photo/Rogelio V. Solis) 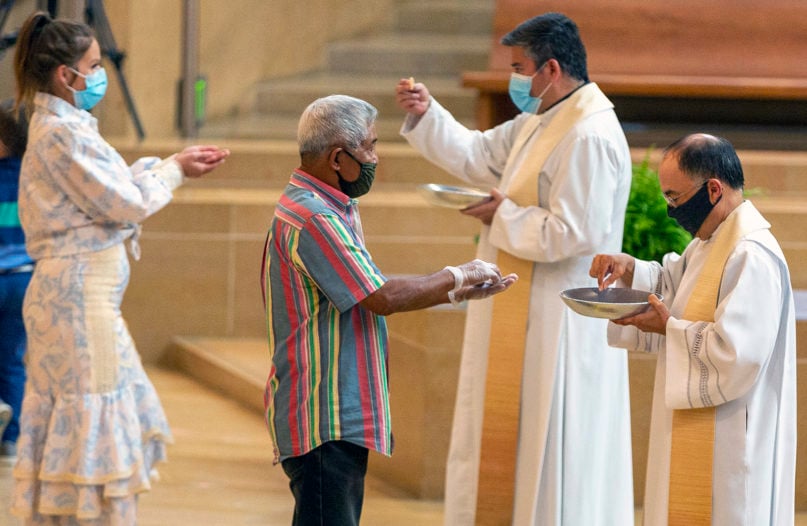 Worshipers wear masks and some wear gloves as they receive Communion at the first English Mass with faithful present at the Cathedral of Our Lady of the Angels in downtown Los Angeles, Sunday, June 7, 2020. Catholic parishes throughout the Archdiocese of Los Angeles suspended public Mass in March amid the coronavirus outbreak. (AP Photo/Damian Dovarganes)