(RNS) — I can’t pray in Jesus’ name, but I say “peace be upon him” when I hear it. For though he is one of Islam’s greatest prophets, referenced throughout the Quran and praised with lofty virtues, to pray in his name would be a violation to my faith’s tenets.

In a recent conversation with two friends, a rabbi and a Baptist minister, the rabbi jokingly asked me, “Do you also hold your breath at times while a Christian minister prays, wondering if you’re going to be able to say ‘Amen’ at the end?”

Considerations such as this come with the territory when you do interfaith work. The occasional interfaith vigil after a national tragedy doesn’t normally warrant concern, though there are examples of conservative ministers facing discipline for praying with other clergy, and some traditional faith leaders prefer to abstain from such events.

But when interfaith understanding is not only necessary to connect with your wider community but part of the dissolving of differences you believe faith can achieve, the question becomes, at what point is making adjustments to accommodate the other still fruitful? As an orthodox Sunni imam from Louisiana who now lives in Texas, I too have struggled with these questions.

RELATED: In an era of disinformation we have to hold The Tennessean to a higher standard

There are two basic ways to encounter a person of another faith seriously. One, which is engaging with another’s Scripture, will inevitably reveal expected differences, as well as some surprising similarities. In an effort to harmonize, it can be tempting to depart from one’s own understanding of Scripture to demonstrate an added layer of sameness that just isn’t there. But that would remove the richness of the study, and potentially compromise the authenticity of it as well.

There is also multifaith community work — when we form coalitions with other faiths to make a meaningful difference in society. This shouldn’t be a problem: You don’t have to shred your faith identity or Scripture; just champion its elements of service. Come to the table in the fullness of yourself, and demonstrate how you’re going to enrich that table with your faith-inspired work. Easy, right?

Not always. For instance, inevitably there are common prayers said over our common efforts, or introductory remarks that suddenly turn into prayer. Some faith traditions see the divine as more abstract, and an invocation — a prayer that calls upon God for relief or change — can be grasped by members of those faiths even if the prayer is calling upon different deities.

To others, the divine is personal and fixed and can only be invoked in specific ways. It should never be an expectation that a faith leader pray or say amen to anything that would violate that leader’s creed or traditions, but the onus should probably be on those who can adjust without violating to accommodate everyone in the room.

Perhaps, for example, if a Christian minister feels uncomfortable omitting “in Jesus’ name” when among colleagues of different faiths, the minister can offer a reflection instead or give a courteous disclaimer that “I will be offering this prayer as such” that at least gives the others a chance to respectfully abstain. To make fellow faith leaders uncomfortable with your invocation could compromise the very unifying spirit that calls us all together in the first place.

In the same way, we should be careful not to assert that those who believe in an exclusive route to salvation are necessarily unable to work with a diverse group of people.

One of the most fruitful dialogues I’ve had in years came in March at North Carolina State University with the Rev. J.D. Greear, who serves as president of the Southern Baptist Convention. At an event convened by Neighborly Faith, Greear and I founded a friendship on our ability to speak faithfully and honestly about our differences, even with a crowd of more than 1,000 looking on.

Five years earlier, three young Muslims had been murdered in nearby Chapel Hill. Some of the family members of those victims were present. Our topic was hope and uncertainty, and we expressed hope that we could work together against hatred and polarization. As a start, Greear, one of the most prominent evangelicals in America, openly condemned anti-Muslim bigotry.

Pastor Greear and I also spoke about religious freedom not being restricted to one religious group, without either my or his concept of salvation being compromised or made ambiguous. I was and am fine with his vision of the hereafter not having space for me, so long as it doesn’t become an obstacle to me having space in the here and now.

It can be so much easier to unite with an outsider than an insider who you feel threatens the foundations or trajectory of your shared faith. Indeed, a theological progressive may have a harder time with a traditionalist of the same faith than a traditionalist of another faith.

But it’s a mistake to think that the divisions in our faith give us implicit insights into those of other faiths. Each faith’s factions have their own unique political and scriptural considerations in their internal debates. The basis of our broader cooperation is not what we share as believers, but instead shared community goals.

As our country becomes further polarized into a secularized left and right (white nationalism is no less secularizing than any “ism” on the left), it is imperative that as religious people we don’t merely dress political slogans with religious scripture. We must instead model for the broader society what it looks like to work on shared goals despite our different beliefs.

We can talk openly and honestly with one another without shying away from our disagreements. And we can work, proudly anchored in our different faith traditions, with similar goals through recognition of our full shared humanity.

(Imam Omar Suleiman is the founder and president of the Yaqeen Institute for Islamic Research and an adjunct professor of Islamic studies in the graduate liberal studies program at Southern Methodist University. He is also co-chair emeritus of Faith Forward Dallas and a special adviser to Faith Commons. The views expressed in this commentary do not necessarily reflect those of Religion News Service.) 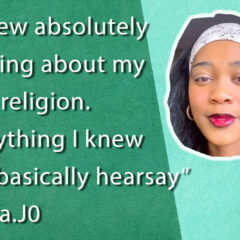 News
‘I knew absolutely nothing about my own religion. Everything I knew was basically hearsay’