(RNS) – In northern New Jersey’s Ramapo Mountains, the coronavirus has hit the Ramapough Lenape Tribe hard. But deaths, job loss, food insecurity, isolation and mysterious sickness are not new to the tribe.

“We’ve been suffering from our own quote-unquote COVID-19 for 60 years,” said Chief Vincent Mann, head of the Ramapough Tribe’s Turtle Clan. “So this has really been wearing us down.”

The Indigenous community has fought for recognition of its tribal status. It has seen racism and discrimination. And it has faced deadly health disparities, environmental crises and legal challenges caused by decades of illegal, systematic toxic waste dumping by the Ford Motor Company. Thousands of tons of toxic paint sludge contaminated the watershed where Ramapoughs drank water and the woods where they foraged food, devastating the tribe and causing rare cancers.

Aid from local volunteers, including Sikh groups in the area, has at least helped “take the sting out of COVID,” Mann said.

Since the onset of the pandemic, volunteers from the Guru Nanak Mission in Oakland, New Jersey, and the Sikh non-profit Khalsa Aid — which connected with the tribe through Four Directions Mutual Aid, a group supporting Northeast tribes during the pandemic — have delivered thousands of pounds full of culturally sensitive food items, baby formula, diapers and other supplies to the tribe. 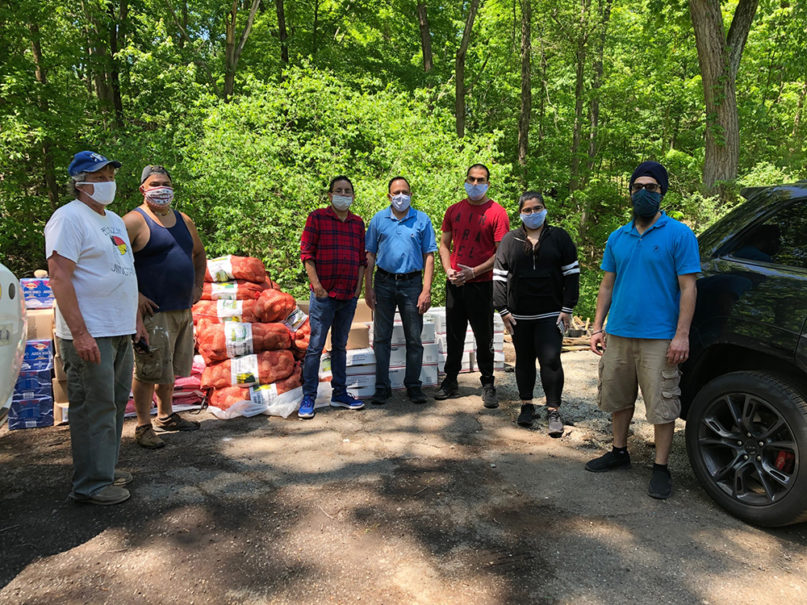 Their efforts are an extension of Sikh communities’ long tradition of feeding those in need through langar, the volunteer-run community kitchens where gurdwaras serve free vegetarian meals to any and all visitors.

But members of the Oakland gurdwara have also been lending their time and manual labor in hopes of creating something that feeds the tribe for generations to come.

The tribe is in the early stages of developing the nine-acre Munsee Three Sisters Farm, where members have begun growing hemp as a cash crop to generate revenue for the community down the line. They’re also growing crops, including potatoes, beans, squash and corn, to sustain their own families. Local groups like the Sikhs have donated compost, seeds, plants, supplies and equipment to make the endeavor possible.

Through the farm, clan mother Michaeline Picaro said, the tribe has a chance to rebuild its self-reliance. She envisions the project as a way to reconnect members with Indigenous farming practices and the land they once roamed without fear of being “poisoned.”

“This farm is a place of healing, on a nutritional level,” Picaro said, “where they will reap the benefits of the harvest of healthy food, but also healing spiritually and from the multigenerational emotional trauma in this community.” 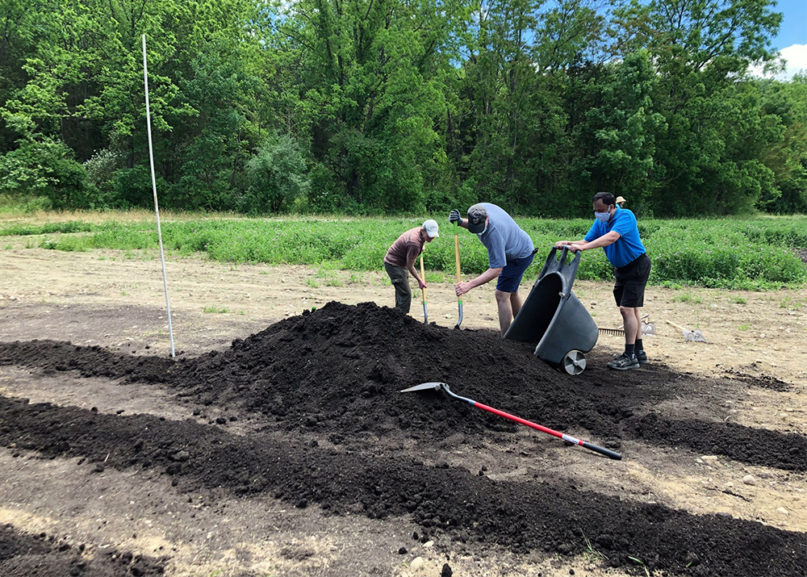 For the gurdwara, lending a hand in this food sovereignty initiative is the ultimate act of investment —following the tradition of Sikh founder Guru Nanak, who famously was given money as a child by his father to invest and instead used it to feed some hungry men he encountered.

“When we provide seeds or farming tools, that sustains communities for much longer than just doing a food truck once or twice,” explained Amritpal Kaur, a Khalsa Aid volunteer who assisted at the farm and with food drop-offs. “Especially because of the pandemic, we want to provide both short-term food staples and long-term solutions.”

Tapping into an ancient tradition

From farming projects to meal pick-up and drop-off operations, during the pandemic, gurdwaras have been getting creative with this centuries-old practice to best address the needs of the moment. 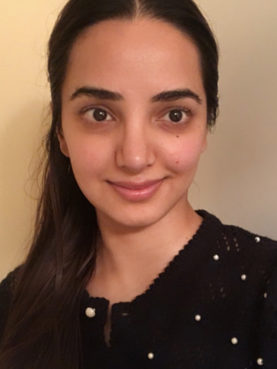 “The concept of langar isn’t just limited to the four walls within the gurdwara,” Kaur said. “It’s about serving all of humanity that needs it, inside or outside of the gurdwara. It’s about not looking at who’s reaching out for an extra plate; it’s about filling up that plate.”

Langar has become one of Sikhs’ most visible embodiments of the principle of seva, or selfless service. The institution represents Sikhs’ commitment to equality: All visitors to the gurdwara sit on the floor and eat together, regardless of caste, creed, color, class and gender. Proselytizing is not allowed.

“Langar from the get-go was meant for the needy and to build egalitarian community,” explained Harinder Singh, a co-founder of the Sikh Research Institute in New Jersey. “Langar’s aim is to perpetually reflect on what policies to change or create in order to establish just society based on IkOnkar,” a symbol of God’s unity.

The work is funded through the concept of dasvandh, in which Sikhs are expected to donate 10% of their earnings for the good of the community. Many of these funds go toward equipping gurdwaras with industrial cooking equipment and bulk purchases of ingredients.

Houses of worship across the country have spent the past months experimenting with ways to produce and distribute massive amounts of food to those in need. But food distribution at many of America’s estimated 246 gurdwaras — with large-scale cooking operations and infrastructure for hygiene, volunteers and donations in place — is already a well-oiled machine.

Take the Khalsa Care Foundation in Pacomia, California. Its food pantry now serves over 400 families regularly during the pandemic, up from about 75 families before, and it has provided about 105,000 prepared meals in a 10-week period. The organization has partnered with the city of Los Angeles to bus the meals to households where disabled and senior residents live. Without the Sikhs, one city official told the Los Angeles Daily News, “we’d not have been able to do that.”

Due to COVID-19 restrictions, many gurdwaras are finding that they have to tweak their strategies to better assist locals during the pandemic.

Langar traditionally involves serving prepared hot meals. But as many hospitals and other organizations will not accept cooked food due to hygiene reasons, some gurdwaras have shifted to offering groceries, food staples or food prepared by local restaurants. 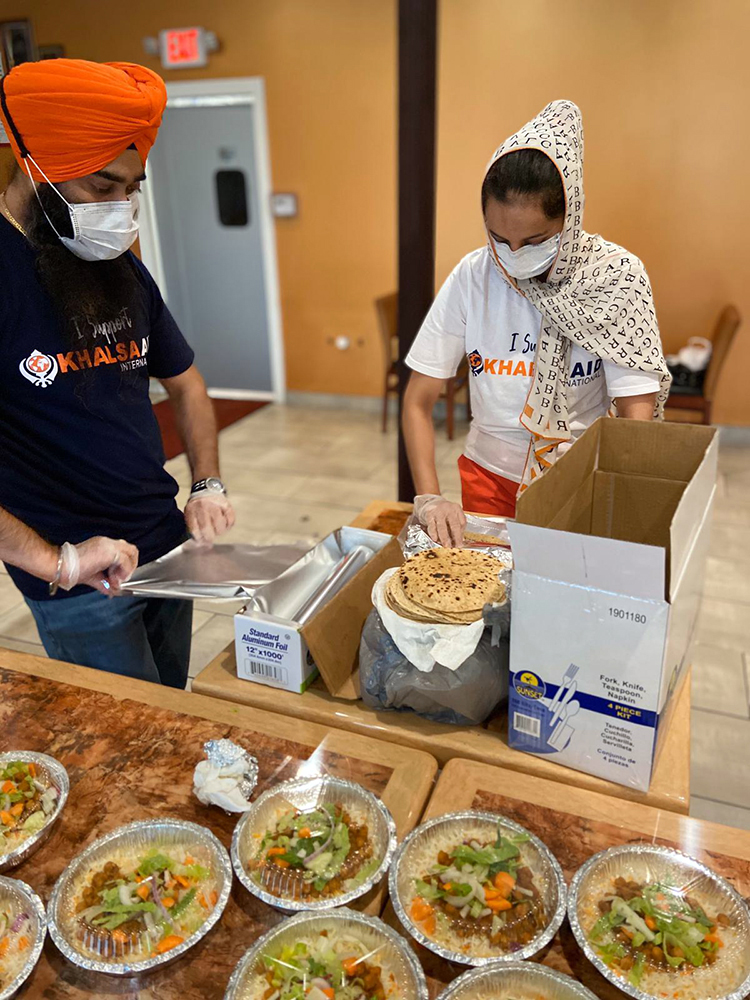 As Khalsa Aid, which collaborated with the Ramapoughs, expanded its work to 14 more states during the pandemic, the group has focused on improving access to food in rural and other underserved areas.

“We’ve been trying to connect to vulnerable communities across the country that have been neglected, or maybe aren’t able to tap into government resources or aren’t near healthy food options,” Amritpal Kaur explained. “There are a lot of gurdwaras doing the usual langar and Sikh food pantries giving food. But what about people who live in rural parts or don’t have cars?”

Some groups, like United Sikhs, have set up hotlines to connect individuals in need to meals and groceries. Drive-through, pick-up and drop-off food distribution have also become common solutions, both to increase access to food and to prevent gatherings of people that could spread the coronavirus.

From Detroit to Des Moines, some Sikhs have been delivering pizza to hospitals and first responders. In Virginia, the SevaTruck has served 20,000 free meals — two or three times their typical rate — in a two-month period since the outbreak began. Because of school closures, which mean some kids now do not have access to breakfast and lunch, the meals-on-wheels non-profit is visiting some locations to distribute meals once a day.

At the Gurdwara Dasmesh Darbar in Salem, Oregon, volunteers used to prepare langar every weekend in the temple’s community kitchen. Now, even as weekend services have stopped, the free meals have not. Twice a week, volunteers deliver 100 to 150 meals to health care workers at Salem Hospital, cancer patient groups, local police stations and fire stations.

“We’re kind of in our natural habitat,” said volunteer Pawan Kaur, 28, who is founding a local group to get Sikh youth involved in seva. “We’ve been doing this from the start of our religion; it’s nothing different for us.”

The only change, Pawan Kaur said, is that gurdwaras are now actively searching out and delivering meals to those who are in need of the food rather than simply leaving their langar halls open to everyone. Before, the langar meals mostly stayed within the gurdwara’s own congregation.

“This has helped us open our eyes to the community that really does need the langar,” Pawan Kaur said. “Not everybody has the transportation to come eat the food that is provided on Sunday. But now we know that we can go out of our way and deliver the food to people that need it.”