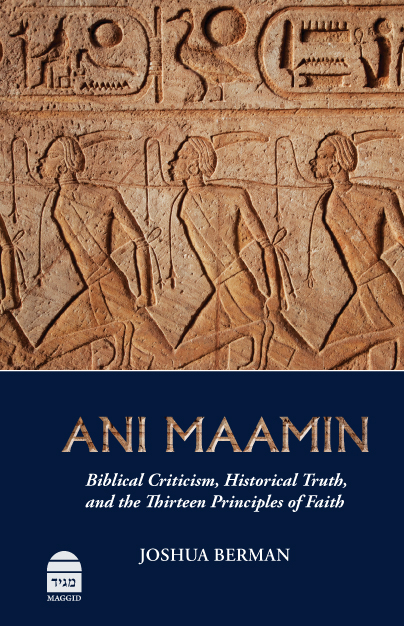 For Orthodox Jews around the world, the Torah is seen as the unmediated and uncorrupted word of God delivered to the Israelites, and thus Orthodox rabbis and scholars have largely avoided the challenging questions posed by critical study of the Hebrew Bible.

Now, a Princeton-educated professor of Bible at Bar-Ilan University in Israel aspiring to articulate an Orthodox Jewish approach of spiritual and intellectual integrity. In his newest book, Ani Maamin: Biblical Criticism, Historical Truth and the Thirteen Principles of Faith, Rabbi Dr. Joshua Berman critiques the claims of source criticism.

Berman’s foundational premise is that many of the challenges to tradition emerge because scholars erroneously approach the text with anachronistic views of how pre-moderns wrote about the past, and about what constitutes a contradiction or inconsistency within the text. For Berman, on scholarly as well as religious grounds, the text of the Hebrew Bible must be understood within its ancient literary context. Amongst the issues discussed in this new work, Berman addresses a wind range of questions: Are the accounts of the Hebrew Bible historically accurate? Was there an Exodus? Why does the Torah provide multiple versions of its law and its stories? Is there any warrant for believing the Torah is a divine text? Can a Jew seeking intellectual honesty maintain fidelity to the Thirteen Principles of Faith?

“These challenging questions are part of what lead some people to leave the fold,’ Berman explains. “Others wish to maintain the lifestyle and strong sense of community afforded by Orthodox Judaism, but they’re incapable of reconciling their faith with their intellectual integrity, so they practice a form of Judaism that is spiritually desiccated.”

“Ani Maamin” (Hebrew for “I believe”) is also the title The Thirteen Principles of Faith. These are thirteen theological tenets that that Maimonides, Judaism’s greatest philosopher and jurist, composed in Spain in the twelfth century. These tenets make up Orthodoxy’s creed.

“My hope is that Ani Maamin will bring to the fore emerging academic voices that challenge some of the reining critical paradigms, and at the same time, will allow Orthodox Jews to read anew many of their own theological sources in a manner that will open a space for greater theological flexibility, Berman says.”