(RNS) — Each week Religion News Service presents a gallery of photos of religious expression around the world. This week’s photo selection includes a fire at an almost 250-year-old church in California, the 25th anniversary of the Srebrenica massacre in Bosnia and more. 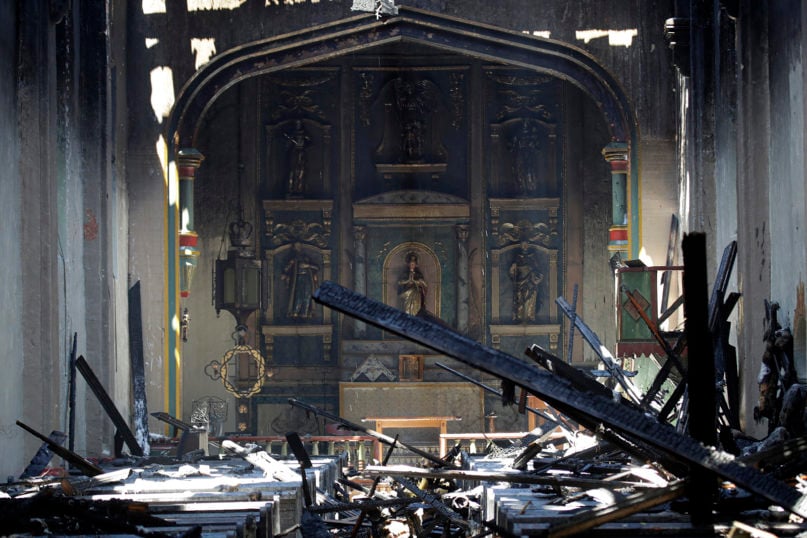 The interior of the San Gabriel Mission is seen in the aftermath of a morning fire, Saturday, July 11, 2020, in San Gabriel, California. The fire destroyed the rooftop and most of the interior of the 249-year-old church that was undergoing renovation. (AP Photo/Marcio Jose Sanchez) 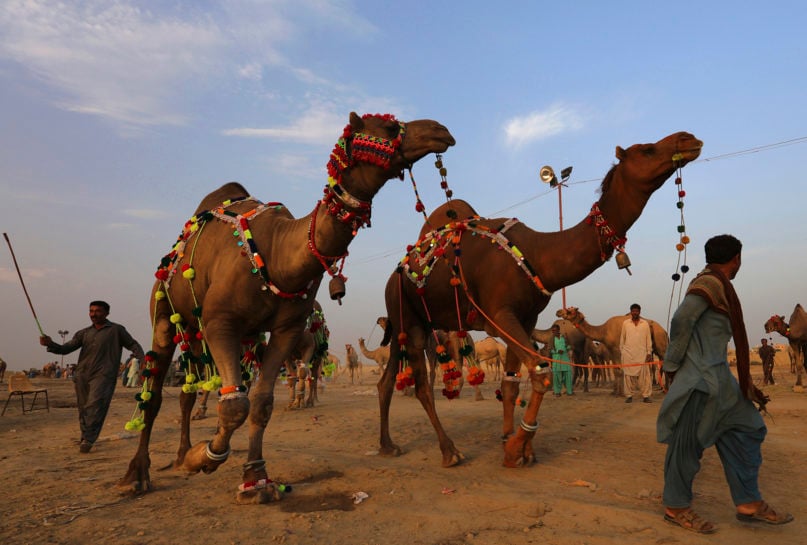 Vendors arrive with their decorated camels at a market set up for the upcoming Muslim festival of Eid al-Adha on the outskirts of Karachi, Pakistan, Thursday, July 16, 2020. Eid al-Adha, or Feast of Sacrifice, commemorates the willingness of the Prophet Ibrahim (Abraham to Christians and Jews) to sacrifice his son. (AP Photo/Fareed Khan) 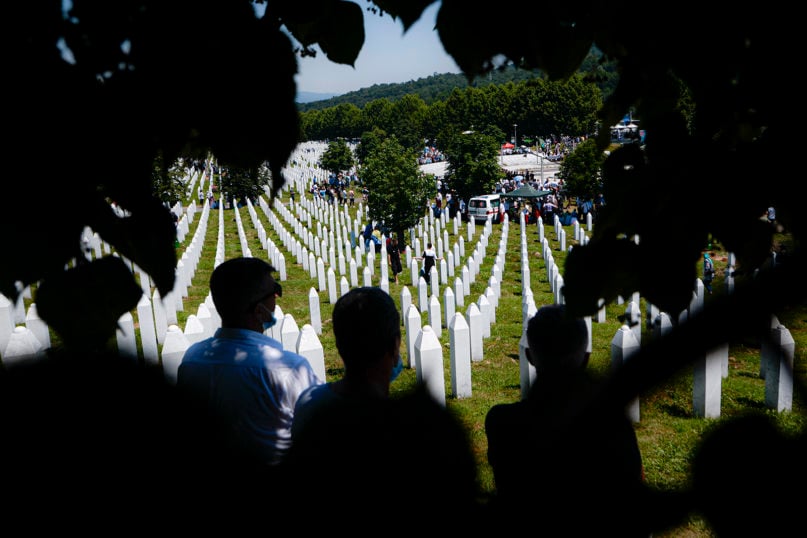 Bosnians attend the funerals of nine newly found and identified male massacre victims in Potocari, near Srebrenica, Bosnia, Saturday, July 11, 2020. Mourners converged on the eastern Bosnian town of Srebrenica for the 25th anniversary of the country’s worst carnage during the 1992-95 war, and the only crime declared a genocide in Europe since World War II. More than 8,00 mostly Muslim men and boys were killed in the area in July 1995. (AP Photo/Kemal Softic) 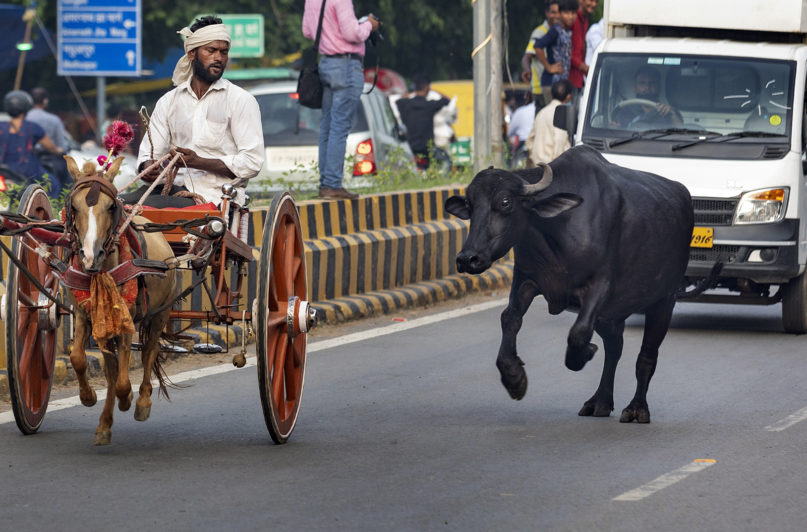 A stray buffalo runs alongside a participant in a traditional race held every Monday of the Hindu month Saawan in Prayagraj, India, Monday, July 13, 2020. The month of Saawan coincides with the monsoon season. (AP Photo/Rajesh Kumar Singh) Women create “friendship leis” to distribute at the Annual Convention of the National Council of Church Women in Milwaukee. More than 2,500 church women from the U.S. and 25 foreign countries attended the annual convention in Nov. 1948. RNS archive photo by Evelyn Schaefer. Photo courtesy of the Presbyterian Historical Society Justin Claravall, left, Gregory Celio lie prostrate on a carpet while Bishop Alex Aclan leads a prayer during an ordination ceremony for the new priests at Dolores Mission Church in Los Angeles, Wednesday, July 15, 2020. The ceremony took place outdoors as indoor religious activities have been suspended due to the coronavirus pandemic. (AP Photo/Jae C. Hong) 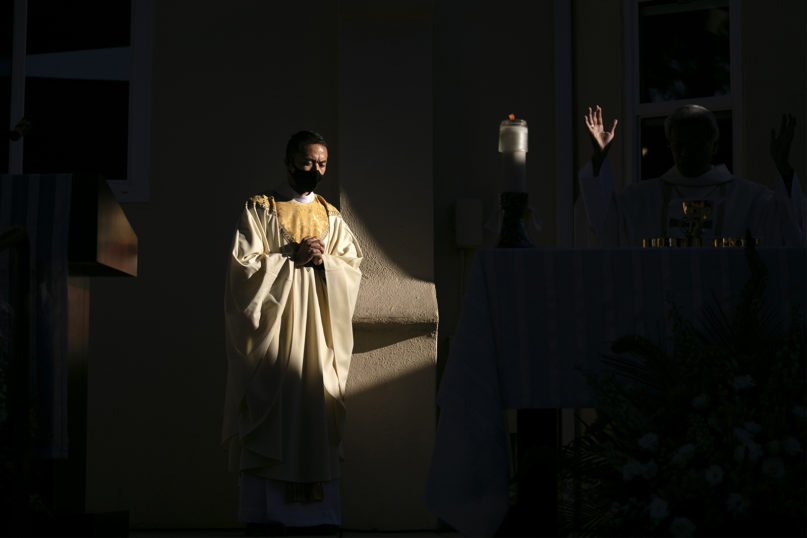 A shaft of sunlight falls on Justin Claravall during an ordination ceremony for the new priest at Dolores Mission Church in Los Angeles, Wednesday, July 15, 2020. The ceremony took place outdoors since indoor religious activities have been suspended due to the coronavirus pandemic. (AP Photo/Jae C. Hong) 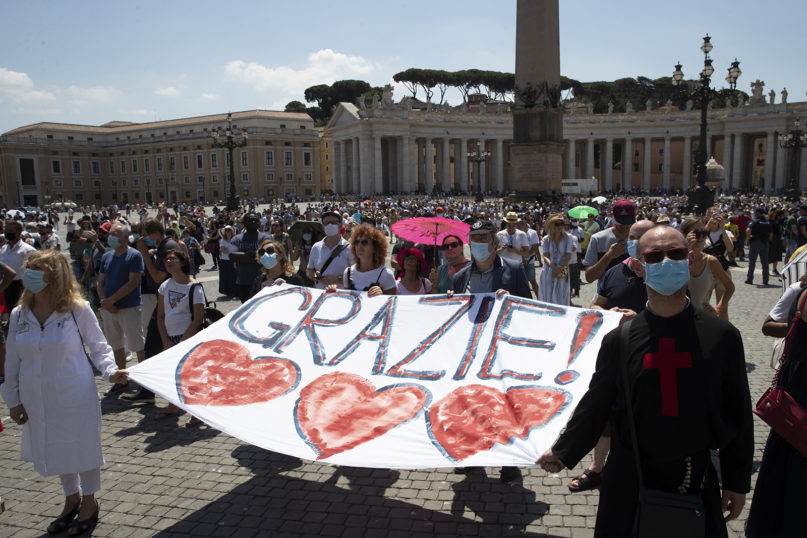 People hold up a banner reading “Thank you” in Italian as Pope Francis delivers his Sunday message and Angelus from the window of his studio overlooking St. Peter’s Square at the Vatican, July 12, 2020. (AP Photo/Alessandra Tarantino) 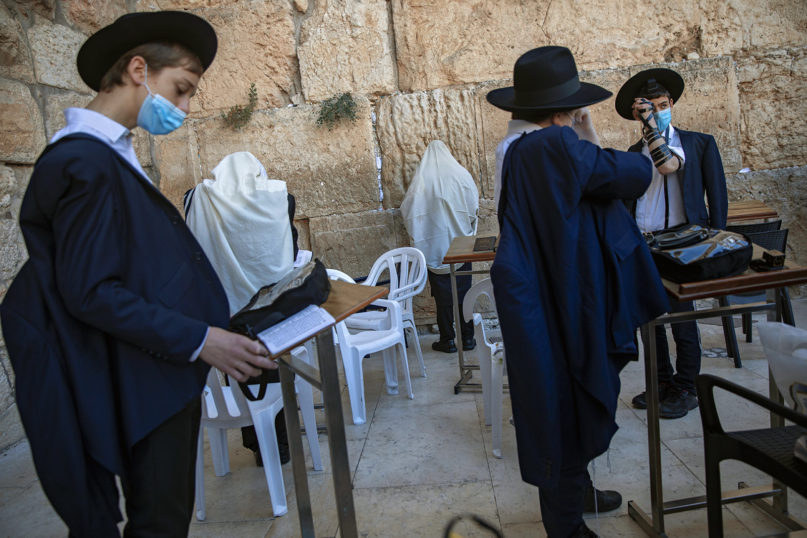 Ultra-Orthodox Jewish males wear face masks during morning prayer at the Western Wall, in Jerusalem’s old city, Thursday, July 16, 2020. The Western Wall plaza is divided to sections, in each of which a maximum of 20 people are permitted to stand, according to government’s measures to help stop the spread of the coronavirus. (AP Photo/Oded Balilty) 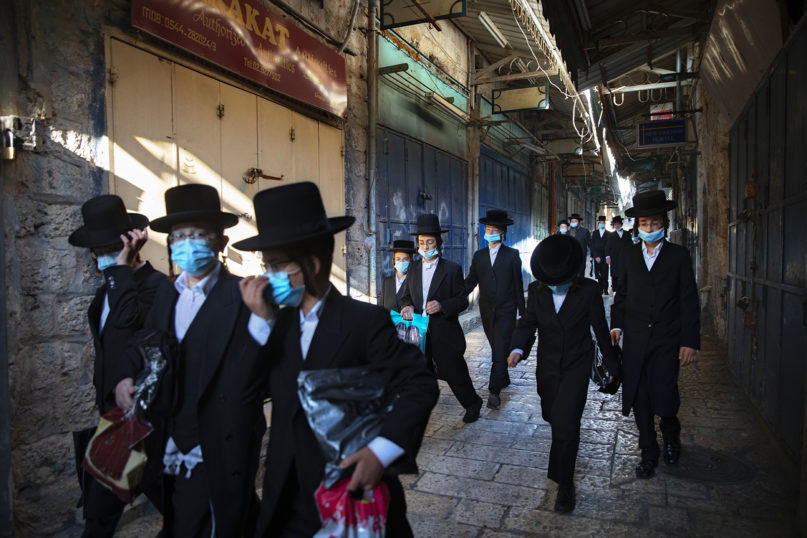 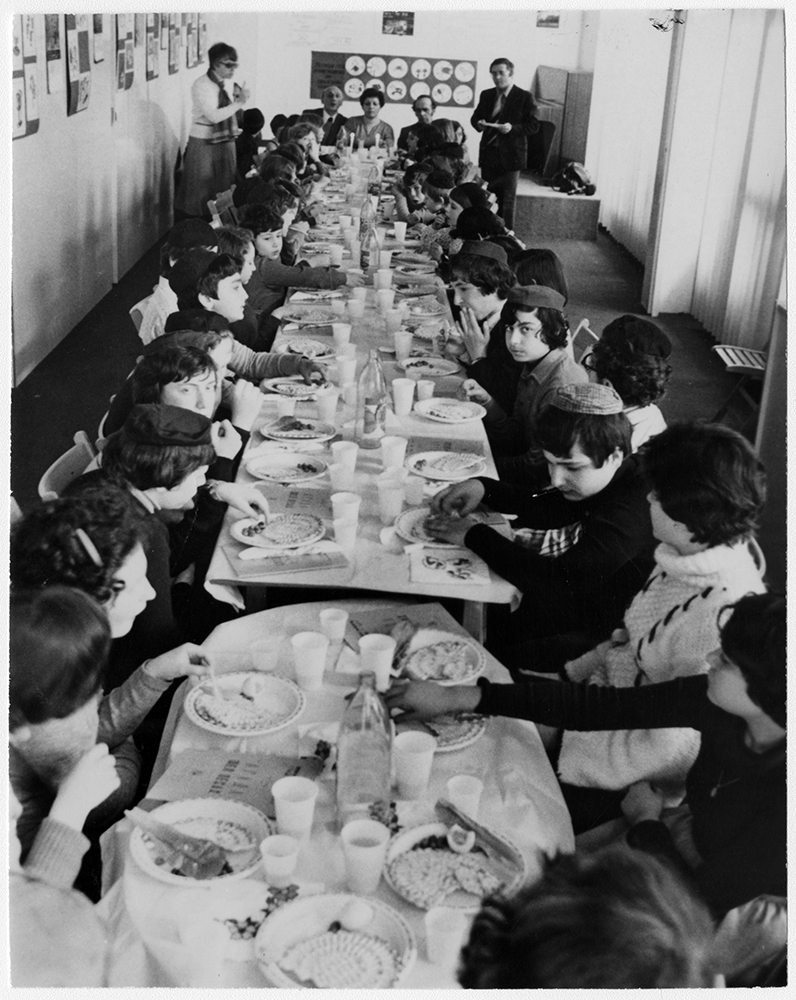 Soviet Jewish emigrants, awaiting visas from western nations, enjoy a Seder demonstration in Rome, circa April 1, 1980. The Seder was sponsored by the American Jewish Joint Distribution Committee (JDC) as part of a “Yiddishkeit” program to teach Jewish tradition and culture to the participants. RNS archive photo. Photo courtesy of Presbyterian Historical Society