(Sightings) — On 6:08 p.m. on August 4, 2020, a near-nuclear explosion blasted through my hometown of Beirut. In a split second, 300,000 people found themselves homeless, 6,000 were injured, and 200 or more killed. Staring at my screen thousands of miles away from the unfolding horror, I was overwhelmed by a rollercoaster of emotions: fear, anxiety, anger, sadness. But what was constant was a feeling of despair and helplessness.

Perhaps as a coping mechanism, I found myself collecting all the mutual aid and fundraising initiatives I was finding online in one document. The initiatives and charities I was compiling were not for long term projects, but for immediate relief. Relief was direly needed, given the near complete absence of the state from rescue, first-aid, and relief efforts.

While the state was busy doing something else, like repressing protestors, many of the initiatives and nongovernmental organizations mobilizing on the ground were grassroots organizations that were addressing the needs of the community. The international contributions of American dollars for these NGOs and initiatives were doubly needed because of the financial and economic crisis in Lebanon — even those people and institutions who still had savings could not access them to rebuild because of the illegal capital controls that have been imposed by banks in the past year.

When my friends in the U.S. and Canada asked me for trusted initiatives for post-explosion relief and aid to contribute to, my list was ready. But I hesitated.

As someone who works and teaches on the politics of charity, I was very much aware of the problems of the NGO-ization of aid and the way it contributes to reproducing a neoliberal state by providing the services the state used to provide. An important demand of many people in Lebanon (and the Lebanese October Revolution) is to build a social state that provides education, health, social security, electricity, water, along with the other services that form the foundation for a good life.

There is also the issue of priorities and accountability: NGOs and big philanthropic donors give based on their own agendas, rather than the needs of recipients. And there are numerous stories from around the world detailing how when these NGO projects do not produce the desired effects, they just change course or leave the community, without accountability. The question of inequality likewise stubbornly persists. Many of these NGOs only seek to relieve poverty and not to eradicate it. They do not address the root of the problem, and so they actually reproduce inequality. 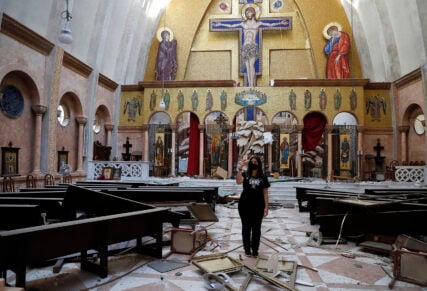 A woman takes pictures of a damaged church after an explosion hit the seaport of Beirut, Lebanon, Wednesday, Aug. 5, 2020. Residents of Beirut awoke to a scene of utter devastation on Wednesday, a day after a massive explosion at the port sent shock waves across the Lebanese capital. (AP Photo/Hussein Malla)

Despite all these structural problems with NGOs, I was nevertheless left with the question of what to do, in this historical conjuncture and situation in Lebanon. While I, like many activists, believe that we need a state that acts as a “custodian of the public good,” I also do not want to idealize the state, as the “public good” is not an obvious category, nor is the state a neutral vessel that provides services.

The state governs and produces particular kinds of citizens, productive disciplined workers loyal to it. By contrast, many initiatives and NGOs in Beirut are driven by other ideals of life, promoting different relations to the environment, work, each other, and even the state itself. I thus felt it was important to support a variety of initiatives when thinking about what organizations to donate to.

Furthermore, in Beirut, many initiatives are grassroots efforts or the work of individuals, and are not funded by philanthropic institutions or actors. Many organizations prefer monthly donations, because this frees them from the complications of having to rely on big funders. For this reason, long-term funding from individuals committed to a cause contributes to help sustain such movements. Finally, the progressivist ideals of development — if their aims of self-reliance are even an ideal for some — and the desire for social justice and the eradication of poverty are still a far way off from being realized, so there is continued need for short-term solutions that provide food, health, shelter, or even cash-(re)distribution.

However, many of the organizations that have been providing such services in Lebanon are affiliated with religious institutions. Most Christian and Islamic organizations operate as non-governmental organizations, which do not need prior authorization from the state, but simply need to give public notice (though sometimes, the Ministry of the Interior brandishes a repealed emergency law requiring authorization to throw roadblocks at organizations that are overtly political, such as those fighting the state’s arbitrary detention).

Giving to religious charities in Lebanon brings extra complications because of the way religion figures in Lebanese politics and law. Right now, Lebanon is ruled by a political system described as consociationalism, which divides political and administrative offices among the different religious communities, known as sects.

Officials, as representatives of particular sects, then use the resources of the state to build their bases by providing them with services. Some religious charities are tied to particular parties and political actors who claim to stand for particular religious communities, and thus use these charities to further their clientelism. While this is surely regrettable, it is the bread and butter of politicians everywhere.

However, not all religious charities endorse or work to reproduce this political system. For the many who might still want to perpetuate a religious tradition, these organizations provide education, care, and services that align with their sensibilities.

Many of the citizens who today demand the end of consociationalism are the products of educational institutions manned by these religious organizations. That is to say, some of these organizations perpetuate a secularized understanding of religion: they consider religion a matter of belief and of practices that should be kept in the private and should not affect the way the government is run.

In this context, donations to charities and aid organizations, whether religious or not, will most probably be a Band-Aid on a gaping wound, even if religious giving can do transformative, even revolutionary, work. But giving discerningly when combined with the real work of justice — from protesting to educating — remains an important way of using one’s privilege to do one’s bit.

Below is a list of initiatives in Beirut, recommended by the author, that target marginalized communities:

(Nada Moumtaz, an assistant professor of religion and in Near and Middle Eastern civilizations at the University of Toronto is the author of the forthcoming book God’s Property: Islam, Charity, and the Modern State. This article originally appeared in Sightings, a publication of the Martin Marty Center for the Public Understanding of Religion at the University of Chicago Divinity School. The views expressed in this commentary do not necessarily represent those of Religion News Service.) 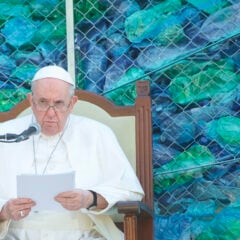 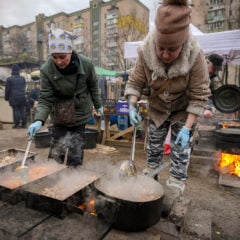