VATICAN CITY (RNS) — Pope Francis used a prerecorded TED talk that was streamed on Saturday (Oct. 10) to urge policymakers to side with science and to deal with climate change as a “moral imperative.”

“Science tells us each day with greater precision that urgent action is needed — I am not exaggerating; this is what the science tells us! — if we want to have the hope of avoiding radical and catastrophic climate change,” Pope Francis said in the message.

Saturday’s video appearance was the second time Francis has appeared at the TED conference, the 35-year-old series of gatherings filmed at the Vatican. His first, in 2017, also touched on climate change.

In his 13-minute talk, Francis continued a recent focus on economic and political systems as the driver of climate change and other ills facing humankind, including income inequality and the COVID-19 pandemic.

“The current economic system is unsustainable,” he said. “This leads to a new economy where the production of wealth is directed to the integral well-being of the human person and to the improvement — not the destruction — of our common home.”

In the same way as we must rethink today’s economic models, Francis said, it’s necessary to reform politics, which the pope described as “one of the highest forms of charity.” 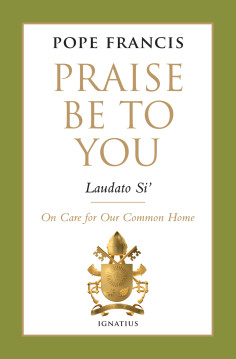 Francis took inspiration from his 2015 “green encyclical,” Laudato Si, which called out government and business leaders for placing profit above the interests of human development, especially indigenous peoples. Sitting at a desk against a background of bookshelves, the pope invited people to embark “on a journey together” to solve a socio-economic crisis with action rather than words.

The pope outlined three steps to address the crisis.

“My first proposal is to promote at every level education geared toward the care of our common home, developing the understanding that environmental problems are linked to human needs,” Francis said.

This education, according to the pontiff, must be “based on scientific data and on an ethical approach.” He also praised the “new ecological and social sensitivity” shown by many young people committed to social justice and the environment.

Francis’ second proposal was to remake the distribution of food and water in ways that are respectful of the environment. Finally, the pope called for “a continuous substitution, but without delay, of fossil fuels with clean energy sources.”

“Scientists calculate approximately fewer than 30 years — we have few years, fewer than 30 — to drastically reduce greenhouse gas emissions into the atmosphere,” the pontiff cautioned.

Francis has been a strong supporter of the 2016 Paris Agreement for the reduction of greenhouse gas emissions. He has also often stressed the importance of committing to the Millennium Development Goals of the United Nations, which tackle everything from climate change to eliminating poverty.

As the pope wrote in his newly released encyclical, Fratelli Tutti (Brothers All), the challenges and choices humanity faces today cannot be faced alone. The COVID-19 pandemic has highlighted the interconnectedness of society today and the need for concerted solutions, Francis said.

Individuals, Catholic and non-Catholic organizations as well as multinational companies and governing bodies need to come together in order to ensure that the earth is “cultivated and protected.”