(RNS) — Billy M. Honor has been encouraging clergy to join him at the polls for the past three years.

Honor, director of faith organizing for the New Georgia Project, said clergy can be on hand to pass out snacks to voters waiting in long lines, maybe a poncho if it starts to rain. Somehow it always seems to rain on Election Day in Georgia, he said.

They can offer an uplifting word to people having a rough day, encouraging them to “stay in the fight,” he told Religion News Service.

But this year, amid the rancorous tenor of national politics and concerns about voter intimidation and even Election Day violence, Honor said he sensed there was a bigger role clergy could play than what he calls “line warming.”

The New Georgia Project is one of several groups training clergy to be precinct chaplains this Election Day (Nov. 3) at polling places across the country.

“Essentially, this is about the defense of democracy. This is about how it is that we stand up for the democratic process and say it is a spiritual value for us to protect people who are trying to participate in the decision-making process for their own lives. It’s beyond the politics of the day or the current events or even what the president is saying,” Honor said.

“Politics is the art of how we organize our life together, and participating in that is deeply godly,” Honor said. 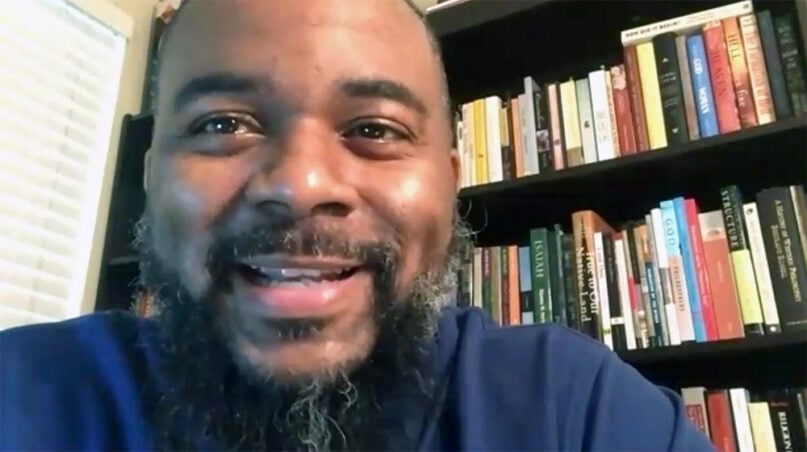 Billy M. Honor participates in a a panel titled “Getting out the Vote in CoC” at the Religion News Association’s virtual conference in September 2020. Video screengrab

The role of precinct chaplain, or poll chaplain, combines the kind of care clergy are used to offering with monitoring the polls for any signs of voter intimidation or suppression.

Their posture is similar to protest chaplains who stand between police and protesters, not with either side, he explained.

RELATED: In emerging role, chaplains are providing spiritual care for activists in movements across the nation

For the New Georgia Project, the idea grew out of conversations with voters who felt disenfranchised or feared their votes weren’t counted. The organization, founded by Stacey Abrams, is a nonpartisan effort to register and engage Georgia voters, particularly those among the “New American Majority”: people of color, people ages 18 to 29 and unmarried women.

The organization realized this year it needed not just to emphasize voter turnout, but also voter protection, Honor said in September on a panel titled “Getting out the Vote in CoC” at the Religion News Association’s virtual conference.

“We’ve spent as much time talking about how to protect the vote as we have turning it out,” he said.

Clergy are a great fit, according to Honor, because the role draws on the things they already do best: providing spiritual care, encouraging people and offering a “ministry of presence.”

And Georgia is “ground zero for the voting rights fight,” he said.

By Election Day, the New Georgia Project, along with Candler School of Theology and Ebenezer Baptist Church, both in Atlanta, will have trained about 200 poll chaplains and assigned them to polling places it has identified as high priorities, he said.

But the idea has spread beyond Georgia. Honor also has been invited to lead online trainings for Middle Church in New York City and the United Church of Christ.

Other groups are offering similar trainings.

The Poor People’s Campaign: A National Call for Moral Revival, led by the Rev. William Barber and the Rev. Liz Theoharis, is partnering with Forward Justice and the NAACP Legal Defense Fund to train nonpartisan poll monitors in 10 states, according to its website.

The Episcopal Church also hosted an online training on Oct. 20 to encourage clergy to offer a “prayerful presence at the polls.” The training was led by Lawyers and Collars, a partnership between Sojourners, Skinner Leadership Institute and the National African American Clergy Network to educate and protect voters in Alabama, Arizona, Florida, Georgia, Michigan, North Carolina, Ohio, Pennsylvania and Wisconsin.

During the training, the Rev. Adam Russell Taylor, acting president of Sojourners, said voter fraud is an “exaggerated myth” and allegations the election is already rigged are “dangerous rhetoric.” But voter suppression, he argued, is a real threat. 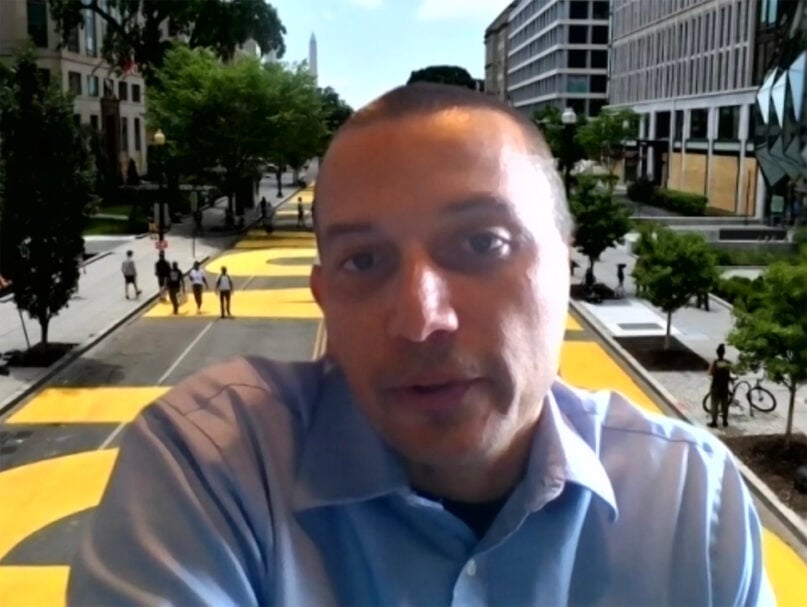 Taylor stressed the role poll chaplains can play in deescalating any tension at voting sites. He encouraged them to wear collars or robes — anything identifying them as clergy.

The Rev. Melanie Mullen, director of reconciliation, justice and creation care for the Episcopal Church, said the mainline denomination has partnered with Lawyers and Collars for several years.

But the Episcopal Church arrived at the idea for poll chaplains independently this summer while discussing what it could look like to be “church outside the walls” as the COVID-19 pandemic and protests for racial justice continued, Mullen said.

“We’re all sort of on the same track, which to us sort of seems like this is the Holy Spirit. It’s the right thing,” she said.

We’re in a time when everybody wants to do something, she said. And, referencing Presiding Bishop Michael Curry, she pointed out: Who better to embody peace in physical places of stress than “church people”? 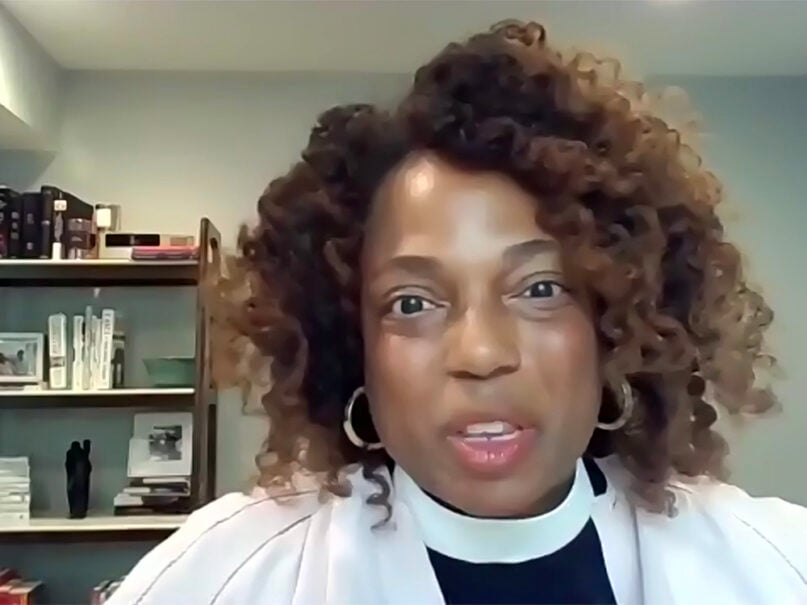 Christian clergy aren’t the only ones planning to show up as a supportive presence in precincts around the country.

The Religious Action Center of Reform Judaism is also partnering with Lawyers and Collars and other groups this election season, encouraging clergy and laypeople to serve as nonpartisan election protection volunteers, according to its director, Rabbi Jonah Dov Pesner.

Voting rights are “personal” for Reform Judaism, Pesner said. Among other things, the Rev. Martin Luther King Jr. used to use the group’s offices in Washington, D.C., and the Voting Rights Act was drafted in its conference room, he said.

He pointed to a teaching in the Talmud that says a leader should not be selected without the community being consulted. In the United States, he said, that consultation means every voice should be heard and every vote counted.

This year, that work may need to continue after Election Day, too.

Pesner said Reform Judaism is preparing rabbis to reassure their congregations should it take days or even weeks for all votes to be counted this year.

“Our rabbis’ role is not only to be a nonanxious presence at the polling sites,” he said.

“We think it’s also really critical that they are community leaders — joining together, by the way, with pastors, imams, priests — all in a full court press in the weeks after the election to reassure the public and say, ‘Take a breath. American democracy is more than 200 years old. We can wait a few weeks if need be.’”

So far, Honor said, nothing very dramatic has happened during early voting at the polling places he’s visited.

He has explained the law to one police officer who tried to turn away poll monitors. He also has seen a lot of voters of all ages and ethnicities. As of Monday, 58 million voters already had cast their ballots across the country, according to NBC News. That number could reach 100 million before Election Day, roughly doubling the number of people who voted early in the last presidential election.

“This is the most active and exciting early voting I’ve ever seen,” Honor said.

He hopes Election Day will be uneventful for voters, too.

But, anecdotally, tensions have been high at some early voting sites, The Washington Post reported.

And the Trump campaign has raised concerns for some about voter intimidation and possible election-related violence.

Unlike nonpartisan efforts, a video on the campaign’s “Army for Trump” website is encouraging Trump supporters to volunteer for “Election Day operations” and monitor every polling place in the country. During the first presidential debate, the president himself urged his supporters to “go into the polls and watch very carefully.”

Nobody is quite sure what to expect in a year that continues to surprise.

The New Georgia Project is prepared for anything, even training poll chaplains how to respond in active shooter situations, Honor said during the RNA conference.

“We hope it’s an overreaction and none of it happens, but we don’t have the luxury of just ignoring it, so we are preparing people in that event,” he said.

For people of faith, Honor said, the right to vote is too important.

“I believe the reason why we have poll chaplains and others out there is because I believe that diversity is our strength,” he said.