(RNS) — Each week Religion News Service presents a gallery of photos of religious expression around the world. This week’s photo gallery includes preparation and celebration of Diwali, a Venezuelan First Communion and more. 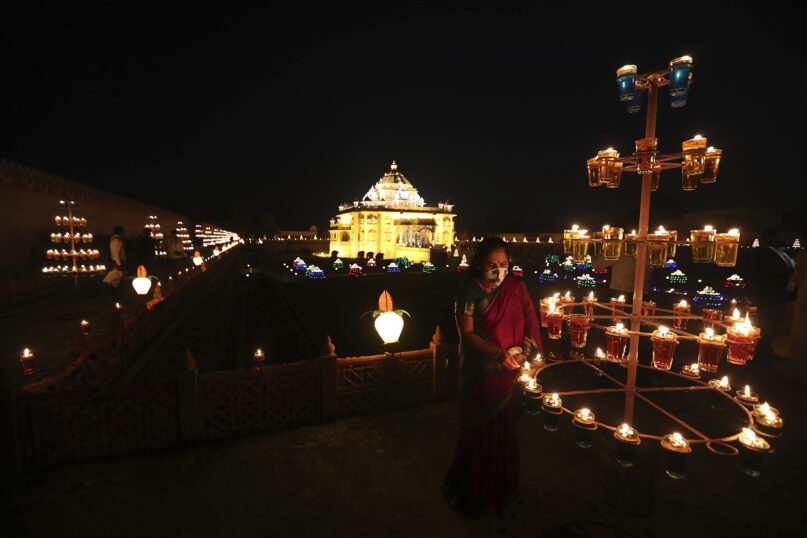 A woman lights lamps at Akshardham temple on the eve of Diwali, the festival of lights, in Gandhinagar, India, Friday, Nov. 13, 2020. Diwali is being celebrated in most parts of the country on Nov. 14. (AP Photo/Ajit Solanki) Indians shop on the eve of the festival of lights, Diwali, in Jammu, India, Friday, Nov. 13, 2020. For Hindus, Diwali is one of the year’s most important festivals, dedicated to the worship of the goddess of wealth, Lakshmi. (AP Photo/Channi Anand) 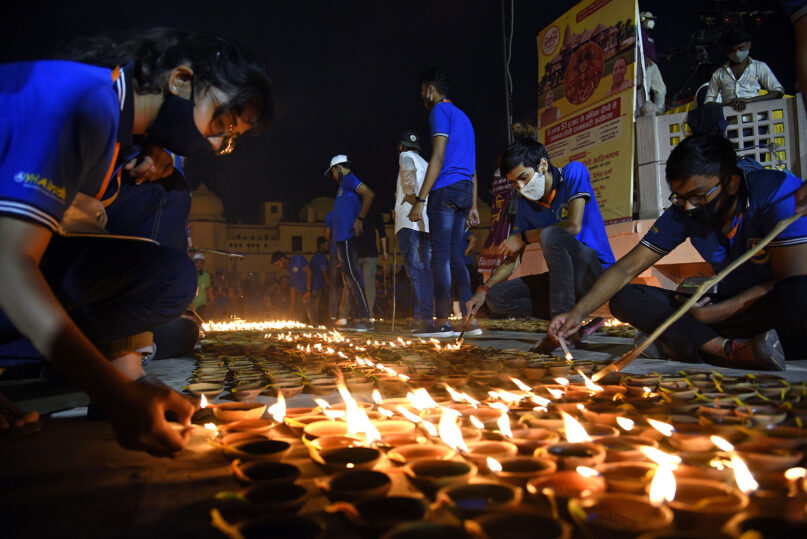 People light lamps on the banks of river Saryu in Ayodhya, India, Friday, Nov. 13, 2020. The northern Indian city of Ayodhya kept its Guinness World Record for a second straight year by lighting more than 584,572 oil lamps and keeping them burning for at least 45 minutes on the banks of the river Saryu as part of the celebration of Diwali, the annual festival of lights. (AP Photo/Rajeev Bhatt) 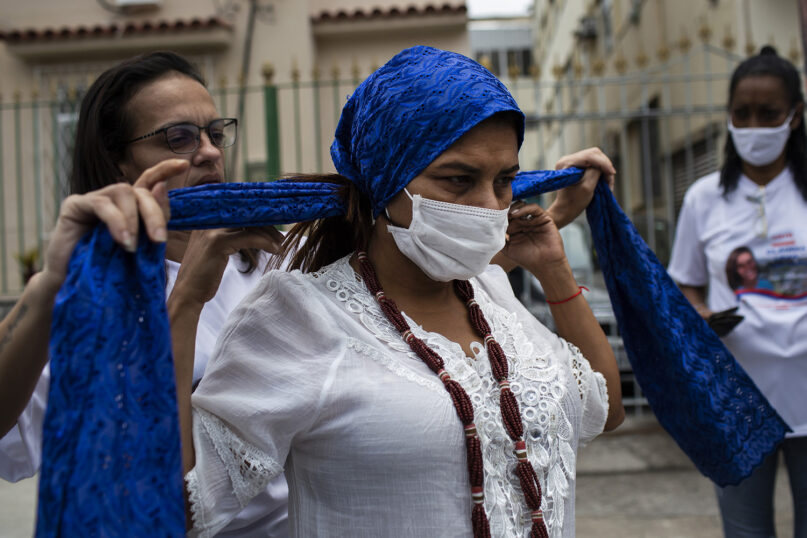 Umbanda Priestess Claudia Lima gets help with her head covering as she prepares to campaign for a seat on the Rio de Janeiro City Council, representing PDT-Axé, in the Piedade neighborhood of Rio de Janeiro, Brazil, Saturday, Nov. 7, 2020. The group derives its name from the initials of Brazil’s Democratic Labor Party and the vital cosmic force in the African-influenced faiths of Candomble and Umbanda. “The temples are being destroyed, we can’t wear our (traditional) clothes on the street. And as long as we don’t have political representatives from our communities, laws will always be used to benefit neo-Pentecostal churches,” said Lima. (AP Photo/Bruna Prado) Indonesian Islamic cleric and the leader of Islamic Defenders Front Rizieq Shihab, center, speaks to his followers upon arrival from Saudi Arabia at Soekarno-Hatta International Airport in Tangerang, Indonesia, Tuesday, Nov. 10, 2020. Thousands of followers of the firebrand cleric joyfully welcomed him at an the airport as he returned home from a 3-year exile in Saudi Arabia after criminal charges, including a pornography case, were dropped. (AP Photo) FILE – In this April 24, 2002 file photo, Washington Cardinal Theodore Edgar McCarrick, right, speaks at a news conference at the Vatican at the conclusion of a two-day meeting between Pope John Paul II and U.S. cardinals. After an extraordinary meeting sparked by a sex abuse scandal, American Roman Catholic leaders agreed to make it easier to remove priests guilty of sexually abusing minors but stopped short of a zero-tolerance policy to dismiss all abusive priests. This week, the Vatican released its report on the Catholic Church’s knowledge of sexual abuse allegations against now ex-Cardinal McCarrick. (AP Photo/Santiago Lyon, File) 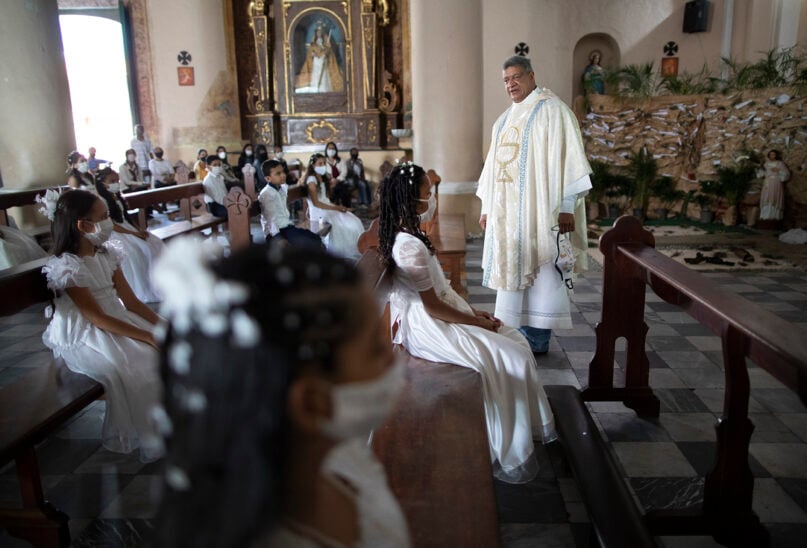 Father Miguel Vargas addresses children making their First Communion during a ceremony at the Dulce Nombre de Jesus’s Catholic church in the Petare neighborhood of Caracas, Venezuela, Saturday, Nov. 7, 2020. After being closed for almost eight months due to the new coronavirus pandemic, the church reopened its doors Saturday for the first group of about 400 children waiting to receive the Sacrament of the Holy Eucharist. (AP Photo/Ariana Cubillos) A child wearing a protective face mask sits in a pew next to a bottle of anti-bacterial gel during a First Communion ceremony at the Dulce Nombre de Jesus’s Catholic church in the Petare neighborhood of Caracas, Venezuela, Saturday, Nov. 7, 2020. After being closed for almost eight months due to the new coronavirus pandemic, the church reopened its doors Saturday for the first group of about 400 children waiting to receive the Sacrament of the Holy Eucharist. (AP Photo/Ariana Cubillos) 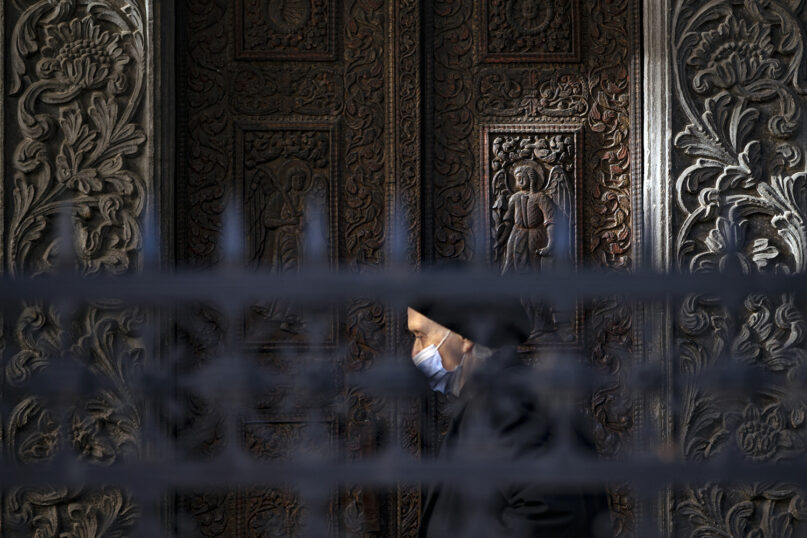 An elderly lady wearing a mask for protection against the COVID-19 infection walks outside the Stavropoleos church, built in 1724, in Bucharest, Romania, Sunday, Nov. 8, 2020. Romania will introduce new restrictions aimed at limiting the spread of the COVID-19 infections following a week when it registered an all time high number of new infections. (AP Photo/Vadim Ghirda) 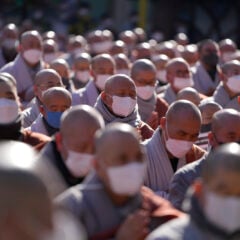