Prior is a research professor of English and Christianity and culture at Southeastern Baptist Theological Seminary and the author of numerous books, including On Reading Well: Finding the Good Life through Great Books (Brazos 2018). Her writing has appeared at Christianity Today, The Atlantic, The Washington Post, First Things, Vox, Relevant, Think Christian, The Gospel Coalition, Religion News Service, Books and Culture and other places. She and her husband live on a 100-year-old homestead in central Virginia with sundry horses, dogs, and chickens. And lots of books.

“While it has been a joy to be published in a variety of publications over the years, I am very excited to have a regular home now with RNS. While RNS carries a wide range of views and news from across the religious spectrum, I consider it a great honor and responsibility to be a voice for the tradition I am part of as a conservative evangelical and Southern Baptist. These are fractious, divided days for the church, and there are pains and problems we must reckon with. But even more, there is reason for joy and hope. And I hope that my words here will ultimately serve more to call in than to call out,” said Prior. 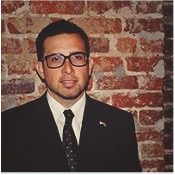 Joseph Hammond, located in the greater Los Angeles area, primarily will be reporting on American Islam, though with his years of international reporting experience and Arabic language fluency, we also expect he will report on Islam in the Middle East and Africa. Hammond joins RNS after more than a decade of reporting internationally, including from the Congo, Sri Lanka, Rwanda, Iraq, Egypt, Somalia, and elsewhere. Hammond can be contacted at [email protected]

“I am excited to join the team at a prestigious organization like RNS. I look forward to reporting on a range of issues from Islam in America to issues involving the Middle East and Africa as well as interfaith issues,” said Hammond.

Hammond’s work has appeared in a number of media outlets including The Economist, Forbes, Newsweek, International Business Times, Radio Free Europe, and international editions of Esquire and Rolling Stone, among others. He is the first American selected to be in the African Union’s Interfaith Dialogue on Violent Extremism.

“We’re fortunate to be able to bring Karen Swallow Prior’s singular voice to our readers — Christians, of course, and anyone who has an interest in how faith operates in American culture — as well as Joseph’s incisive reporting on Islam, from the Middle East to Muslim TV stars here at home,” said RNS Editor-in-Chief Paul O’Donnell.

Prior and Hammond join their RNS colleagues in highlighting at this important time the vital role religion plays in people’s daily lives and in major events in the U.S. and abroad.

“We welcome Karen Swallow Prior and Joseph Hammond to the RNS family,” said RNS’s publisher Deborah Caldwell.  “They will contribute to RNS telling some of the most important stories of our time and, in so doing, help people better understand the forces shaping our inner lives and the world around us.”

Religion News Service is an independent, nonprofit and award-winning source of global news on religion, spirituality, culture and ethics, reported by a staff of professional journalists. Founded in 1934, RNS seeks to inform readers with objective reporting and insightful commentary and is relied upon by secular and faith-based news organizations in a number of countries. RNS is a subsidiary of the Religion News Foundation. For more information, visit religionnews.com.