VATICAN CITY (RNS) — On his last full day in Iraq, Pope Francis told struggling Christians in the war-weary country to hold on to their roots and to forgive their oppressors, the better to put their energy toward restoring their hearts and homes destroyed by Islamic State occupation.

“Now is the time to rebuild and to start afresh, relying on the grace of God, who guides the destinies of all individuals and peoples,” the pope said in Qaraqosh, a Christian town in Iraq’s Nineveh Plains, on Sunday (March 7).

“You are not alone! The entire church is close to you, with prayers and concrete charity. And in this region, so many people opened their doors to you in time of need,” Francis said.

Francis, the first-ever pontiff to visit Iraq, has promoted a message of religious dialogue, tolerance and peace. Christians in the Nineveh Plains, the religiously diverse area east and northeast of the city of Mosul that is sometimes called “the cradle of Christianity,” suffered greatly when IS rose to power in 2014. Churches and places of worship were destroyed, and thousands of people were forced to leave their homes.

At Qaraqosh’s Church of the Immaculate Conception, Francis was greeted by Ignatius Ephrem Joseph III Yonan, the Syriac Catholic Patriarch of Antioch and all the East of the Syriacs. Children lined the aisles in excitement for the pope’s visit.

“Our gathering here today shows that terrorism and death never have the last word. The last word belongs to God and to his Son, the conqueror of sin and death,” the pope said, having seen the devastation that still marks the Iraqi city. “Even amid the ravages of terrorism and war, we can see, with the eyes of faith, the triumph of life over death.”

Francis underlined the importance of new and older generations coming together to build a better future without forgetting the past. “I encourage you: do not forget who you are and where you come from! Do not forget the bonds that hold you together! Do not forget to preserve your roots!” he said. 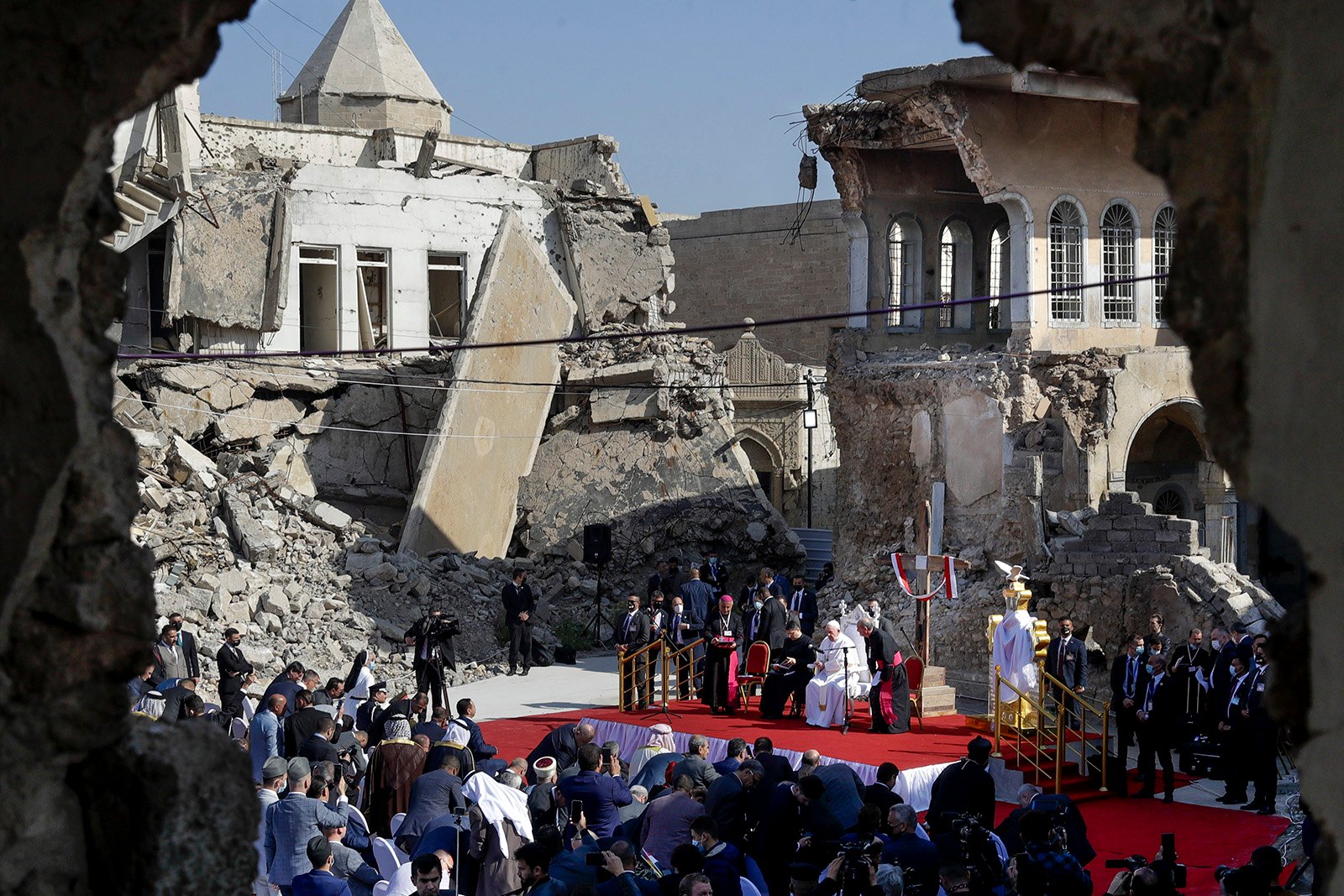 Pope Francis, surrounded by shells of destroyed churches, leads a prayer for the victims of war at Hosh al-Bieaa Church Square, in Mosul, Iraq, once the de-facto capital of the Islamic State group, Sunday, March 7, 2021. The long 2014-2017 war to drive IS out of the region left ransacked homes and pulverized buildings around the north of Iraq, all sites Francis visited on Sunday. (AP Photo/Andrew Medichini)

The pope heard the testimonies of several lay and religious Christians who were victims of IS violence. Doha Sabah Abdallah, a woman from Qaraqosh, described the moment she realized that her son was killed by a bomb during the incursion.

“We, the survivors, try to forgive the aggressor, because our teacher Jesus forgave his executioners,” the woman said. “By imitating him in our suffering we testify that love is more powerful than anything.”

Francis told those assembled that forgiveness “is a key word” for the broken Christian community in Iraq. “What is needed is the ability to forgive, but also the courage not to give up,” he said.

The pontiff also made a powerful appeal for women and mothers in the Muslim-majority country. “May women be respected and protected! May they be shown respect and provided with opportunities!” he said, asking the Virgin Mary to intercede on their behalf.

Earlier, Francis visited Mosul, where he led a prayer for victims of the war at Church Square, lined by four churches of different denominations.

The pope condemned the “cruel” and “barbarous” destruction of the city’s ancient places of worship and the displacement and murder of many Christians, Muslims and Yazidi’s. “Today, however, we reaffirm our conviction that fraternity is more durable than fratricide, that hope is more powerful than hatred, that peace is more powerful than war,” he added.

In the afternoon, Francis returned to Erbil to celebrate Mass at the Franso Hariri Stadium, which was only filled to roughly one-third capacity, or about 10,000 people, to prevent the spread of COVID-19.

Addressing the largest crowd of this papal visit, Francis pled with Iraqis to seek unity. Jesus, he said, “liberates us from the narrow and divisive notions of family, faith and community that divide, oppose and exclude, so that we can build a Church and a society open to everyone and concerned for our brothers and sisters in greatest need.”

The pope called on Christians to become “instruments of God’s mercy and peace, patient and courageous artisans of a new social order.”

He thanked the government and religious authorities and extended his “heartfelt greeting to the beloved Kurdish people.” The pope also praised the Christian organizations that are active in Iraq by helping promote interreligious dialogue in the country.

“That is one of the reasons that led me to come as a pilgrim in your midst, to thank you and to confirm you in your faith and witness,” Pope Francis said. “Today, I can see at first hand that the Church in Iraq is alive, that Christ is alive and at work in this, his holy and faithful people.”

Pope Francis will leave Iraq to return to the Vatican Monday (March 8).