WASHINGTON (RNS) — The Society of Jesus has announced plans to raise $100 million for the descendants of enslaved people it once claimed to own, making the Roman Catholic order’s initiative one of the largest financial efforts by any group to try to atone for the institution of slavery and address racial injustice in the United States.

The initiative, first reported by The New York Times, operates in partnership with the GU272 Descendants Association, which takes its name from the 272 people enslaved and sold by Georgetown University. The groups formed the Descendants Truth and Reconciliation Foundation, which represents more than 10,000 descendants and stems from the revelation that members of the Society of Jesus, or Jesuits, used profits from slavery to finance clergy and construct schools — including Georgetown.

In addition to raising $100 million for descendants and racial reconciliation efforts, the initiative maintains a longer-term goal of raising $1 billion, according to America Magazine.

“Through the Descendants Truth and Reconciliation Foundation, we will restore honor and dignity to our ancestors by institutionalizing these goals for our children, our children’s children, and descendants for centuries to come.” 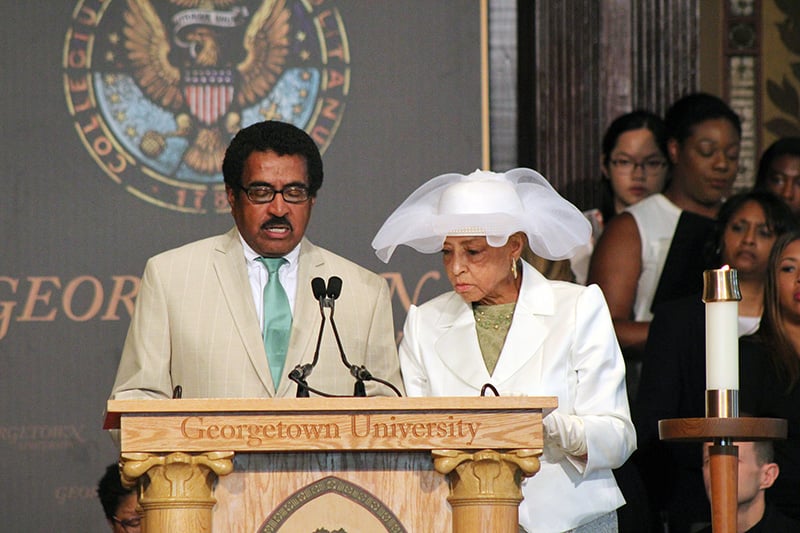 The Rev. Leroy Baker and Onita Estes-Hicks, two descendants of slaves sold by Maryland Jesuits, read from the biblical Book of Isaiah during the “Liturgy of Remembrance, Contrition, and Hope” at Georgetown University on April 18, 2017. RNS photo by Adelle M. Banks

The GU272 group first approached the Rev. Arturo Sosa, the Jesuit superior general, in 2017 after learning about the order’s historical reliance on slavery.

Sosa responded by apologizing for the Society of Jesus’ actions and declaring, “Jesuit slaveholding in the United States, and in particular the sale of 272 enslaved persons from the Jesuits in southern Maryland to purchasers in Louisiana, was both a sin and a betrayal because the Society robbed your ancestors of their human dignity.”

Joseph Stewart, acting president of the Descendants Truth and Reconciliation Foundation, noted that “for more than 400 years, our country has denied the persistent human destruction caused by slavery and the conscious and unconscious racism that divides our communities and nation.”

According to the press release, Stewart is also one of the more than 1,000 descendants of Isaac Hawkins, one of many enslaved people who were “sold to save Georgetown University from financial ruin.” In 2017, Georgetown renamed a building in Hawkins’ honor.

Stewart added: “After 182 years, Descendants and Jesuits have come together in the spirit of truth, racial healing and reconciliation, uniquely positioning the Descendants Truth & Reconciliation Foundation to set an example and lead America through dismantling the remnants of slavery and mitigating the presence of racism.”

The Jesuits’ initiative is one of several ongoing campaigns among faith groups to offer reparations for slavery and combat racial inequality. In January, several Episcopal churches in Maryland committed hundreds of thousands of dollars to reparations and racial justice campaigns in the state. In August of last year, Middle Collegiate Church in New York pledged $200,000 — about a tenth of its budget — to provide housing assistance and youth anti-racism training as part of a reparations effort.