(RNS) — Natasha Helfer, the Mormon therapist whose views on sexuality resulted in a disciplinary council on Sunday, has been excommunicated from the Church of Jesus Christ of Latter-day Saints.

Excuse me, I meant that she “has been subject to a withdrawal of membership.” “Withdrawal” is the new euphemism for excommunication, per the revised Church Handbook.

The term also provides us an apt visual for what went down on Sunday evening, when the witnesses for Natasha’s defense weren’t even allowed into the church building. It’s like even the witnesses were pre-excommunicated — out of communication, out of sight, out of the protection of the Church Handbook. Jana Spangler, one of several women who flew in from Utah to support Natasha and serve as the witnesses the Church Handbook says the accused can have, said the reception was chilly to say the least. Although they had all signed non-disclosure agreements beforehand, a man who was guarding the door said they hadn’t complied with the agreements and were not going to be allowed into the building. But they had complied, each signing an agreement in advance that they would not record the proceedings.

“They saw us as the enemy,” Spangler said. “We were five docile women standing there in our Sunday dress. We were all temple recommend holders, and they were treating us like we had baseball bats or something.” 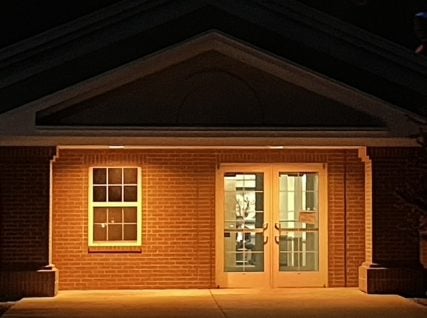 A doorkeeper sits inside the chapel of the Church of Jesus Christ of Latter-day Saints. Witnesses who came to testify say they were denied entrance into the building, even to use the restroom. Photo by Jody England Hansen.

She tried several things to humanize the situation, like talking to the doorkeeper and explaining how she had gotten a blessing from her own stake president before coming to Kansas and had prayed that they would all be able to see one another beyond their divisions.

Nothing got through to him. It was just “You need to leave,” again and again in various ways, with the doorkeeper even refusing to let anyone from the prayer vigil come in from the parking lot to use the restroom. The church called the police on the vigil attendees.

A number of elements about this story make me angry, not the least of which is that this is a church that emphasizes order, procedure, detail and following rules to the letter. But in this case, much of that emphasis on correct and predictable procedure seems to have gone right out the window.

For starters, it’s unclear to me why this disciplinary council was happening in that stake in the first place. (Toto, Helfer isn’t in Kansas anymore. She has been living in Utah for over a year.)

Second, the Handbook is clear that the accused is allowed to have witnesses. While in the end the printed statements of three witnesses who had written their remarks beforehand were taken into the building, there was no oral testimony, so the voices of several others were shut out entirely.

Third, I’ve never heard of a time limit being preset for a hearing. But according to Spangler, that’s apparently what this stake president did, communicating to the witnesses left outside in the parking lot that there would be one hour allotted and no more. Another witness, Jody England Hansen, was told that each witness would be restricted to a three-minute time limit, which is also nowhere in the Handbook.

Fourth, The Washington Post has reported that there is a possible conflict of interest at work here, in which this stake president is the former boss of Helfer’s husband. What in the world? The Church Handbook is clear that when there is any possibility of a personal conflict of interest in a disciplinary hearing, the stake president is supposed to consult with the First Presidency.

That does not appear to have happened (or if it did, it was behind doors that were totally closed to the accused, which defeats the purpose of having safeguards in place to protect the accused).

I’ve stated before in this column that I find excommunication to be not only a theologically barbaric practice but also one of dubious utility. It doesn’t come from the example of Jesus. It also doesn’t work.

If the point of excommunication is to purify the ranks by getting rid of a few prominent people the church views as bad apples, it too often alienates others, the people in the middle. Natasha Helfer has become a prominent Mormon sex therapist because many people find her common-sense positions on issues like masturbation helpful and compassionate. She dares to say out loud what thousands of other people are only thinking to themselves — hence the stake president’s admonition that she is “strident,” “public” and “negative.” (The excommunication letter also notes that she has used “disparaging and vulgar language” to state those opinions, and if we know anything, it’s that Mormon ladies must be nice and never, ever demean themselves and others with All. The. Swears.)

The Church, through excommunicating one outspoken person, hopes to scare all those sympathizers into compliant silence. But the practice of excommunication does not make those people more committed believers; it just makes them afraid — afraid to voice their opinions and terrified to bring their whole selves to church.

Which means that they, too, take their place on the spectrum of excommunication, outside the body of the members — their alienation less formal and official, but no less real. 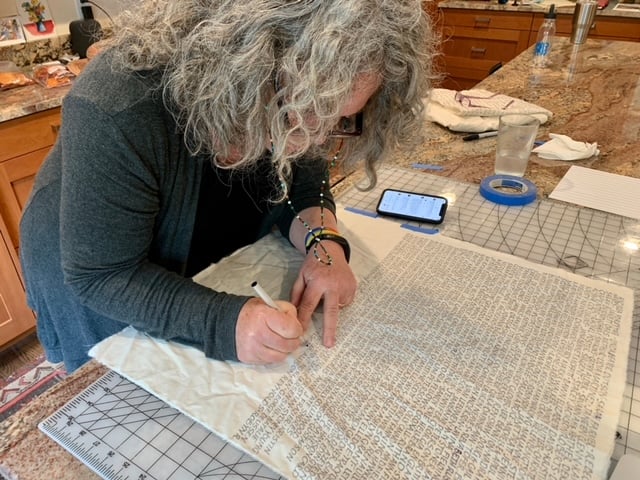 Jody England Hansen writes the names of more than 700 people who could not attend in person to express their support for Helfer but wanted to communicate their solidarity.