(RNS) — “It sounds too good to be true,” said the Rev. Stephen Planning, president of Jesuit Gonzaga College High School in Washington, D.C., when he heard of a way the school could reduce its carbon footprint, comply with the global Jesuit order’s climate push and provide a revenue stream, all at the same time.

The answer was solar panels.

“Laudato Si’,” Pope Francis’ 2015 encyclical on the environment, has stimulated a lot of discussion in the Catholic Church over how to take up the pontiff’s exhortation to respond to global warming. In response to the encyclical, the Jesuits established “Caring for our Common Home” as one of their four universal apostolic preferences.

The encyclical “provided the underlying philosophical, moral and religious impetus” for the school’s decision to go solar, said Planning.

“There has been a move on the part of religious institutions, Catholic schools, Jesuit schools in particular, to find ways to respond to the church’s desire to extend social justice theory to our planet, and to respond not just as individuals but as an institution,” explains Planning.

The topic of solar panels presented itself in April 2017 when a small tornado ripped part of the roof off St. Aloysius Gonzaga Church, the school’s chapel. “A lot of people started reaching out to me,” reported Planning, “saying, ‘Hey, can we put solar panels on the roof of the church during the repairs?’”

That proved to be impossible because the church, built in 1859, is designated a historic building in the city of Washington. As a result, the school could not do anything that would alter the façade of the church without permission from the city’s Historic Preservation Review Board. 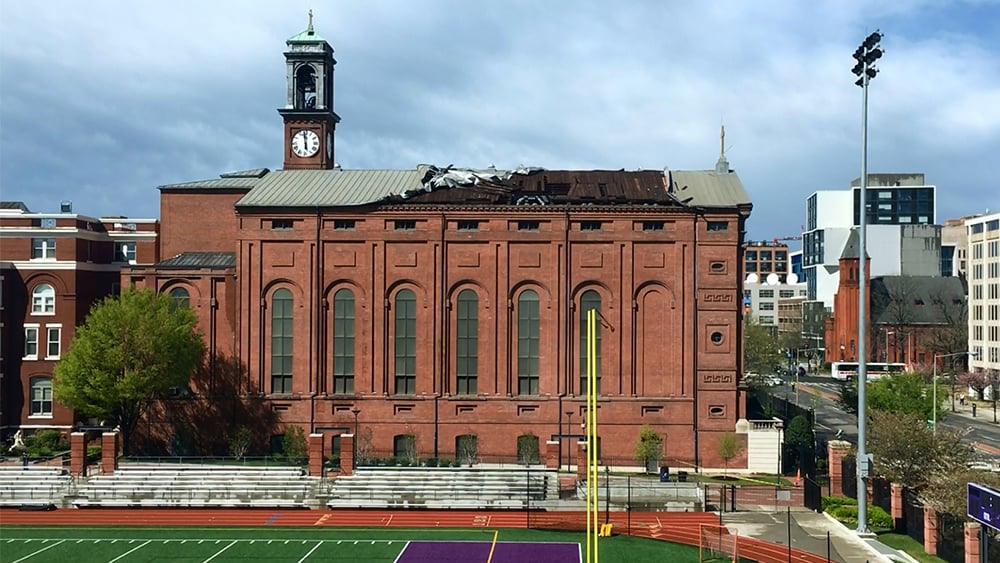 Damage to the roof of St. Aloysius Gonzaga Church in 2017 in Washington. Photo courtesy of Gonzaga College High School

But “there was a groundswell of support to do something, even though nobody knew what it would look like,” said Planning. “There was no opposition whatsoever.”

While Planning, as president, supported the idea of solar panels, Stephen Neill, the school’s chief operating officer, was the one who had to turn the idea into a reality.

Neill had heard of other schools and religious institutions doing similar projects, and he was already receiving proposals from companies that wanted to install the solar panels.

It was up to Neill to make sure the school got the best deal. How much would the system cost? How much it would save? What public incentives were available for a place like Gonzaga?

“There are a lot of these investor groups out there, some good, some bad, all aggressively approaching institutions,” explains Neill. Some even touted their “Catholic” credentials but offered inferior proposals.

“We spent a lot of our time doing our due diligence in terms of who our investor group would be and their experience installing solar systems and selling these credits,” explains Neill. He wanted to make sure “they could back up everything that they were saying they were going to do for us.” He talked not only to the companies but to those institutions for whom they had installed solar systems.

What he discovered was that in the District of Columbia, public incentives for a building owner to go solar, even a nonprofit, are very strong.

The District of Columbia has some of the most aggressive renewable energy goals in the country. By 2032, almost all the energy in D.C. must be sourced from renewable sources located within the district itself. Energy suppliers that do not meet that goal can expect to be heavily fined, currently at $500 per MwH.

The way they avoid these fines is by purchasing Solar Renewable Energy Credits that are generated by others with solar panels. Since there is little open space that is not federal property, roofs of buildings became the prime place for the panels. This encouraged investors to seek out building owners, including nonprofits, where the investors would install solar panels and then sell the SRECs to the local energy companies like Pepco and Constellation. 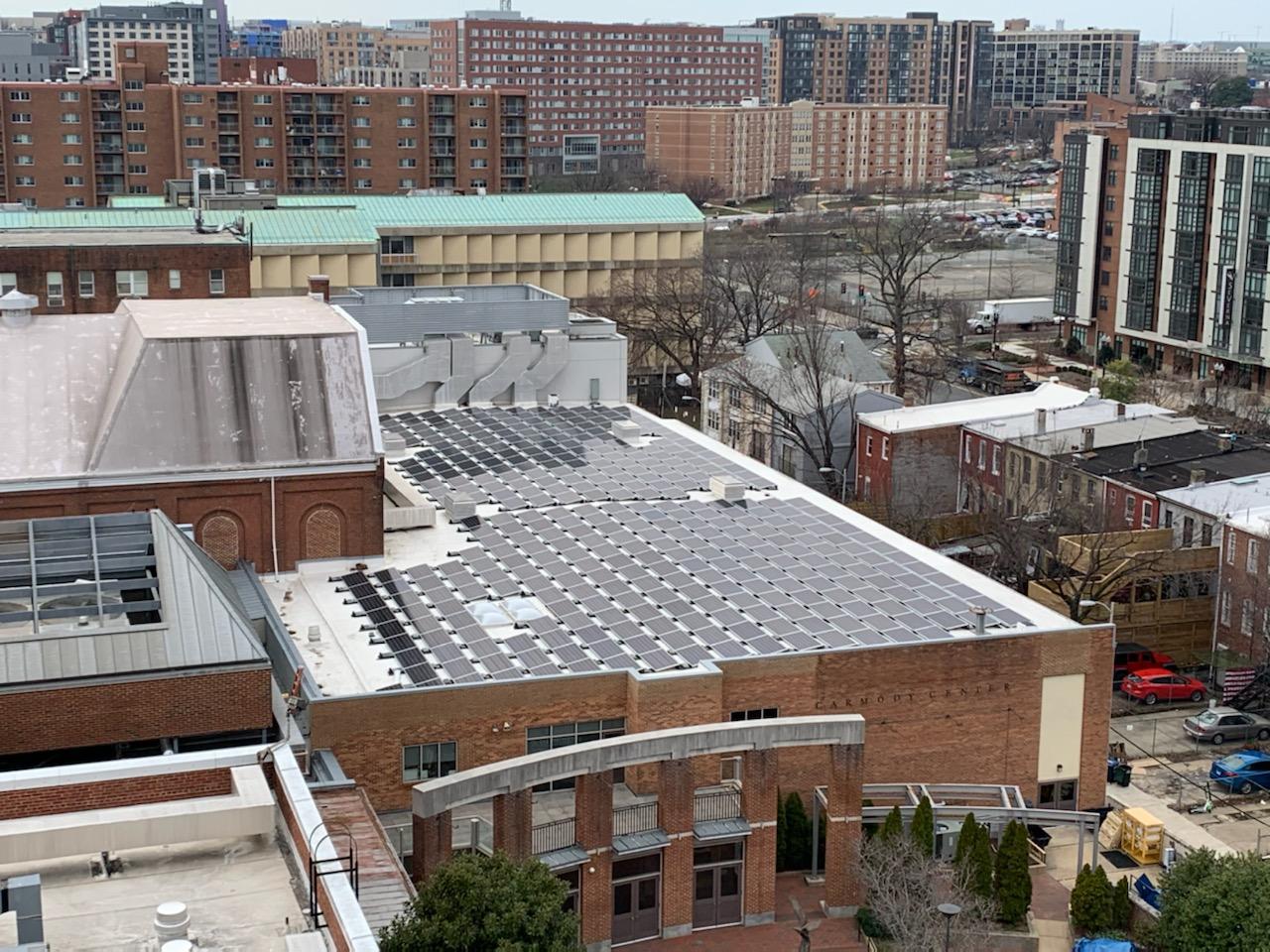 Ultimately, Gonzaga found an investment company, SPH Solutions, willing to pay for an $800,000 solar system at no cost to the school. The company owns and maintains the 300-kilowatt system with 757 solar panels and pays Gonzaga $20,000 a year in rent for its roofs.

More importantly, Gonzaga gets all the energy produced, which covers 20% of the school’s electricity consumption, saving the school $75,000 a year. If the system produces more energy than the school uses, for example on holidays, the surplus rolls back into the grid and the electric meter runs backward. Luckily, the system was turned on the week the school had to shut down because of COVID-19.

The investors make money by selling the Solar Renewable Energy Credits to local energy companies. After 10 years, the system will belong to Gonzaga, and if the energy credit system is still in place, the school will be able to sell the SRECs itself and make even more money.

The installation by Solar Gaines took only three months from signing the contract to completion, with the full cooperation of the city and Pepco, the local utility company. For Gonzaga, it was cash-flow positive from day one.

Gonzaga also saw the solar system as an educational opportunity. “Our science department has been able to incorporate this into our curriculum to show the kids the technology,” explains Planning. A website allows the students to monitor how much energy the system is generating.

RELATED: Protecting the climate is loving our neighbor

Gonzaga is not the only Catholic institution in the District to install solar panels. Others include Georgetown Visitation Preparatory School, the Washington Jesuit Academy and Catholic Charities DC, which installed the largest solar array in the District.

To religious institutions considering the installation of solar panels, Neill would tell them “not to think at first blush that this is too good to be true because increasingly more and more states are trying to find creative ways to encourage these types of programs. So really investigate what is available at the state and local level to support programs like this.”

Not every parish or school has a COO like Neill, so bishops would do well to facilitate these programs through a central office at the diocesan finance office. In this way, the church can concretely implement “Laudato Si'” and help reduce global warming.

Solar panels are a great opportunity for religious institutions to do well while doing good.