CHICAGO (RNS) — Five months after allegations were first made against him, the Catholic Archdiocese of Chicago has concluded there is “insufficient reason to suspect” the Rev. Michael Pfleger is guilty of past sexual abuse.

The result of the investigation by an independent review board was announced Monday (May 24) in a letter from Cardinal Blase Cupich to the church Pfleger has led for years, the Faith Community of St. Sabina in Chicago’s Auburn Gresham neighborhood.

“I’m so relieved and glad this nightmare is over,” Pfleger said later that day at a press conference.

“If anything, I’m more emboldened, and I’m stronger, and I’m ready to fight more than ever in my life,” he added.

Pfleger, 71, will return to his position as senior pastor of St. Sabina on June 5, according to the letter from the cardinal, who leads the archdiocese.

“The weekend he will return is the Feast of Corpus Christi when we celebrate that we are one in the Body of Christ, sharing each other’s joys and sorrows,” Cupich said in his letter.

“It is in this spirit that I ask you to welcome back Father Pfleger, thereby helping him take up again the ministry that has distinguished St. Sabina in the archdiocese and beyond.”

The cardinal said Pfleger had agreed to take two weeks before returning to St. Sabina to prepare spiritually and emotionally, “realizing that these months have taken a great toll on him.”

Pfleger said he will use that time to plan how the church will combat violence this summer in Chicago and to stabilize some of the funding the church and its programming have lost this year.

Speaking to supporters and the media from the steps of St. Sabina’s, his voice wavering with emotion at times, the firebrand priest described the past five months — being unable to speak publicly about the allegations or to work the long days surrounded by people that he enjoys — as the “most difficult and challenging time in my entire life.”

He also committed to return to ministry “with renewed energy and with a deepened commitment to St. Sabina’s, to the city of Chicago and to the community we serve.”

“This has been a humbling experience, but one which I believe will allow me to emerge stronger in faith and even more understanding of those suffering and more committed than ever to serving you. I will be devoted to healing our church from the hurt it has felt and gone through and continuing our fight — the fight against violence and racism and poverty,” he said.

“I’ve always been who I am, and I’m not gonna change that,” he said. 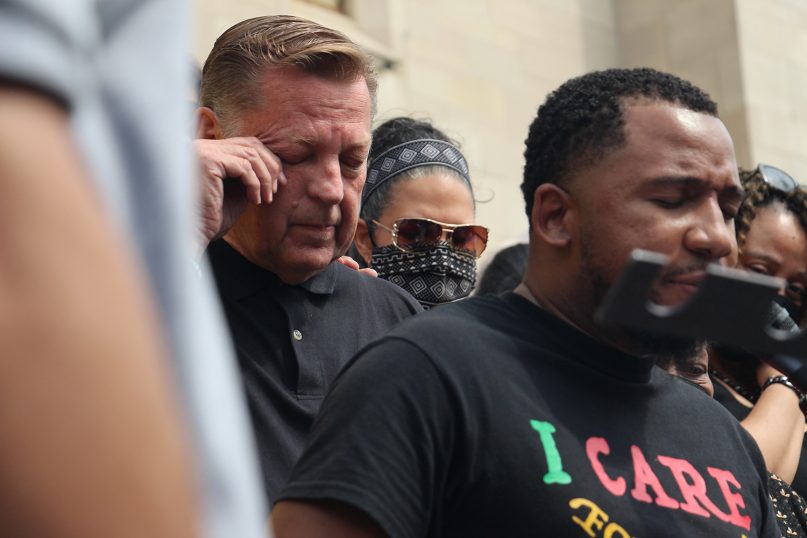 Supporters pray for the Rev. Michael Pfleger as he wipes his eye on May 24, 2021, outside his church, the Faith Community of St. Sabina in Chicago’s Auburn-Gresham neighborhood. RNS photo by Emily McFarlan Miller

The well-known priest temporarily stepped down from ministry in January amid allegations of sexual abuse of a minor more than 40 years ago. Three men since have accused him of sexually abusing them decades ago — allegations Pfleger and his attorneys have denied.

The investigation was met with backlash from parishioners at St. Sabina, who reportedly flooded the archdiocese’s phone lines in support of Pfleger, staged rallies, threatened to withhold $100,000 in monthly dues and sent 1,300 letters.

The Illinois Department of Children and Family Services also concluded there wasn’t sufficient evidence to show Pfleger was a threat.

Pfleger thanked those supporters Monday, many of whom surrounded him on the church’s steps and cheered as he spoke.

“It is with deep thanks that I speak today to all of you who stood with me, unwavering in your knowledge of my character and in your belief in my innocence,” he said.

He noted supporters must’ve skipped work that afternoon to be there for him, joking that he forgave them for lying to their bosses to do so.

Pfleger also said he is praying for the two brothers who made the initial allegations against him.

“I forgive them. Forgiveness is not only about them, it’s about me, and I pray for them,” he said.

“I want to move forward.”

Pfleger came to St. Sabina Church as an associate pastor in 1975, according to the Chicago Sun-Times.

He is well known in the city for his activism, particularly against gun violence and racism (Pfleger is white, and St. Sabina and its surrounding community is predominantly Black).

Pfleger is no stranger to controversy. He took a leave of absence after criticizing then-Sen. Hillary Clinton during the 2008 presidential primaries and was suspended for a month in 2011 by then-Cardinal Francis George after insisting he’d leave the Roman Catholic Church before he’d leave St. Sabina to take an assignment at a nearby Catholic high school, according to NBC 5 Chicago.

“This past year has been a time of great trial for us all, and our church, our city and society are in need of your witness to Jesus’ love,” Cupich wrote in his letter. “Please know you will have my support and prayers as you continue to be a light in the community.” 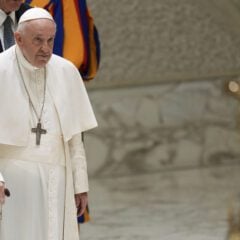 Signs of the Times
The Catholic bishops support gun control. Why don’t we hear more about it?
Follow us on Facebook!
Submit your photos to RNS