(RNS) — The American mosque is becoming more American. At least according to Ihsan Bagby, who has authored a report for the Institute for Social Policy and Understanding based on a a new survey of American mosques. The report, conducted every 10 years, found American Sunni mosques are increasingly a melting pot of traditions, blending various schools of Islamic jurisprudence or madhabs.

In many ways this pluralistic approach indicates a return to tradition. Even, for example, in regard to the roles of men and women. Findings in the report suggest the American mosque is reviving certain leadership positions for women in the mosque that, while common in the earliest days of Islam, have fallen out of practice.

RELATED: New initiative seeks to get Muslims to the golf course

“American mosque leaders lean toward an understanding of Islam that adheres to the foundational, textual sources of Islam (Qur’an and Sunnah) but are open to interpretations that look to the purposes of Islamic law (i.e., looking to the spirit and wisdom of the law) and modern circumstances,” the report said.

The ISPU study builds on direct interviews and a standardized questionnaire. The authors of the report spoke directly with hundreds of mosque leaders in conducting the research for the report.

In many countries in the Islamic world, a single madhab dominates and while American immigrants from those countries maintain those practices, their mosques often mix traditions in order to appeal to a wide potential pool of congregants.

The specific tenets of a madhab can vary, from details on prayer rituals to ordinances on pet ownership. A strong appeal to the perspective of a single madhab, especially in mixed immigrant communities, could turn off portions of the congregation, whereas a pan-madhab approach allows for disparate trends to blend together in the daily life of the mosque.

“Anecdotally, I know someone who is on the board of a mosque in Atlanta who feels he has to remind everyone that it is not a Hanafi mosque,” said Bagby.

Hanafi and Shafi’i mosques are the most common in America, according to Bagby. However, he noted, mosques following the Maliki madhab are on the rise, due to recent migration from Africa and because many American converts are drawn to its more flexible interpretation of a number of Islamic practices.

In traditional Islamic practice, individuals may blend traditions to a certain extent, but in the past few generations, as mosques have turned into state institutions in many majority-Muslim countries, adherence to a particular madhab has become more strict.

In America, a number of factors have likely influenced mosque practices. The new report notes in particular engagement in politics as well as increased use of English in the daily life and practices of the community. In the institute’s 2000 survey, 53% of American mosques used English as the primary language for the jumah sermon; that compares with 72% today. The report also noted 51% of the mosques surveyed hosted a politician for a visit or talk. This is a higher level of political engagement than Christian churches, according to Bagby.

“A large number of mosques support efforts like these not necessarily for political reasons but, rather because they believe they advance relations between Muslims and non-Muslims. This is a rather large number and it reflects those changes,” he said.

The study found that a large number of mosques are involved in interfaith efforts designed to build ties between the Muslim community and members of other faith groups. The report also noted 67% of mosques in the United States have women serving on their boards. This marks a noteworthy rise from earlier editions of the report that found only 50% of mosques had women on their boards in 2000 and 59% in 2010.

“The American mosque is more integrated from a gender perspective than mosques elsewhere, such as not having a separate divider between areas where men and women pray and (other practices), but these mosques would argue that these practices are not innovation but rather returning to practices that are rooted in the practices of the earliest Muslims, ” Bagby said. 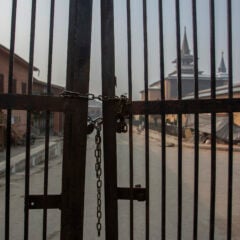